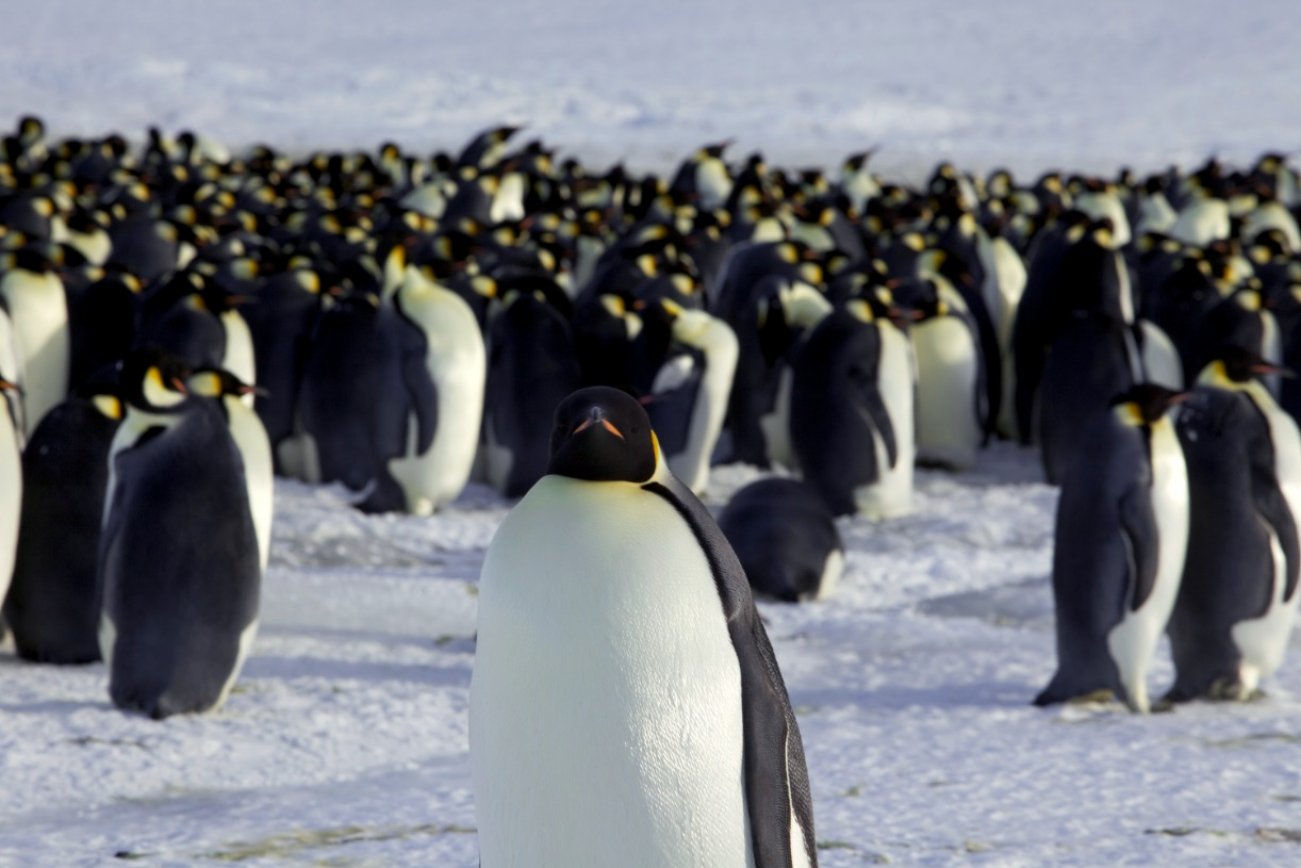 Penguins are at risk as a warming climate affects sea ice in Antarctica.

Emperor penguins thrive on Antarctica’s coastlines in icy conditions any human would find extreme. Yet, like Goldilocks, they have a narrow comfort zone: If there’s too much sea ice, trips to bring food from the ocean become long and arduous, and their chicks may starve. With too little sea ice, the chicks are at risk of drowning.

Climate change is now putting that delicate balance and potentially the entire species at risk.

In a new study, my colleagues and I show that if current global warming trends and government policies continue, Antarctica’s sea ice will decline at a rate that would dramatically reduce emperor penguin numbers to the point that almost all colonies would become quasi-extinct by 2100, with little chance of recovering.

That’s why the U.S. Fish and Wildlife Service is proposing to list the emperor penguin as “threatened” under the Endangered Species Act. The proposal will be published in the Federal Register on Aug. 4, 2021, starting a 60-day public comment period.

The greatest threat emperor penguins face is climate change. It will disrupt the sea ice cover they rely on unless governments adopt policies that reduce the greenhouse gases driving global warming.

The U.S. Endangered Species Act has been used before to protect other species that are primarily at risk from climate change, including the polar bear, ringed seal and several species of coral, which are all listed as threatened.

Emperor penguins don’t live on U.S. territory, so some of the Endangered Species Act’s measures meant to protect species’ habitats and prevent hunting them don’t directly apply. Being listed under the Endangered Species Act could still bring benefits, though. It could provide a way to reduce harm from U.S. fishing fleets that might operate in the region. And, with expected actions from the Biden administration, the listing could eventually pressure U.S. agencies to take actions to limit greenhouse gas emissions.

I first saw an emperor penguin when I visited Pointe Géologie, Antarctica, during my Ph.D. studies. As soon as I set foot on the island, before our team unpacked our gear, my colleagues and I went to visit the emperor penguin colony located only a couple of hundred meters from the French research station – the same colony featured in the movie “March of the Penguins.”

We sat far away to observe them through binoculars, but after 15 minutes, a few penguins approached us.

People think that they are awkward, almost comical, with their hobbling gait, but emperors walk with a peaceful and serene grace across the sea ice. I can still feel them tugging on my shoelaces, their eyes flickering with curiosity. I hope my children and future generations have a chance to meet these masters of the frozen world.

Researchers have studied the emperor penguins around Pointe Géologie, in Terre Adélie, since the 1960s. Those decades of data are now helping scientists gauge the effects of anthropogenic climate change on the penguins, their sea ice habitat and their food sources.

The penguins breed on fast ice, which is sea ice attached to land. But they hunt for food within the pack ice – sea ice floes that move with the wind or ocean currents and may merge. Sea ice is also important for resting, during their annual moult and to escape from predators.

The penguin population at Pointe Géologie declined by half in the late 1970s when sea ice declined and more male emperor penguins died, and the population never fully recovered from massive breeding failures – something that has been occurring more frequently.

To assess whether the emperor penguin could qualify for protection under the Endangered Species Act, the U.S. Fish and Wildlife Service encouraged an international team of scientists, policy experts, climate scientists and ecologists to provide research and projections of the threats posed by climate change to emperor penguins and their future survival.

Every colony will be in decline by 2100

Emperor penguins are adapted to their current environment, but the species has not evolved to survive the rapid effects of climate change that threaten to reshape its world.

Decades of studies by an international team of researchers have been instrumental in establishing the need for protection.

Seminal research I was involved in in 2009 warned that the colony of Pointe Géologie will be marching toward extinction by the end of the century. And it won’t just be that colony. My colleagues and I in 2012 looked at all known emperor penguin colonies identified in images from space and determined that every colony will be declining by the end of the century if greenhouse gases continue their current course. We found that penguin behaviors that might help them adapt to changing environmental conditions couldn’t reverse the anticipated global decline.

Major environmental shifts, such as the late formation and early loss of the sea ice on which colonies are located, are already raising the risk.

A dramatic example is the recent collapse of Halley Bay, the second-largest emperor penguin colony in Antarctica. More than 10,000 chicks died in 2016 when sea ice broke up early. The colony has not yet recovered.

By including those extreme events, we projected that 98% of colonies will be extinct by 2100 if greenhouse gas emissions continue their present course, and the global population will decline by 99% compared with its historical size.

Meeting the Paris goal could save the penguins

The results of the new study showed that if the world meets the Paris climate agreement targets, keeping warming to under 1.5 degrees Celsius (2.7 F) compared to pre-industrial temperatures, that could protect sufficient habitat to halt the emperor penguins’ decline.

But the world isn’t on track to meet the Paris Agreement. According to one estimate, by Climate Action Tracker, countries’ current policy pathways have a greater than 97% probability of exceeding 2 C (3.6 F). With recent government announcements factored in, the increase is estimated to be around 2.4 C (4.3 F).

So it appears that the emperor penguin is the proverbial “canary in the coal mine.” The future of emperor penguins, and much of life on Earth, including humanity, ultimately depends upon the decisions made today.

Marine ecologist Philip Trathan of the British Antarctic Survey contributed to this article.