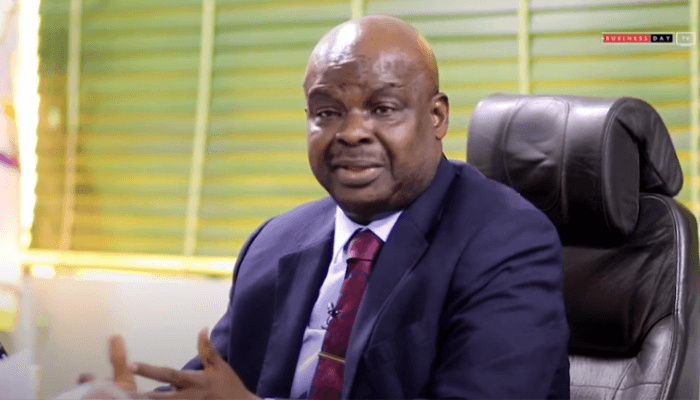 Ade Popoola sits in his office on a Tuesday morning to begin the day’s work at Reals Pharmaceutical’s Plaza. A video footage plays silently on his iPad. He swipes endlessly through another iPhone with one hand.

He does this while sitting behind a large L-shaped desk with curved edges. Popoola seems to have a thing for the colours brown and black. Every piece of furniture is of these colours, including the four seats for visitors.

What looks like a refrigerator and shelf all at once, stands at the other end of his office close to another door. A mini flat can be carved out of this workspace and one is hit by a sense of comfort and luxury.

Reals Pharmaceutical’s Plaza is located by the NECA building in Ikeja, a few blocks from Fela’s popular New Afrika Shrine. Since the company moved to this location in 2008, Popoola has resumed here every morning to see to the affairs of his company’s contributions to the health of Nigerians. But first, some things that typify his day must happen.

He does his morning prayers, followed by some physical exercise before he bathes and have breakfast before heading out. Everything starts at 6:30 am.

“It depends on which day of the week,” he said. “If I have an early schedule, I might skip both the breakfast and morning exercise. Some days, my schedule might be from 7 am.”

It grew to become the sole Nigeria representative and distributor of a number of other first class pharmaceutical industries in the world, and one of the first pharmaceutical companies to successfully commence the local scientific and marketing office in Nigeria.

Popoola started operations with five other medical experts, but details of its development cannot be discussed without the influence of Abacha — Nigeria’s military leader notorious for looting the country to shreds.

The firm was incorporated as a limited liability company in August 1995. This was when Abacha killed Ken Saro-Wiwa, and coincidentally, Popoola was to sign a contract to start this business in Nigeria the same year.

Read also: Healthy living in Lagos: For the professional always on the move

But Saro-Wiwa’s death scared off the multinationals intending to invest in the venture.

“When the announcement was made that he has been killed, they cancelled that contract,” he said. “That actually changed the way the company is structured till today.”

Popoola was to receive about 51 percent investment in the business, but the British government told all companies investing in foreign businesses to stay off all foreign investments. Though the pull-out was a disappointment, he said it changed the story positively long term because the company is now owned 100 percent.

“It could have been 51 to 49 percent ownership. Although, it could have scaled up at that time,” he adds.

Abacha’s government could have been a nightmare to Nigerians at the time, but the ease of doing business was better, compared to President Muhammadu Buhari’s government. It was easier to open letters of credit and to get supplier’s credit.

“Today, you can’t assure anybody that by next week he’ll get his foreign exchange because it’s just not there,” he insists.

According to him, this means the business partner will have one level of doubt about the capability of a Nigerian business’ ability to fund the transaction.

Vaccine readiness in Nigeria…we’re far from it

At the point vaccination readiness in Nigeria gets into the conversation, a different Popoola emerged. His visage changed. Perhaps, no well-meaning person can talk about Nigeria without being emotional about it, not when it is a pharmacist discussing Nigeria’s chances of producing coronavirus vaccines.

Nigeria wants to join the league of vaccine producers. It has even approved N3.06 billion for this purpose. If it starts soon, it will benefit from the support the US government is giving to Intellectual Property (IP) waiver on vaccine development.

But even these positive scenarios are not enough to convince stakeholders like Popoola about the possibility of vaccine production in Nigeria. He said the money approved is not yet released. If it has been released, it has not got to the hands of the people that should implement it.

He reasoned that one can only be optimistic about vaccine readiness when this publication reports that the money has been released and they signed the contract and everything takes off.

“That’s when you can say the vaccine is ready,” he said. “But vaccine readiness in Nigeria, we’re far from it. I’m ready to listen to who will tell me we’re not far from it and I’ll ask them to take me to where the equipment that have been purchased are.”

Hope with PPPs, but the government must back off

Still stressing the importance of the IP waiver, he said vaccine production could be possible if the private sector is allowed to take full ownership, and not a private-government partnership, because if anything is fully owned by a private individual, it moves faster than when government participates in it.

At the moment, according to him, what is being witnessed in vaccine production is government participation and this means there will be bureaucracy that will slow it down because their interest becomes too much for the private investor to thrive.

Popoola said PPP is good if the government will be a minority shareholder, giving an enabling environment for that business to thrive.

“If the government wants vaccine production,” he insists, “they should give the money to the private investor, close their eyes and know that what they’re doing is empowering vaccine production. Not to get involved and say we want to own part of the company that is producing vaccine.”

He adds that if the government is a minority shareholder, whatever business decision that is taken, the government nominee will not have the final say to stop it from moving forward.

However, in his view, with majority ownership, it becomes far-flung to get to produce vaccines. So, even the waiver might not be useful because to get it, there must be equipment and training, apart from the manufacturing site.

Popoola has 30 years of experience in the business of pharmaceuticals and has been serving Nigerians for the past 25 years through Reals Pharmaceutical as managing director.

He believes that anyone can succeed in business with the right mindset, but also noted that in business, every day brings different challenges, which one must prepare for, and if the response is always positive, they will overcome.

Popoola describes his leadership style as participatory and so far has a number of recognitions in the business world. But this man is largely influenced by the quotes by a man who once lived in the wilderness and ate locusts for lunch.

“John 3:27, and John said a man can receive nothing except it is given to him from heaven. I believe that a lot. Whatever I have today is by the grace of God,” he said.

How long will YOU live? This calculator predicts when you’re expected to die