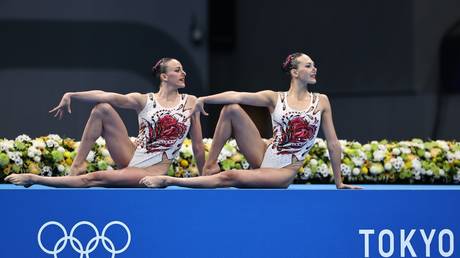 Tokyo 2020 organizers have apologized for a gaffe which saw a Ukrainian artistic swimming duo announced as being from the Russian Olympic Committee (ROC) team during a medal ceremony on Wednesday.

In an awkward mix-up as the three pairs lined up at the ceremony, Fiedina and Savchuk were announced as representing the ROC.

“The French language calling out (of medalists) should have said Team Ukraine, however it said ROC instead.

“Of course, people noticed that and the person in charge of announcements apologized,” Tanaka added through a translator.

“I also used this opportunity to express my apology to those who are in the Ukrainian team.”

Wednesday’s mistake could be taken as extra sensitive given the current tensions between Russia and Ukraine at a broader political level.

In the pool, ROC duo Romashina and Kolesnichenko were imperious, continuing Russian athletes’ dominance of the sport formerly known as synchronized swimming.

For Romashina, Wednesday’s gold medal was her sixth in total, making her the most successful Olympic competitor that artistic swimming has ever seen.

They will aim to make that six from six when the team event gets underway later this week.

The triumph for Romashina and Kolesnichenko was not without its own mishaps. During Tuesday’s preliminary round, the ROC pair had to restart their routine when the music didn’t start as planned.

During the final, the DJ at the Tokyo Aquatic Center also made a hash of their song, with Romashina explaining that “the music started not from the first chord, but from the third. We missed two counts but went on.”

The 31-year-old star said they didn’t “bear a grudge” over the musical mishaps, but added “it's a little strange that this is the second time this happens… It happens once, and the second time is somehow so suspicious.”

Romashina said the DJ had assured them that it would be third time lucky for the team event later this week – when hopefully the medal announcers also won’t make a hash of things.

Aussie PM offers lockdown-frustrated people ‘gift’ of getting their lives back, but with QR codes & other measures in place