LEV YASHIN has been named the greatest goalkeeper of all-time in a rundown by France Football.

English shot-stoppers and Manchester United heroes feature highly in the top-ten list that sees the Black Spider come out on top. 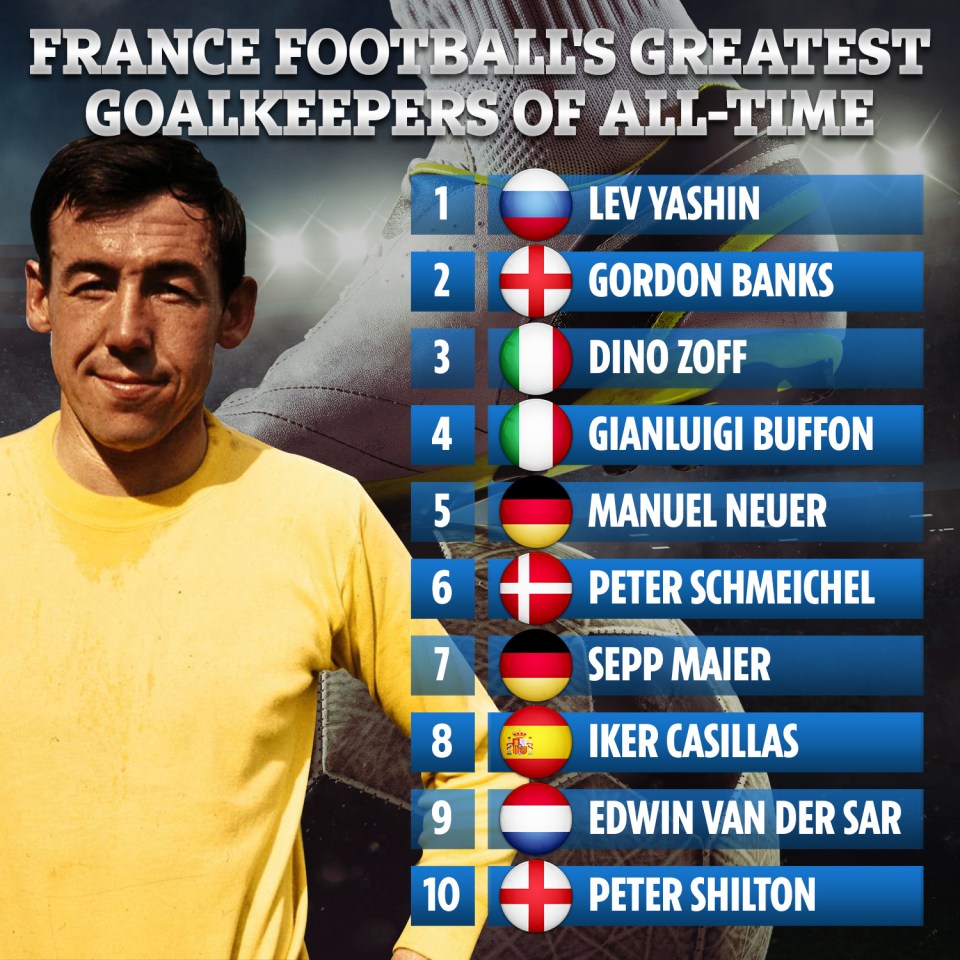 With a career that spanned 20 years, Yashin only ever played for Dynamo Moscow and the USSR, winning the 1960 European Championship and awarded the Ballon d’Or title three years later – the only goalkeeper to ever claim the honour.

Yashin never won the World Cup having fallen in the semi-finals of the 1966 tournament that France Football‘s No2 won.

Gordon Banks was named Fifa Goalkeeper of the Year six times in a row as Yashin exited the stage, starting with the year of that Wembley triumph.

In terms of individual moments, the Englishman’s most memorable save came in the 1970 World Cup versus Brazil with a stunning parry to deny a nailed-on Pele header – described by many as the greatest stop of all-time.

Coming in at No3 is Dino Zoff, the Italian keeper who clocked 112 caps for his country.

A World Cup winner with six Serie A titles added from a stint with Juventus, Zoff also had a solid coaching career with Lazio before guiding Italy to the Euro 2000 final.

Two modern stars make up the top-five with Gianluigi Buffon ranked fourth, ahead of Manuel Neuer.

Few could argue with Buffon’s presence as the Azzurri’s most-capped player by an absolute mile on 176 appearances having enjoyed a 25-year career that is set to continue into next season at least.

Neuer however has experienced something of a decline since a troublesome foot injury that preceded a disastrous 2018 World Cup.

However the Bayern Munich captain has been a major part of his club’s NINE consecutive Bundesliga crowns, plus a World Cup and Champions League triumph, while possessing his own unique style of bombastically escaping his area to clear loose balls.

At No6 is Peter Schmeichel, a goalkeeper boasting titles in Denmark, Portugal and England with Manchester United as well as his country’s Euro 92 victory.

Few can match the Dane’s claim to being one of the 1990s’ best goalkeepers, a decade in which he won three Uefa Goalkeeper of the Year gongs.

SEPP UP TO THE PLATE

Sepp Maier is named No7 by France Football and is the latest one-club man to feature on the list, having spent his entire career with Bayern Munich.

Part of the Germans’ domineering side of the 1970s, he claimed three consecutive European Cup wins among his four Bundesliga titles and the 1974 World Cup.

At No8, not only did Iker Casillas win football’s biggest prize he also lifted it as Spain captain in 2010.

A homegrown star in Real Madrid’s Galactico team, the keeper’s exit in 2015 was somewhat unceremonious but his record of 19 winners’ medals and 725 appearances is among the best of any position.

Edwin van der Sar is the ninth-best goalkeeper of all-time according to France Football, owing to a 21-year career that also included breaching the 100-cap mark for his country.

As the majority of the Dutchman’s trophies were won at the start and end of his career, with Ajax and Manchester United, he remained a standout performer up until his retirement in 2011.

Last but not least, Peter Shilton is given the No10 position as a reward for his astonishing longevity.

most read in football

Spurs, Liverpool and Leeds among Prem clubs in battle for Denmark star Damsgaard

The England keeper made a world record 1,390 competitive appearances from his 1966 debut with Leicester to finally retiring aged 47 in 1997.

His feats included playing for the Three Lions for over 20 years, accumulating a record 125 caps, and winning two European Cups with Nottingham Forest.

However he was beaten by the Hand of God goal from Diego Maradona at the 1986 World Cup.

Full-time and postgame discussion: Sounders move back into first place