There were 4,561 deaths related to drug poisoning in England and Wales, of which two-thirds were related to misuse – with some areas recording staggering levels of lives lost to drugs. 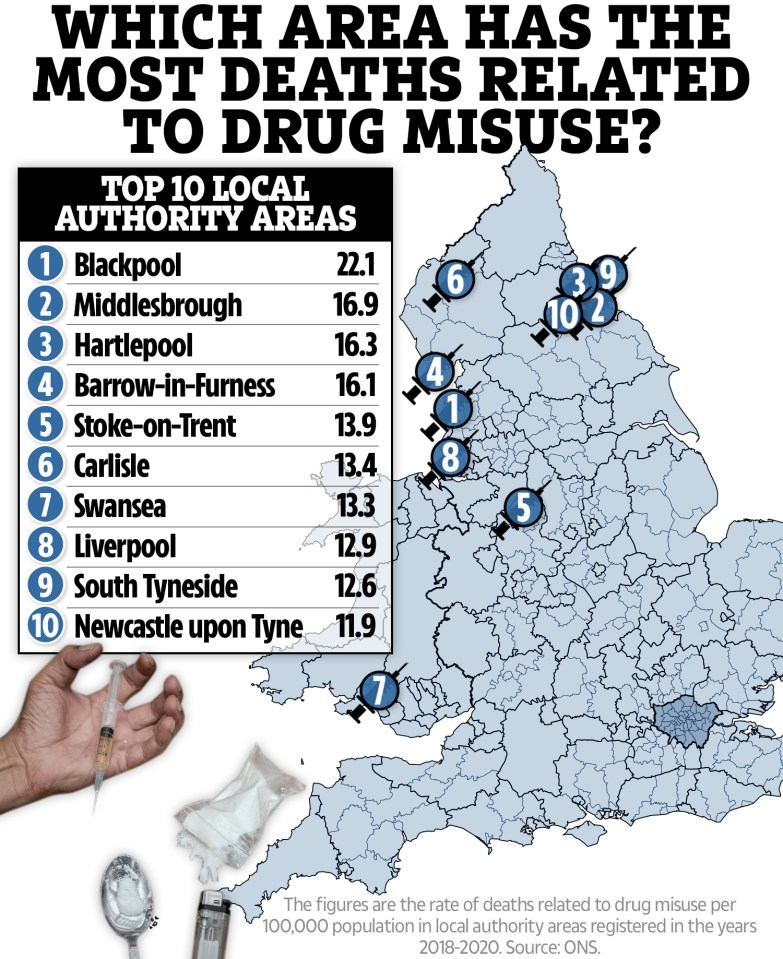 The local authority of Blackpool, Lancs., has the highest rate of deaths related to drug misuse of anywhere in England and Wales.

That’s almost a third more than the council with the second-highest rate, Middlesbrough, which logged 16.9 drug misuse deaths for every 100,000 people.

While most of the worst-affected areas are in the north of England, Stoke-on-Trent in the West Midlands and Swansea in South Wales were also in the top ten.

The figures relate to poisoning from illegal substances like heroin as well as legal drugs like prescription and over-the-counter medicines.

Blackpool is famed for its historic illuminations, tower, and the tallest rollercoaster in the UK.

But it’s now earning a reputation for consistently high levels of drug deaths – which are getting increasingly worse.

Now it tops the list again – this time with a rate that’s 17 per cent higher.

Blackpool’s high levels of deprivation, mental health issues, and cuts to treatment services have all been pointed to as contributing factors in the town’s drug death epidemic.

Early in 2020, three inquests within weeks of each other showed the terrible toll illicit drugs are taking on the area.

Savannah Neill, also 24, died after taking a lethal mix of heroin and Tramadol – she’d been prescribed the latter to deal with nerve pain.

Blackpool has followed the national trend

“She didn’t want to end her life, she didn’t get enough help and she self-medicated,” Savannah’s sister, Sam Clayton, told LancsLive.

And mum Emily Williams, 31, died after taking methadone and heroin.

Emily, Savannah, and Jack had all been treated for mental health problems before their deaths, each of which was ruled an accidental overdose.

Dr Rajpura added that Blackpool was one of the areas taking part in the Project Adder pilot, a collaboration between the council, police and local health services using health interventions to protect people from the harms of illegal drugs.

“We are hopeful that this project will make a real impact on people’s dependence on substances and support their journey to recovery,” Dr Rajpura added.

Last February in Middlesbrough, which had the second-worst death rate, the local Town Hall heard the inquests of five drug users’ deaths in a single day.

All of the men were under 40 and all of them had more than one drug in their systems.

David Ferguson was just 28 when he died in March last year from multiple drug toxicity including flualprazolam – a powerful sedative.

And Barrow-in-Furness has continued to log one of the highest drug misuse death rates in the country after being previously described as the “drugs capital of the north”.

The small Cumbrian town recorded 12 deaths in under six months in 2018 – a rate far worse than many cities.

Just as some areas have higher death rates than others, so too do different substances.

Of the 4,561 drug poisoning deaths registered in England and Wales in 2020, half involved an opiate.

The most common opiates involved in deaths were heroin and morphine, which were linked with 1,137 fatalities. 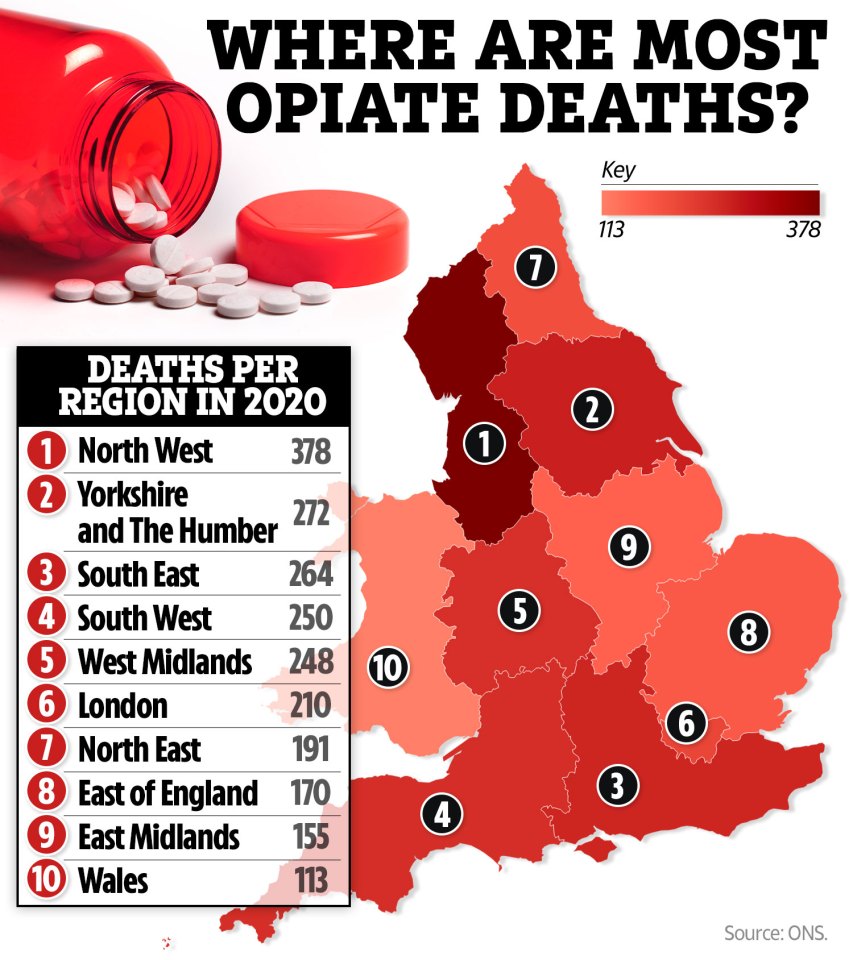 In January this year, a coroner ruled that artist Alison Lapper’s 19-year-old son, Parys, died from an overdose of heroin and diazepam in 2019.

The coroner added that there had been “missed opportunities” to help him tackle his drug problem, The Times reports.

And granddad Michael Warrington died from an accidental overdose involving heroin and other drugs last April while struggling to cope with lockdown in Hampshire, the Basingstoke Gazzette reports.

There are substantial threats from other drugs too.

Cocaine was involved in 777 deaths, which is almost 10 per cent more than in 2019 and a whopping five-fold increase on the number of cocaine deaths a decade ago. 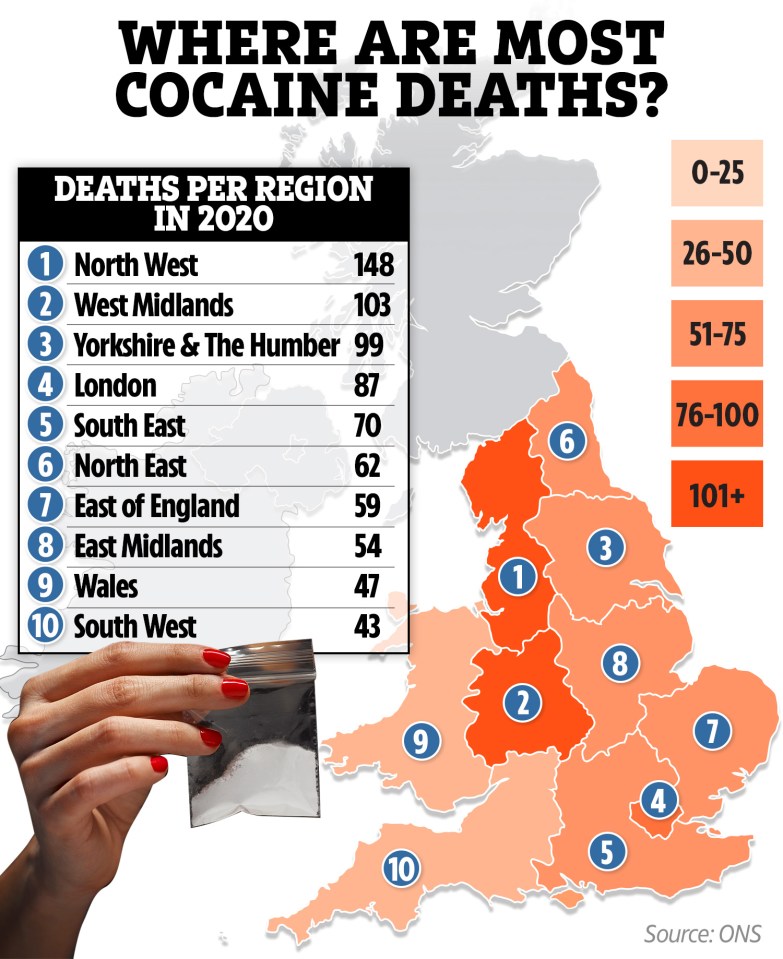 The North West also had the largest number of cocaine deaths (148) followed by the West Midlands (103) and Yorkshire and the Humber (99).

Mum-of-two Zoe Whelan, 30, died after an eight-hour vodka and cocaine binge at a party in Stockport, Greater Manchester, in late 2020.

“I miss her so much,” her dad Lewis Wells said at the inquest into her death in June. “It has broken my heart – I’ll never forget her.”

And a shock ruling last year found that a “playful” three-year-old girl died from a heart attack after taking her drug dealer dad’s cocaine.

Although the North West had the highest number of total drug deaths last year, the North East has a worse overall rate for the number of drug misuse deaths.

The region clocked 104.6 deaths per million people, while London had the lowest (33.1).

Certain age groups, too, were more affected by drug deaths than others – with Generation X topping the list.

People aged between 45-49 had the highest death rate, closely followed by those aged 40-44.

This same generation, who were born in the 1970s, have had the highest drug misuse death rate for the last 25 years.

There’s a significant gender split too – there were more than double the number of male drug poisoning deaths (3,108) compared to the number of females (1,453).

Drugs in the UK

As the death rate spirals out of control, criminal gangs continue to exploit the UK’s insatiable appetite for drugs.

In February, Border Force agents intercepted a shipment of 2.3 tonnes of cocaine hidden in consignment of bananas.

The haul, which had a street value of £184million, is believed to be one of the largest seizures in UK history.

But while that shipment was caught, many slip through and, ultimately, end up in Birtons’ bloodstreams.

The National Crime Agency estimates that we consume around 117 tonnes of cocaine alone every year.

And demand for new types of drugs could also pose unprecedented threats in coming years.

Benzodiazepines – sedatives used to treat insomnia and anxiety – were involved in 64 per cent of all drug-related deaths in Scotland in 2019, more than in any previous year.

And methamphetamine production is rapidly increasing in Afghanistan, the country which makes most of the heroin consumed in the UK.

Cops fear that gangs will use existing smuggling routes to bring the powerful stimulant to British shores.

Some critics say the government needs to do more to support treatment and addiction recovery services to help avoid more deaths in future.

Dame Carol Black, who led a two-part independent review of drugs, said cuts had left services “on their knees”.

She called for £552million to be invested over the next five years, having found that drugs cost England around £19billion a year.

How many die from drugs in YOUR area? England & Wales' death capitals revealed

Schoolboy, 15, dies of MDMA overdose while celebrating his 15th birthday

“The government faces an unavoidable choice: invest in tackling the problem or keep paying for the consequences.”

In response, the government set up a Joint Combating Drugs Unit last month.

“Tackling this issue requires strong collaboration across government and the new specialist Joint Combating Drugs Unit will help us to do just that,” the Health Secretary Sajid Javid said at the time.

Zoe Whelan, 30, died after taking cocaine and drinking at a party in December last year[/caption] A container filled with 1.5 tonnes of cocaine bound for the UK intercepted in the US[/caption] Savannah Neill died in Blackpool from an accidental overdose of Tramadol, heroin and cocaine[/caption]

Video: David de Gea furious at Harry Maguire as his error nearly leads to a goal for Villa vs Man Utd

Arinzé Kene on playing Bob Marley: ‘You can’t just sit back and enjoy my work. I want you to be challenged’