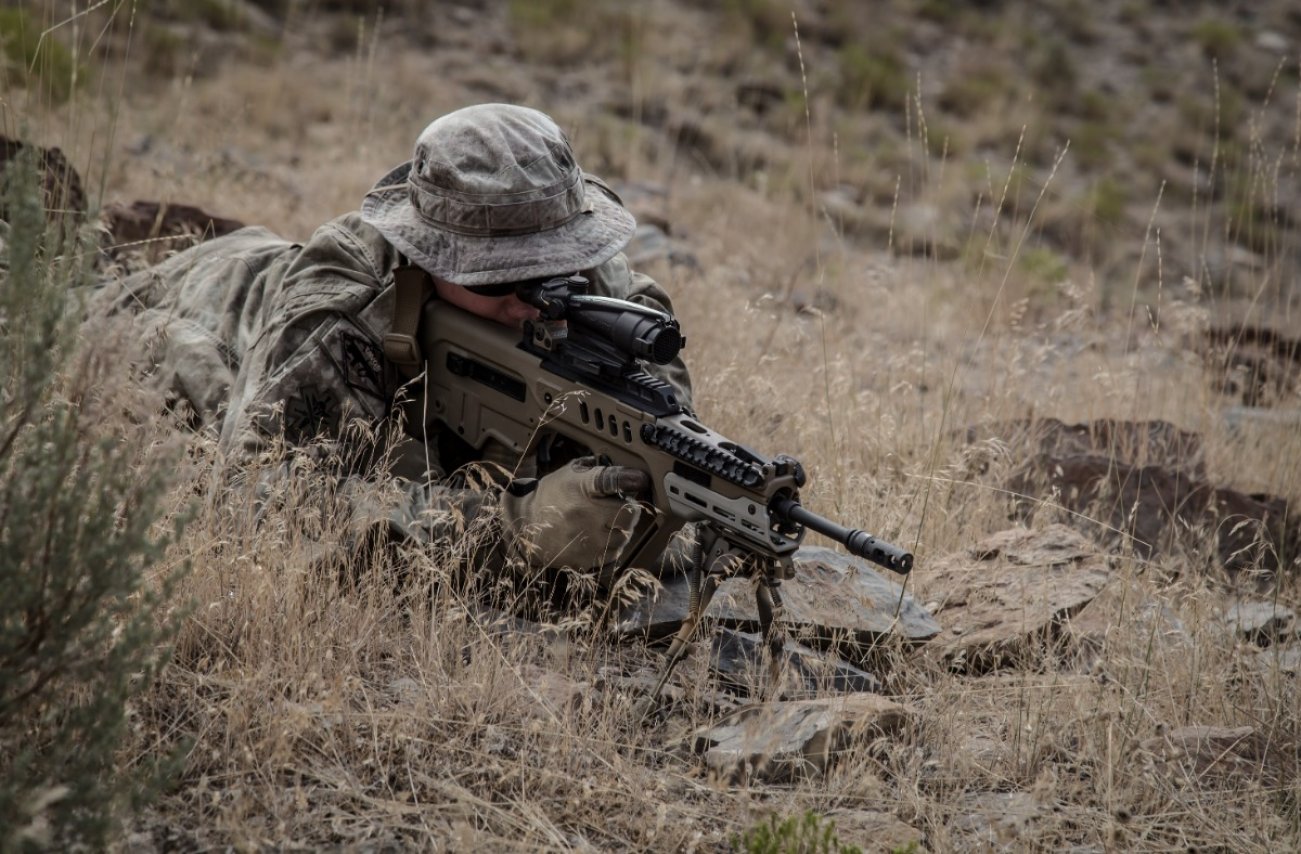 First introduced in 2001, the Tavor was selected by the Israel Defense Forces in 2009 to replace the American-made M-16 and M-4 as its first-line rifle.

Key Point: The Tavor primarily fires NATO 5.56 x 45 millimeter rounds, though it can also shoot 9-millimeter ammunition. The weapon is just 25 to 28 inches long, and weighs 7 to 8 pounds, depending on the model.

Israel builds its own high-tech military equipment, such as tanks, missiles and drones. Not bad for a nation of just 8.5 million people living in a state the size of New Jersey.

(This first appeared several months ago.)

But Israel has also proven adept at designing rifles. Perhaps its most famous firearm is the legendary Uzi submachine gun, an almost iconic 1950s design made famous by the photo of a U.S. Secret Service agent waving an Uzi during the attempted 1981 assassination of President Ronald Reagan. Originally conceived as a cheap, simple weapon for Israeli troops, the Uzi was widely used by police and military forces around the world.

The Uzi is still around but showing its age, supplanted by more modern submachine guns like the FN P90. Now Israel's modern firearm is the Tavor assault rifle, manufactured by Israel Weapon Industries, which is now making its latest Tavor 7 model available in the United States.

First introduced in 2001, the Tavor was selected by the Israel Defense Forces in 2009 to replace the American-made M-16 and M-4 as its first-line rifle.

Recommended: Uzi: The Israeli Machine Gun That Conquered the World

Recommended: The M4: The Gun U.S. Army Loves to Go to War With

Recommended: Why Glock Dominates the Handgun Market (And Better than Sig Sauer and Beretta)

If nothing else, the Tavor is distinctive by its bullpup configuration, in which the receiver and magazine are located behind the trigger, thus allowing a shorter weapon. Bullpup rifles have some reputation for being less accurate weapons than conventional long-barreled rifles, but the IDF wanted a weapon compact enough to be used by mechanized infantry crowded into their armored vehicles, as well as in close-range or urban combat.

The Tavor primarily fires NATO 5.56 x 45 millimeter rounds, though it can also shoot 9-millimeter ammunition. The weapon is just 25 to 28 inches long, and weighs 7 to 8 pounds, depending on the model. Though its shorter than the M-4, its barrel length is about the same, enabling it to fire high-velocity rounds. It uses a long-stroke piston system: though this is an old type of mechanism -- it was used by the M-1 Garand and AK-47 rifles -- it is also reliable. Given the problems experienced by some bullpup designs -- the teething troubles of Britain's notorious SA80 come to mind --  focusing on reliability may have been a wise decision.

The Tavor is used by various units -- especially special forces and police SWAT teams -- in almost 30 nations. As is common with Israeli arms, these include several South American, Central American, African and Asian nations, including Colombia, Mexico, Guatemala, Senegal and Nepal. In addition, the nation of Georgia has replaced some of its Kalashnikovs with Tavors. Vietnam and India also use them. As for the U.S., a few state and local police departments have opted for the Tavor.

‘This was a life and death branding assignment’: On advertising for the COVID-19 age