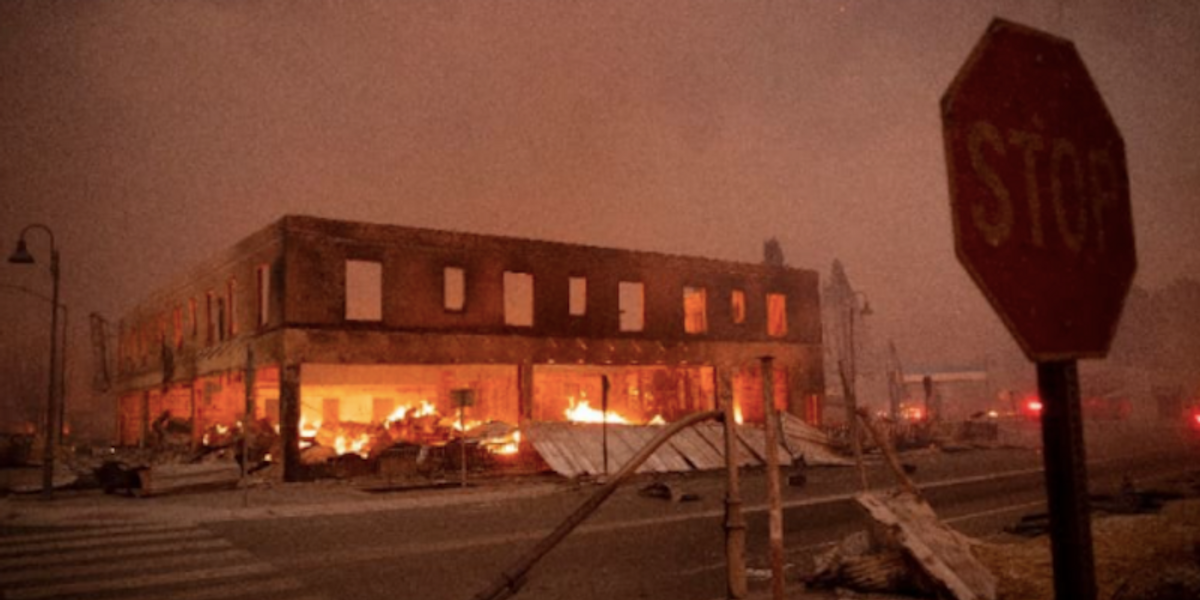 A huge fire has torn through a northern California town, hours after officials urged residents to flee the powerful blaze.

Downtown Greenville, a small community in the north of the state, was engulfed by flames after strong winds whipped the natural disaster towards the community.

"I'd say the majority of downtown Greenville is completely destroyed," tweeted wildfire photographer Stuart Palley, sharing images of the devastation.

"My heart is broken for this beautiful little town."

Authorities had earlier issued alerts to residents still in Greenville and Chester, as winds of up to 35 mph fanned the flames of the Dixie fire, the largest blaze in the state -- which has grown so big that it generates its own weather system.

"Firefighters are fighting for the town of Greenville," US Forest Service spokeswoman Pandora Valle told the San Fransisco Chronicle late Wednesday, but was unable to give further details.

Images taken by an AFP photographer showed the fire's heat had bent street lights to the ground, with only a few structures still standing. The fire entered the town of around 800 people at roughly 4 pm (2000 GMT) according to Jake Cagle, incident management team operations section chief.

In a video late Wednesday, he said that firefighters were struggling with those not obeying evacuation orders, leading to them having to divert time and resources to rescue people in the path of the flames.

"It's just intense fire behavior, and it's not what we're used to," he said.

The Dixie Fire has been burning for three weeks and spread to over 428 square miles (1,108 square kilometers), devasting huge swathes of Butte and Plumas counties.

Earlier, the Plumas County Sheriff's Department issued an evacuation order late Tuesday for the 2,000 or so residents of Chester to flee the area.

"If you remained you should evacuate to the EAST, IMMEDIATELY!" the sheriff's department posted on their official Facebook page Wednesday.

"If you cannot evacuate and you are threatened by fire and can safely get there, take refuge at the Chester High School baseball field!"

In a second warning on social media, the department added: "If you are still in the Greenville area, you are in imminent danger and you MUST leave now!!"

"If you remain, emergency responders may not be able to assist you."

The Dixie Fire has been raging in the forests of northern California since mid-July, part of a climate crisis that has brought sweltering heat and an alarming drought.

By late July, the number of acres burned in California was up more than 250 percent from 2020 -- itself the worst year in the state's modern history.