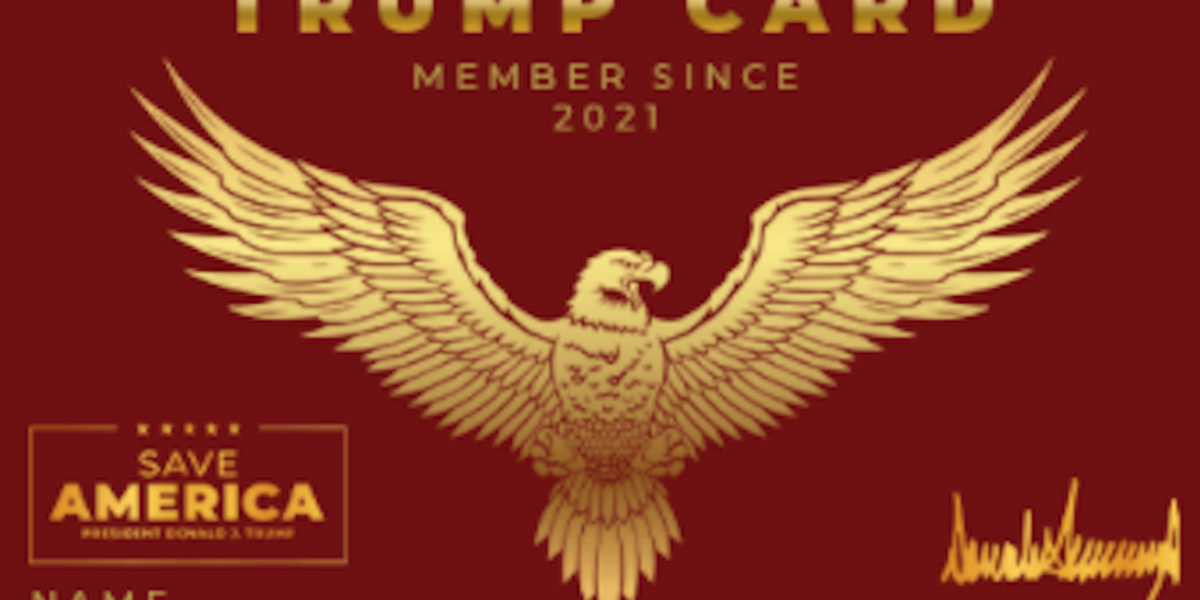 Social media users erupted in horror and mockery on Thursday morning after former president Donald Trump's PAC revealed in an email that it plans to issue official "Trump cards" that MAGA supporters can carry to show their loyalty to their "dear leader."

"We're about to launch our Official Trump Cards, which will be reserved for President Trump's STRONGEST supporters," the PAC wrote in the email, asking supporters to vote for their favorite of four proposed designs.

Those who voted by clicking on one of the four proposed designs were, naturally, redirected to a fundraising page.

"We recently met with the President in his Florida office and showed him four designs," the email continued. "Originally we were planning on releasing just one design, but when President Trump saw the cards on his desk, he said, 'These are BEAUTIFUL. We should let the American People decide - they ALWAYS know best!'" the email said.

All four of the designs say "Official Trump card" and bear the logo of his Save America PAC. They include the former president's signature above text saying, "Authorized by president Donald Trump," as well as a place for the name of the "member," along with an ID number and the date when their membership began.

On Twitter, several users pointed out that the eagle on one of the designs bares an eery resemblance to the Reichsadler or "imperial eagle," which was combined with a swastika in the official German national emblem adopted by by Adolf Hitler.

The Trump Cards look a bit to similar to something else... https://t.co/JAqrrw54Oq

Trump cards are the Nazi crest in distinctly Russian red and gold https://t.co/yoEXo7GWvE

The Mark of the Fleeced https://t.co/S0oO86eYjf

Next will be arm bands https://t.co/R5FhyuSwkB

So basically it's an antivax passport? Donald Trump wants his supporters to carry 'Trump Cards' https://t.co/8p6euBcS1w

All them Trump cards are gonna decline. ???? https://t.co/SYFaRun4BK

Honestly, I think these Official #WeLost Trump Cards aren't a bad idea. It could help with acceptance. #TRUMPCARD… https://t.co/Vskvoo0YsU

Definitely not a cult https://t.co/M8m8fMqoOv

White Sox 1, Cleveland 0: Cruising Along to the End

Where to find Man United vs. Aston Villa on TV and streaming