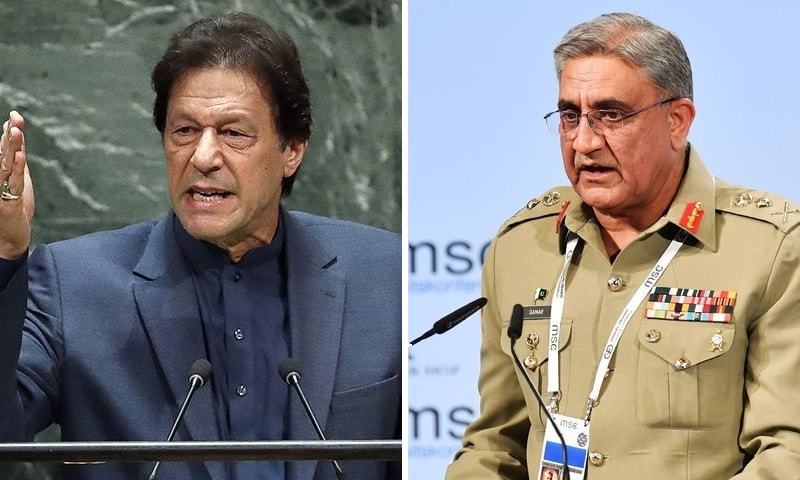 Prime Minister Imran Khan and Chief of the Army Staff (COAS) General Qamar Javed Bajwa on Thursday called out India over its continuous "inhuman military siege" and "unprecedented oppression" in occupied Kashmir. Their rebuke came as the country observed Youm-e-Istehsal Kashmir (the day of exploitation) to mark two years since New Delhi stripped the valley of its special autonomy.

The prime minister, in a series of tweets, said: "Today marks two years since India’s unilateral and illegal actions of 5 Aug 2019 in IIOJK. In these two years, the world has witnessed unprecedented oppression in IIOJK (Indian Illegally Occupied Jammu and Kashmir) by Indian Occupation forces. It is also witnessing Indian efforts to force demographic change and destroy Kashmiri identity."

He praised the people of occupied Kashmir for remaining "undaunted in their struggle for self determination" and vowed to continue to raise his voice for their rights "till Kashmiris are allowed to decide their future according to UNSC resolutions".

In another tweet, the ISPR added that the "resolution of Kashmir dispute as per UN Resolutions and aspirations of Kashmiri people is imperative for enduring peace and stability in the region."

Kashmir, we are with you: President Alvi at rally in Islamabad

“Today marks the day when the people of occupied Kashmir announced a strike” over New Delhi’s move to revoke the valley’s special autonomy," the president said, as he condemned pellet gun attacks and Indian atrocities on “our Kashmiri brethren”.

“I want to tell my Kashmiri brothers that we are with you,” he said, adding that PM Imran had fought the case of occupied Kashmir in a way that "compelled the world to acknowledge".

He condemned India for trying to bring demographic changes in the valley, and warned that a “new, stronger” Pakistan was emerging that would make sure that Kashmiris were given their rights.

Meanwhile, Sindh Chief Minister Syed Murad Ali Shah led a rally in support of the people of occupied Kashmir in Karachi. The participants of the rally had black bands tied around their arms as a symbol of protest against Indian atrocities.

The participants of both the rallies in Islamabad and Karachi observed a minute of silence to express solidarity with Kashmiris.

Repealing of Article 370 was meant to rob Kashmiris: Shehbaz Sharif

PML-N President and Leader of the Opposition in the National Assembly, Shehbaz Sharif said in a tweet that “August 5 marks two years of India's immoral, illegal and unilateral annexation of occupied Kashmir that flew in the face of the UN Charter & all bilateral treaties."

He termed the repealing of Article 370 Modi's "'final solution' meant to rob Kashmiris of their identity, human rights and the state".

Shehbaz further stated that “Kashmiris' struggle for their UN-sanctioned rights against a fascist Modi regime that has worn the mask of democracy renews our faith in the power of resilience and defiance.”

“Today, we pay rich tributes to Kashmiris for their courage and heroism,” he added.

On August 5, 2019, India's ruling Bharatiya Janata Party (BJP) had revoke occupied Kashmir's special status by repealing Article 370 of the constitution. The move allowed people from the rest of India to have the right to acquire property in occupied Kashmir and settle there permanently.

Kashmiris, international organisations and critics of India’s Hindu nationalist-led government see the move as an attempt to dilute the demographics of Muslim-majority Kashmir with Hindu settlers.

Over the past two years, Pakistan has been raising voice against the move and Indian atrocities in the valley.

On Wednesday (yesterday), Foreign Minister Shah Mahmood Qureshi wrote letters to the UN Security Council (UNSC) and the UN Secretary General, drawing their attention to “unlawful steps” being taken by India after the annexation of the disputed region of Kashmir to strengthen its “colonial hold” on the territory.

These actions included changes to the demographic structure and electoral boundaries in the occupied territory for “further marginalisation of Kashmiri Muslims” and “suppressing their demand for freedom”, he had pointed out in the letters.

“All such measures by India in IIOJK are violations of international law, including the UNSC resolutions and 4th Geneva Convention, and, are ipso facto, legally and materially, null and void,” the minister had maintained.

Prior to that, the Foreign Office (FO) had expressed hope last week that India would act fairly during its month-long tenure as the president of the UNSC, linking it to New Delhi's "obligation" to implement UNSC resolutions in occupied Kashmir.

FO spokesperson Zahid Hafeez Chaudhri had said on the occasion: “As India assumes this role, we would also like to once again remind it of its legal obligation to implement the UN Security Council resolutions on Jammu and Kashmir."

Concerns had been raised over the timing of India’s presidency amid speculations that it could likely prevent Pakistan from seeking any discussion on the situation in occupied Kashmir in the UNSC on the second anniversary of the repealing of Article 370.

However, on the eve of the anniversary, the UN reminded India that it continued to see Kashmir as a disputed territory.

The clarification followed a statement by India’s UN Ambassador T. S. Tirmurti that the disputed state was now an “integral” part of India.

At a Wednesday afternoon news briefing in New York, UN Secretary General Spokesman Stephane Dujarric was asked what the UN position on this 70-plus years old dispute was.

“Our position on Kashmir is well established and has not changed. I will leave it at that,” Dujarric had said.

When the journalist asked him to repeat the official UN position on this issue, he said: “You will find it in relevant resolutions. I’m not going to go and repeat it, but ours is unchanged.”