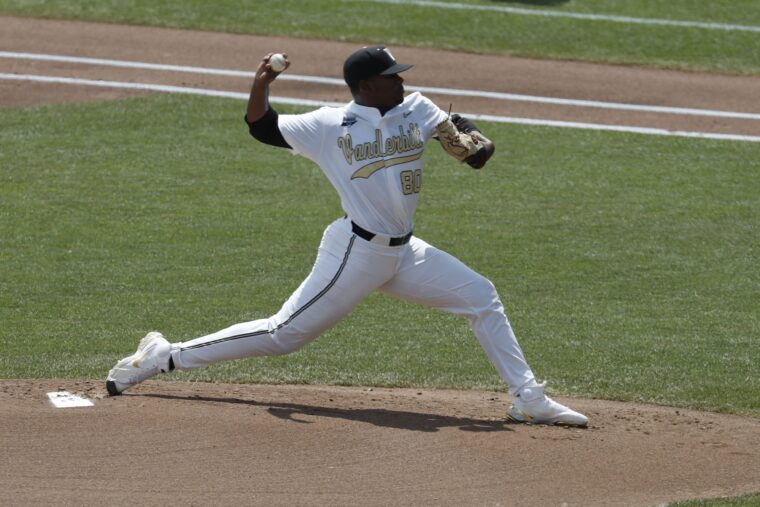 With the tenth overall pick, the Mets took Kumar Rocker, RHP out of Vanderbilt University. Most did not expect Rocker to be sitting on the board for the Mets. Despite his struggles in the College World Series, Rocker’s track record+upside seemed like he would be a lock to be a Top-7 selection. The Mets will likely need to center the rest of their draft around Rocker but wow, is this one exciting selection.

Here is a video of Rocker’s electric arm on display:

The Mets get an absolutely electric arm in Kumar Rocker with the #10 pick.

Here is a snippet from Baseball America’s writeup on Rocker:

He has power stuff out of that powerful frame, headlined by a fastball up to 99 mph at his best and a devastating slider in the low-to-mid 80s that grades out as a double-plus offering at its best and is one of the better breaking balls in the 2021 class.

Here is a snippet from MLB.com’s writeup on Rocker:

He usually operates at 93-96 mph with his heater, which can reach 99 and features some run and sink but also can get flat at times, though his velocity sat in the low 90s for three weeks early in the season. He notched all 19 of his whiffs in his no-hitter with his slider, a mid-80s beast with power and depth that grades as plus-plus, and he also has a low-80s curveball with more vertical break.

Here is a video of Rocker breaking down his mechanics with his potential future teammate, Marcus Stroman:

Kumar Rocker on being a "One of One"…and not Cookie Cutting Mechanics.

What @KumarRocker got from my @STR0 interview.

Watch the interview on YT.
You can see why Rocker is the likely 1st pick in the MLB draft.

Finally, here is a breakdown of the selection by Vinnie Cervino of Perfect Game USA:

Kumar Rocker is an elite talent with a longer track record than anyone in the draft. FB wavered at times but he’s a bulldog with the best breaker in the draft. #Mets fans should be happy. #LGM #LGFM pic.twitter.com/UWeBy7U7qo

Kumor was ranked as the No. 4 player in the draft by MLB Pipeline.

Lateral flow tests: How to use, order and report results

Axie Infinity: online games where people earn as they play are transforming gaming