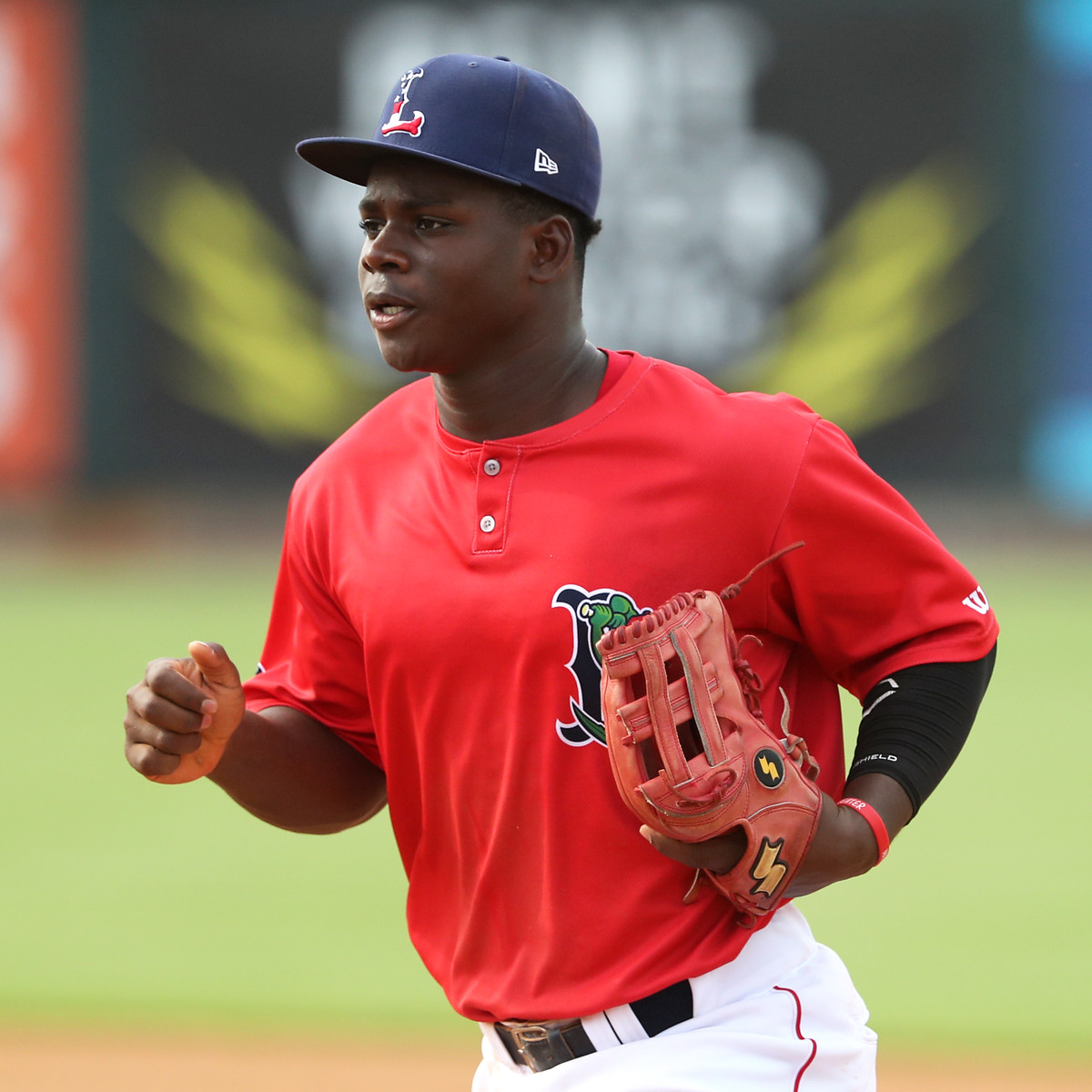 7/12 Cup of Coffee: Between the regularly scheduled minor league games, the All-Star Futures Game, and the MLB Draft, Sunday was like Christmas to minor league baseball fans. Jarren Duran was the lone bright spot in Worcester, Ryan Fitzgerald and Triston Casas led a comeback for Portland, and Gilberto Jimenez (pictured) stole home for Salem. On the pitching front, Josh Winckowski was not especially sharp, but Jeremy Wu-Yelland fired four hitless innings.
In the 2021 All-Star Futures Game Brayan Bello allowed a run in 2/3 of an inning, and Jeter Downs hit a two-run double. Bello gave up a double to Nolan Gorman, and after a wild pitch, Gorman scored on a sacrifice fly. Bello hit 98 mph with his fastball and also showed off his slider and changeup. Downs struck out in his first at-bat but hit a 108-mph double in his second. The National League team came out on top with an 8-3 victory.
-----
Lehigh Valley IronPigs (PHI) 5, Worcester Red Sox 1
The normally potent Worcester offense managed just three hits in Sunday's loss. Jarren Duran did his best to carry the team by going 1 for 2 with a double, walk, and two steals while scoring the only run. Franchy Cordero hit an RBI double to account for the only RBI. Stephen Gonsalves really struggled with his control, walking five and throwing just 39 of his 79 pitches for strikes. In all, he gave up four runs in 3 1/3 innings. The bullpen had more luck as Marcus Walden struck out the side and Jose Adames struck out two in his second WooSox appearance.
-----
Portland Sea Dogs 7, Hartford Yard Goats (COL) 5
A two-run single from Triston Casas proved to be the difference as Portland finished off the six-game sweep. Down 5-3 in the seventh inning, Ryan Fitzgerald tied the game with a two-run home run, and Casas put the Sea Dogs ahead. Fitzgerald went 2 for 2 with two walks and three runs scored, and Tanner Nishioka went 2 for 2 with a sacrifice fly.
Josh Winckowski did not have it on Sunday as he failed to get out of the first inning. He allowed three hits and a walk while throwing 31 pitches and recording only two outs. Portland was bailed out by Denyi Reyes, who struck out eight over four innings of relief. Seth Blair got his second save with a scoreless ninth.
-----
Greenville Drive 8, Aberdeen IronBirds (BAL) 2
Every Drive player had at least one hit, and Chase Shugart turned in a solid outing in an impressive Greenville win. Shugart went five innings and struck out four, and the IronBirds only managed two solo home runs off the hurler. Dylan Spacke, Oddanier Mosqueda, and Zach Bryant combined to shut Aberdeen down over the final four innings. Of Greenville's 13 hits, the biggest was a two-run home run from Christian Koss, his third of the year. Cameron Cannon had his fourth three-hit game of the year, and Wil Dalton went 2 for 3 with a double and a walk.
-----
Salem Red Sox 10, Delmarva Shorebirds (BAL) 0
Four no-hit innings from Jeremy Wu-Yelland and three dominant innings from Ryan Fernandez led the way in Salem's shutout victory. Wu-Yelland struck out two and Fernandez struck out five as they continue to pitch well. Fernandez has an ERA of just 0.44 in 20 1/3 innings with 24 strikeouts.
Salem allowed just one hit on the day but slugged 18. Gilberto Jimenez set the table by going 3 for 6 with two doubles. In the fourth inning he successfully completed a double-steal with Matthew Lugo that saw Jimenez steal home. Lugo also went 3 for 6, and Nicholas Northcut went 3 for 4 with a walk. Other than Jimenez's two doubles, the only other extra-base hit was a three-run home run from Luke Bandy.
-----
Player of the Day: Going 3 for 6 with two doubles and two RBI is impressive, but it was his steal of home that earned Gilberto Jimenez the honors. After a sluggish May, the system's fourth-ranked prospect has come to life in July. The 21-year-old is now hitting .325/.364/.500 this month with four steals in four attempts.
Photo Credit: Gilberto Jimenez by Kelly O'Connor

PATCHING: I JUST SMASHED IT!