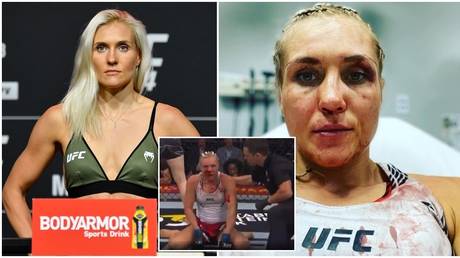 Russian MMA star Yana 'Foxy' Kunitskaya has apologized to fans for her latest loss, also showing off a bruised face from her hospital bed following an action-packed UFC 264 in Las Vegas on Saturday.

The 31-year-old faced Irene Aldana in the second fight of the main card, but didn't get beyond the first against her feisty Mexican rival.

At 4:35 into the bantamweight bout, Kunitskaya was dropped with a short left hook after first trying to put pressure on her foe and smother her against the cage.

Irene Aldana gets it DONE! ???? She finishes Kunitskaya in less than a round #UFC264 pic.twitter.com/ybXYyC8jeN

Aldana then jumped on her downed opponent and, while kept at bay for a few seconds, finished her off with some brutal ground and pound.

The Russian did however receive 30% of Aldana's purse, after the latter missed weight on Friday.

But Kunitskaya was obviously upset with the loss and took to Instagram to address it.

Uploading a selfie of herself covered in blood, cuts and bruises she wrote, "Sorry. Life goes on" alongside a prayer emoji.

Notable figures and establishments across the MMA world such as Kamara Usman's manager Ali Abdelaziz offered their best wishes, as did partner Thiago Santos who vowed: "I will always be beside you, forever" along with a fox and loveheart emoji.

The former challenger to Jon Jones' light heavyweight crown also made his own separate post.

"Tonight wasn't our night," he wrote to caption a photo of the couple.

"To lose is part of our sport, part of life. We fought, we tried and we did our best. Congrats to Aldana, no excuses.

"I am so proud of you, because I am with you 24 hours a day and I know how hard have you been working for [this], I love you so much and forever. Thanks to all who supported us," the Brazilian signed off.