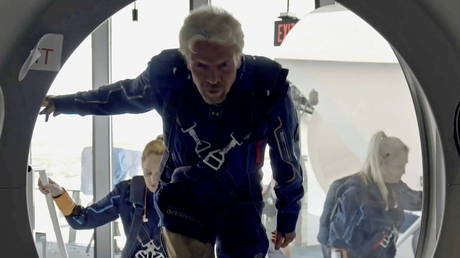 Richard Branson’s Virgin Galactic is launching its first fully crewed suborbital mission. The company is in a race with Jeff Bezos’ Blue Origin to secure a share of the lucrative emerging space tourism market.

Branson and five other people are riding the VSS Unity, an air-launched rocket plane, for a 90-minute flight voyage to the outer reaches of Earth’s atmosphere. The mothership, VMS Eve, is based at Virgin Galactic's Spaceport America in New Mexico, the same location where the VSS Unity is set to land.

The test flight comes just nine days before the first crewed flight of Blue Origin’s New Shepard capsule. The company launched barbs at its competition shortly before its test, implying that Virgin Galactic’s plane is not actually a spaceship and saying that New Shepard offers a better experience to customers.