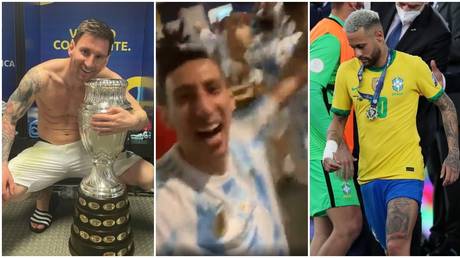 Argentina players were captured provoking rivals Brazil after they beat them in the Copa America final at the Maracana, while Lionel Messi made a sweary celebratory post on Instagram and Neymar was blasted by Brazilians.

Ending a 28-year trophy drought, and Messi's career-long one for his first major international silverware, La Albiceleste topped their neighbors 1-0 in Rio as the tearful Barcelona star was mobbed by his teammates at full time.

As expected, pandemonium ensued once Lionel Scaloni's men had lifted the trophy and gone back to the dressing room, as the winners knocked back drinks and sang popular terrace refrains.

"Brazil, tell me how it feels to be bossed around in your own home?" they menaced, repeating a chant that filled cities across South America's largest country at the 2014 World Cup, as the Selecao fell 7-1 to Germany in the semis and Argentina roared to the final to face Die Mannschaft.

There they lost at this same stadium thanks to a Mario Gotze extra-time effort, but the demons were exorcised when Angel Di Maria scored an excellent lob in the 22nd minute that proved to be the only goal of the game in Saturday's Copa America final.

Finally with the weight off his back after four final losses (three in the Copa America and one in the World Cup), Messi took to Instagram to celebrate the feat with a profane post.

To caption a photo of himself with the trophy, he wrote: "What a beautiful madness!!! This is amazing, thank you God!!!

"WE ARE CHAMPIONS, YOUR MOTHER's SHELL [vagina]! Come on, f*ck!"

Elsewhere he was classier, when uploading a selfie of himself and coach Scaloni.

"More than deserved! You are a crack."

The post was commented on by Aston Villa 'keeper and hero of the semifinal shootout against Colombia Emi Martinez, who wrote: "My captain," along with a flame emoji and added "You made it all your own".

Javier Mascherano, who is now retired after falling short with Messi on all those other occasions contributed a string of praising open hand emojis.

Unfortunately he wasn't around to mark this conquest, but Messi still wanted to honor those who have been with him through the heartbreaks before youngsters such as Lautaro Martinez and Rodrigo de Paul injected life into a battered and sinking ship.

Speaking of the Catalan capital, the triumph was celebrated in shores further afield than Buenos Aires and Messi's hometown Rosario.

At the Arc de Triomf in Barcelona, flares were let off approaching five in the morning.

And in Bangladesh, where football fans typically support either Brazil or Argentina, they took to the streets to mark the milestone.

Despite Strict Lockdown For Covid People Around Every District, City, Mohalla Of #Bangladesh There Are Celebration Going Around On #Argentina Winning #CopaAmerica2021 Final.

Naturally the tone was far less cordial in Brazil among supporters of the five-time World Cup winners.

Pictured crying and inconsolable after the full-time whistle, as a jubilant Messi FaceTimed his family, the PSG star won plaudits outside the country for being a good sport in later congratulating the six-time Ballon d'Or winner.

But he was accused of crocodile tears by his compatriots, when later seen cozying up to his former MSN front line partner at the Camp Nou backstage.

Neymar with Lionel Messi after he won the #CopaAmerica with Argentina ????

Nothing but respect between two of the greatest to play our beautiful game ❤️ pic.twitter.com/DvE4JYDJZe

"He's crying like he's got to pay his taxes," said another, of the "tax evader".

So this just happened in the #CopaAmericaFINAL

Brazilians also argued among themselves as some of their number supported Argentina whether fans of Messi, haters of Neymar, opponents of the president Jair Bolsonaro - or a mixture of all three.

"There are Brazilians that are HAPPY with Neymar crying and Messi's celebrations. It's all wrong, for f*ck's sake," remarked a TV presenter on Twitter.

"Sorry, but it's wrong to root for a team that should have refused to play the Copa America in our country, knowing the catastrophe we're going through here. And we know this only happened here because of politics," came one reply to this, in a nod to how Bolsonaro pushed for the tournament to be hosted in their land despite the Covid pandemic already claiming over 530,000 lives.

"This cup was not just football," began another response.

"It was a manifestation of the Brazilian's dissatisfaction with the way Brazil is being conducted (if you can call this going straight to the abyss, conduct).

"And those who didn't understand this are more lost than the deaf at bingo."