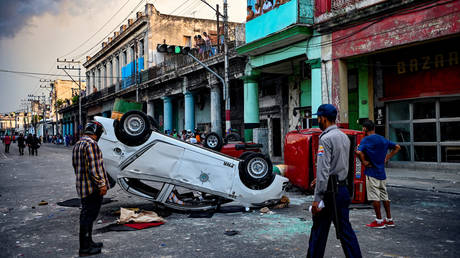 Large anti-government protests broke out in Cuba’s major cities in a rare display of “pro-freedom” sentiment that was immediately cheered on by US officials and denounced as “foreign provocations” by President Miguel Diaz-Canel.

Thousands of protesters marched on Sunday in Havana, Santiago de Cuba and other locales, decrying food, medicine and vaccine shortages, and demanding an end to the island nation's communist rule. Numerous videos posted on social media showed crowds marching and chanting such slogans as “We are not afraid,” “Liberty” and “Cuba is not yours!”

While many of the marches seemed mostly peaceful, protesters were reportedly flipping cars and throwing rocks at police in Havana and elsewhere.

Protestors flipping the car of a high ranking communist official in Cardenas, Matanzas, Cuba. These protests have popped up all over the island. They are not isolated. This is a movement #SOSCuba #vivaCubalibre pic.twitter.com/8nwQpkvEjn

#Cuba ????????: unimaginable scenes as protesters are throwing stones at the police.

Anger with the regime clearly runs deep after 62 years of repression. #SOSCuba #PatriaYVida

Cuba has been plagued by shortages of basic necessities for decades, under perpetual US embargo, with the situation further exacerbated by the Covid-19 pandemic and the Trump administration’s move to reclassify the country as a state sponsor of terrorism. But despite the pressure and isolation, Cuba became the first country in Latin America and the Caribbean to successfully develop not one but two Covid-19 vaccines and has managed to domestically produce and vaccinate over a quarter of the population with at least one dose – while suffering a severe shortage of syringes due to US sanctions.

With such outbursts of public discontent rarely seen in Cuba since the revolution, US politicians immediately seized on the unrest, praising the protesters and pledging support.

After decades of suffering through a communist dictatorship, the Cuban people deserve liberty.

I am proud to stand in solidarity with the people of Cuba who are calling out for freedom. pic.twitter.com/XNmm6GfHQx

“Florida supports the people of Cuba as they take to the streets against the tyrannical regime in Havana,” Florida Governor Ron DeSantis said on Twitter. “The Cuban dictatorship has repressed the people of Cuba for decades and is now trying to silence those who have the courage to speak out against its disastrous policies.”

Florida supports the people of Cuba as they take to the streets against the tyrannical regime in Havana. The Cuban dictatorship has repressed the people of Cuba for decades & is now trying to silence those who have the courage to speak out against its disastrous policies#SOSCuba pic.twitter.com/H71EYoKdUZ

US Representative Nicole Malliotakis (R-New York) said it was encouraging to see the Cuban people demanding an end to their misery. “I hope and pray for a free Cuba for my relatives and all  suffering under its unbearable Communist rule.”

We stand in solidarity with our brothers and sisters in Cuba who are demanding the very basics.

The Biden administration also expressed support for the protesters, although a State Department official portrayed the demonstrations as being entirely about the pandemic. “Peaceful protests are growing in Cuba as the Cuban people exercise their right to peaceful assembly to express concern about rising Covid cases, deaths and medicine shortages,” said Julie Chung, acting assistant secretary for the department’s Bureau of Western Hemisphere Affairs.

Peaceful protests are growing in #Cuba as the Cuban people exercise their right to peaceful assembly to express concern about rising COVID cases/deaths & medicine shortages. We commend the numerous efforts of the Cuban people mobilizing donations to help neighbors in need.

Such swift reactions from abroad add credibility to President Diaz-Canel's claims that foreign forces might have spurred and amplified the demonstrations, while sincere protesters were being manipulated by US social media campaigns.

“We are calling on all the revolutionaries in the country, all the Communists, to hit the streets wherever there is an effort to produce these provocations,” he said in a broadcast to the nation.

As crowds of pro-government counter-protesters took to the streets, he added on Twitter, “The revolution is defended by the revolutionaries. And among the revolutionaries, the Communists are going to the front – never as an elite, but as a conscious and committed force.”

Amid reports of clashes and arrests, after Cuban authorities mobilized security forces to contain the unrest, US Senator Marco Rubio (R-Florida) pleaded with President Joe Biden and Secretary of State Antony Blinken to urgently “call on Cuban military forces to not fire on their own people.”

The protests sprung up just days after Cuba approved for emergency use its homemade Abdala coronavirus vaccine, which it eventually hopes to export to other countries such as Argentina, Mexico, Vietnam and even Iran. The unrest also comes on the heels of last week’s assassination of President Jovenel Moise in neighboring Haiti, who was allegedly by a hit squad made up of 26 Colombians and two Haitian-Americans.

The incompetent communist party of #Cuba cannot feed or protect the people from the virus.

Now those in the military must defend the people not the communist party.

Diaz-Canel succeeded Raul Castro as president in 2018 and as Communist Party chief earlier this year. Shortly after taking on the latter role in April, he reportedly told party leaders, “Our sworn enemies go about thinking up the most perverse plans to attack the revolution, create distrust and break up unity. The Cuban revolution won’t be betrayed or given over to those who toy with the fate of the homeland.”