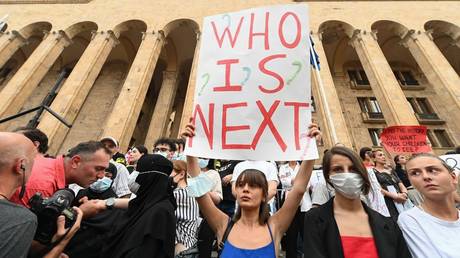 Thousands of people gathered in front of the Georgian parliament building in Tbilisi on Sunday after it was reported that a cameraman, beaten by a violent homophobic far-right mob last week, had been found dead in his apartment.

The body of Alexander Lashkarava, one of a dozen journalists attacked during mob violence against LGBT+ activists, was discovered by his mother on Sunday. According to his colleague Miranda Baghaturia, the Pirveli TV cameraman was beaten by a mob of 20 people last Monday and sustained multiple injuries, resulting in him having to undergo surgery. He was discharged from the hospital on Thursday. The exact cause of death has not yet been announced.

The news inspired thousands of people to gather on the streets of Tbilisi, where activists have accused the authorities of encouraging hate groups.

???? Protests sparked after the journalist of @TvPirveli passed today. He got killed by violent groups which were hunting for media and activists during #TbilisiPride21. pic.twitter.com/B6gcrt5O0E

Writing on Twitter, Georgian President Salome Zourabichvili called the death a “tragedy,” offering her condolences to “the entire media community.”

“It must be investigated, and those responsible must be punished,” she said.

Last week, the organizers of Tbilisi Pride were forced to cancel the event after far-right activists stormed and ransacked their office, and violently assaulted more than 50 journalists covering the event.

This came after Georgian Prime Minister Irakli Garibashvili attacked the Pride plans as “unreasonable,” claiming that the event, named ‘The March of Dignity’, had been organized by the “radical opposition” that seeks to “spark tension” and destabilize the country.

The team behind Tbilisi Pride blamed the government, the Orthodox Church and ‘Pro-Russian forces’ for being behind the attacks. There is no evidence to suggest Moscow was at all connected, and it would be somewhat strange for Georgian nationalists to be allied to Russia, given that Tbilisi accuses the country of occupying Abkhazia and South Ossetia.

“Such inactivity, and using the political power of hateful groups as a weapon, resulted in attacks on the offices of Tbilisi Pride and the Shame Movement, and violence against journalists in the presence of the police,” Tbilisi Pride said in a statement.

FRSC warns against speeding as six killed in Bauchi crash