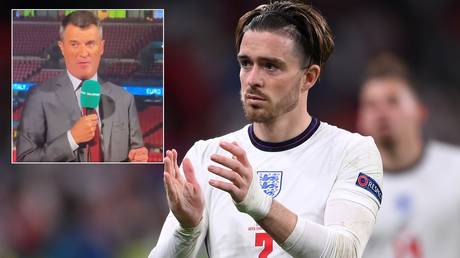 England playmaker Jack Grealish has hit back at critics who accused him of shirking responsibility by not taking a penalty in England’s shootout defeat to Italy in the Euro 2020 final at Wembley.

Appearing in a first major final for 55 years, England suffered familiar agony from the penalty spot as they lost the shootout 3-2 after the scores had finished level at 1-1 following extra time.

Late substitutes Marcus Rashford and Jadon Sancho both missed with their penalty efforts for England, with the former striking the post and the latter seeing his shot saved by inspired Italian stopper Gianluigi Donnarumma.

England goalkeeper Jordan Pickford was also on form, saving from Andre Belotti and Jorginho to keep his team in the shootout.

England’s fifth and ultimately decisive spot kick fell to 19-year-old Arsenal starlet Saka, who stepped up knowing he had to score to send the contest to sudden death.

But it was agony for Saka and England as the youngster sent a tame effort at a comfortable height which was saved by Donnarumma.

England saw their long-awaited chance at big tournament glory disappear into the London night as Italy celebrated and Saka was consoled by his teammates.

No sooner had the spot-kick drama ended than questions were already being asked about England’s penalty-takers, and more specifically why the pressure of the fifth kick had been handed to the unseasoned Saka.

Up in the ITV studio, Irish former Manchester United midfield general Roy Keane posited that the likes of Raheem Sterling or Jack Grealish – aged 26 and 25 respectively – should have stepped up instead of Saka.

"If you're Sterling or Grealish, you cannot sit there and have a young kid [Saka] go up for a penalty ahead of you, you can't," Keane said scathingly.

"You cannot let a shy 19-year-old go up in front of you. They have a lot more experience, Sterling has won trophies, they had to get in front of the young kid and stand up."

But Aston Villa ace Grealish, who represented Ireland at youth level before switching allegiances, has disputed the narrative that he bottled it, taking to Twitter to blast back at the likes of Keane.

“I said I wanted to take one!” wrote Grealish, who had been brought on as a substitute in extra time.

“The gaffer [Gareth Southgate] has made so many right decisions through this tournament and he did tonight! But I won’t have people say that I didn’t want to take a peno when I said I will…”

I said I wanted to take one!!!!
The gaffer has made so many right decisions through this tournament and he did tonight! But I won’t have people say that I didn’t want to take a peno when I said I will… https://t.co/3mBpKyMoUV

The tweet racked up well over 150,000 ‘likes’ within a couple of hours of being posted, suggesting that there was considerable sympathy for Grealish.

Keane, however, was not the only one to question England's penalty line-up, with many blaming Three Lions boss Southgate.

“Southgate bringing on Rashford and Sancho for two minutes to take a penalty is a shambles,” wrote another.

“Also who gave the green light for 19-year-old Saka to take the 5th penalty? Southgate got everything wrong in the final for me.”

Southgate himself assumed responsibility, saying the penalty line-up was his call.

“I chose the guys to take the kicks. I told the players that nobody is on their own in that situation. We win and lose together as a team," said Southgate, who himself famously missed in a shootout at Euro 96 as England lost against Germany in the semi-final.

“It is my decision to give him [Saka] that penalty. That is totally my responsibility. It is not him or Marcus or Jadon. We worked through them in training. That is the order we came to...

"We worked in training. It’s not down to the players. Tonight it hasn’t gone for us. We know they were the best takers we had left on the pitch. Of course it’s going to be heartbreaking for the boys but they are not to blame for that.”

England’s unfortunate trio of Rashford, Sancho and Saka were all subjected to online racist abuse after their misses, prompting the FA, UEFA and even UK Prime Minister Boris Johnson to step in to condemn the insults.