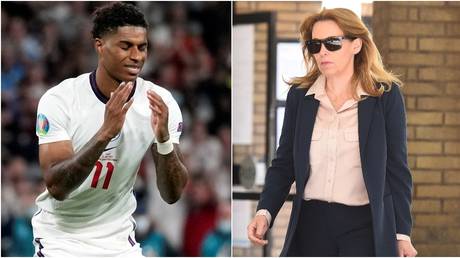 A UK Conservative MP has been forced to backtrack after a leaked WhatsApp message in which she criticized England footballer Marcus Rashford for missing in the penalty shootout defeat to Italy in the Euro 2020 final.

Dover MP and back bencher Natalie Elphicke suggested that Manchester United star Rashford, who has frequently taken her government to task, should have practiced spot kicks as opposed to providing free meals for impoverished children during the pandemic.

Along with his new fellow Red Devil Jadon Sancho, as well as Arsenal's Bukayo Saka, Rashford fluffed his lines from 12 yards out and handed the Italians their second-ever Euros title via a 3-2 win on penalties.

Of black and mixed-race descent, the trio have been racially abused by their own countrymen while Elphicke's boss, Prime Minister Boris Johnson, has been accused of hypocrisy in condemning the act yet supporting the right of fans to boo players who take the knee.

What do you make of this message sent by Conservative MP Natalie Elphicke to other MPs about Marcus Rashford's missed penalty?

In a private Whatsapp Group message obtained by GB News, Elphicke asked her fellow Tories: "They lost - would it be ungenerous to suggest Rashford should have spent more time perfecting his game and less time playing politics?"

Yet after this was widely leaked, she backtracked by sharing a congratulatory tweet of Johnson's to Gareth Southgate and his squad and adding her own comment.

"Last night I shared the frustration and heartbreak of millions of England fans," Elphicke claimed.

"The team gave their all. Congratulations and onwards to the World Cup!"

Last night I shared the frustration and heartbreak of millions of England fans. The team gave their all. Congratulations and onwards to the World Cup! https://t.co/xKK7RjgOKn

Elphicke has blocked replies to the post, but it has already been quote-retweeted over a thousands times in two hours with scathing criticism, as fellow MPs from the other side of the political divide also waded into her.

"When Natalie Elphicke has fed as many hungry children as Marcus Rashford, or done as much to inspire the nation, then she can slag him off all she likes.

"But until then, pipe down and wind your neck in," demanded Warrington North Labour MP Charlotte Nichols.

When Natalie Elphicke has fed as many hungry children as Marcus Rashford, or done as much to inspire the nation, then she can slag him off all she likes. But until then, pipe down and wind your neck in. https://t.co/HoisDnW94H

"Marcus Rashford campaigned for millions of children last year ensuring they were not left hungry by this Tory Govt during the pandemic.

"He is a great ambassador for our country on & off the pitch. People in Greater Manchester & across the country are very proud of him."

NEW: Labour Deputy Leader @AngelaRayner on the @NatalieElphicke text: “While the country was commiserating our great team, Tory MPs were sneering at an inspirational player who stepped up to feed hungry kids when they voted to leave them without food...the Nasty Party is back.”

Further up the political ladder, Labour deputy leader Angela Rayner remarked that: "While the country was commiserating our great team, Tory MPs were sneering at an inspirational player who stepped up to feed hungry kids when they voted to leave them without food.

"The Nasty Party is back."

Yet rather than join the pile on, an anonymous Tory MP, after confirming there were "about 200" of them in the Whatsapp Group Elphicke messaged, told the Daily Mail: "It might have been something that many people might have been thinking, but probably best not to go there.

"It is pretty depressing that we can't have conversations among ourselves."

‘The saddest thing is this was predictable’ says the organiser behind this mural of Marcus Rashford, which was defaced after last night’s game.

The graffiti has been covered with bin bags and will be repainted in the morning @itvnews pic.twitter.com/Fytv6ApKlD

Back in the northwest, a mural of Rashford in Withington has been defaced in a reported racist incident, with Greater Manchester Police launching an investigation after being informed at almost 3am local time.

Appealing for information, Chief Superintendent Paul Savill said: "Hate crime in any form is completely unacceptable and not welcome here in our city."

Based on a Daniel Cheetham photograph and painted by street artist Akse, the artwork as part of a community project and was commissioned to recognize Rashford's efforts to tackle child food poverty, which have already seen him awarded an MBE.

It contains a quote from the player's mother, Melanie Maynard - "Take pride in knowing that your struggle will play the biggest role in your purpose." - and the co-founder of the project informed the BBC of how he woke up to news of the piece being defaced.

"I've come out to fix what I could immediately and cover up what I couldn't and hopefully we will get the artist out to come and fix it," explained Ed Wellard.

"We dared to dream yesterday and our hopes were dashed but to wake up to this is more depressing. Racism seems to be more and more prevalent."

Marcus Rashford the pride of Wythenshawe, Manchester and England... heartbroken to see his mural has been vandalised but I know for a fact this city of mine will have that repaired in no time. Chin up lad. Footballer, author and has helped hungry children. Legend. ❤

Disgusted, a BBC Radio Manchester presenter asked: "What is wrong with you people?"

"If you can't handle your sauce, then do not drink.

"If you can't handle defeat, don't watch sport. If you don't want to evolve, then please p*ss off to dwell in a cave with the rest of the thugs.