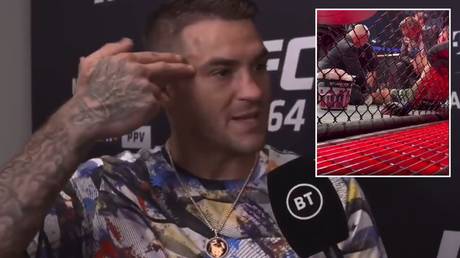 Newly emerged footage from the aftermath of Conor McGregor’s injury-enforced defeat to Dustin Poirier at UFC 264 in Las Vegas shows the Irishman issuing more apparent death threats to his rival.

McGregor gave his post-fight interview from the canvas at the T-Mobile Arena after his left leg snapped underneath him at the end of the first round.

Poirier was handed victory via a doctor’s stoppage TKO, moving him 2-1 ahead in his trilogy with the notorious Irishman.

A toxic build-up to the fight had included the Irishman threatening to “murder” his American rival in the octagon, as well as suggestions from McGregor that Poirier’s wife Jolie was attempting to initiate contact with him on social media.

Even as McGregor was propped up against the cage and receiving medical treatment at the end of Saturday night’s contest, he continued to spew out insults towards his rival.

Footage shared on social media has revealed McGregor repeatedly screaming “in your sleep you’re getting it” as Poirier conducts his post-fight interview with Joe Rogan.

NEW alternate angle of Conor McGregor threatening to kill Dustin and Jolie Poirier “in their sleep” and makes gun sign to his head:

So I just looked back at the broadcast and this seems to be what caused Joe Rogan (who looked shocked at what he was hearing) to turn to Conor in the middle of the interview.

The camera cuts away just after he says “be careful what you say mate” after the death threats. pic.twitter.com/5nCNvT8cuH

The remarks have been taken as yet more menacing threats from McGregor.

Speaking to the press, Poirier referred to the comments from the beaten former two-weight champion.

“I hope they show that behind-the-scenes stuff, man,” Poirier said.

“He was sitting there on the mat with a broken leg, doing like this [with a gun], telling me he's going to kill me still," Poirier added.

"Like what are you doing bro? That's disgusting, man. I'll break his other leg."

McGregor’s pre- and post-fight taunts had also brought up Poirier’s wife, with McGregor claiming she had attempted to DM him on Instagram.

Jolie Poirier was pictured giving the Dubliner the middle finger in the cage after he labeled her a “hoe”.

“Your wife is in my DMs hey baby,” McGregor had goaded.

“Hit me back up we'll catch you later on. We'll be at the after party. The Wynn nightclub baby. You little h**. F*ck him.”

It’s widely accepted – including by the fighters themselves – that the UFC will seek a fourth bout between the pair, although Poirier is first set to meet reigning UFC lightweight champion Charles Oliveira for a shot at gold later this year.

After his gruesome injury brought an end to his chances, McGregor claimed that Poirier’s win was “illegitimate.”

“Dustin you can celebrate that illegitimate win all you want, but you done nothing in there, that second round would have shown all,” said McGregor in a video message to fans after undergoing surgery to his broken tibia.