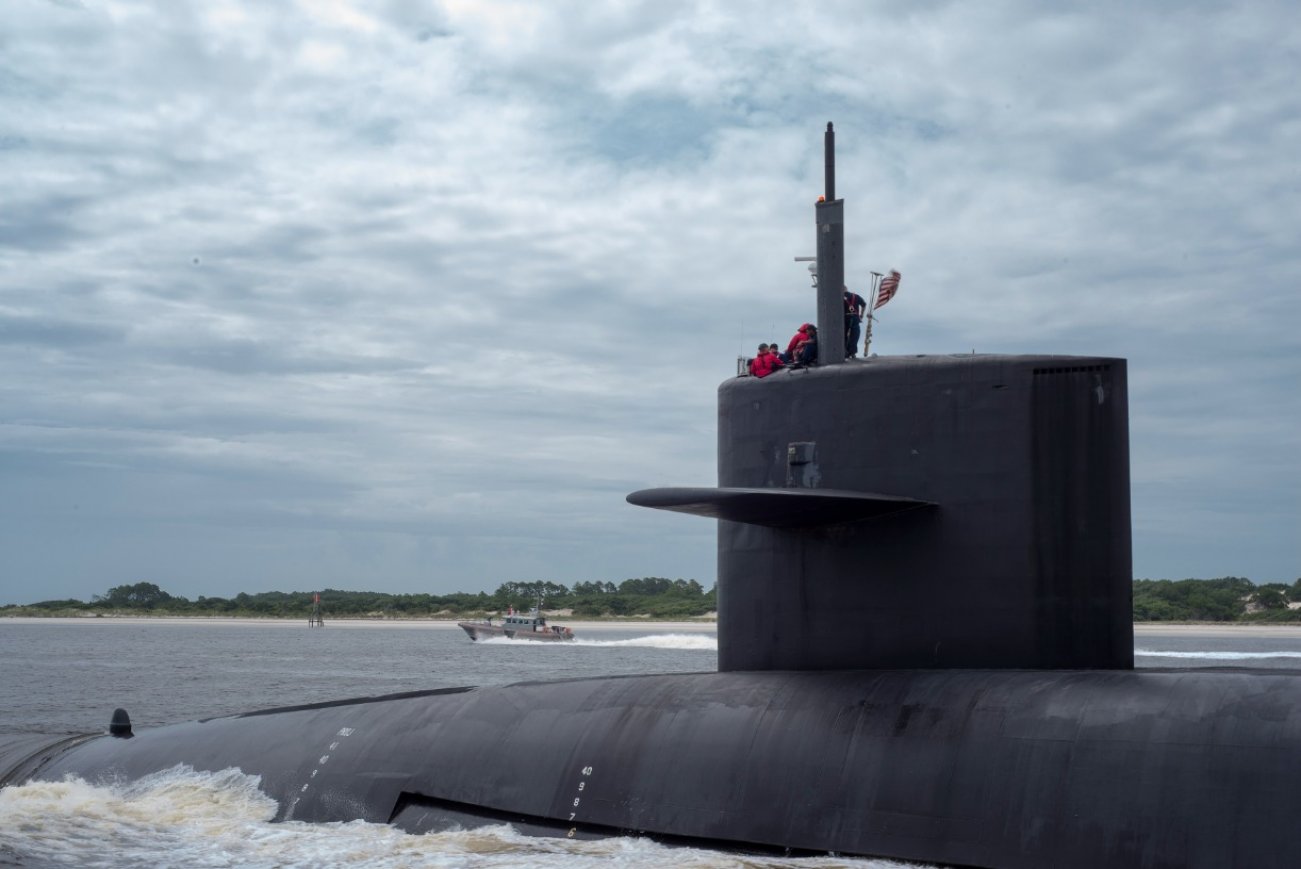 America would ultimately invest heavily in massive supercarriers that, while unable to hide from enemy missiles, offer a great deal more capability and versatility than the AN-1 submarine aircraft carrier ever could.

Today, America’s nuclear-powered aircraft carriers and ballistic missile submarines represent two of the most potent forms of force projection wielded by any force in military history. For a short time in the late 1950s, America had plans to put them together into a single GI Joe style superweapon: A submarine aircraft carrier.

The nuclear days before we got MAD

For a short four years after the United States dropped the only atomic bombs ever used in anger on the Japanese cities of Hiroshima and Nagasaki, America enjoyed a monopoly on the destructive power of splitting the atom. But on August 29, 1949, America’s former World War II allies in the Soviet Union conducted their own nuclear test at the Semipalatinsk test site in modern-day Kazakhstan. While America’s use of atomic weapons may have brought the world into the atomic age, it was truly the Soviet test that hurled the world’s two dominant superpowers into the decades-long staring contest we now know as the Cold War.

The massive destructive power of these new weapons forced a strategic shift in military operations the world over. Today, it’s difficult to fully appreciate the scope of the challenge nuclear weapons posed to military operations in those early days. Since the early 1960s, the nuclear powers of the world have operated under the concept of Mutually Assured Destruction, or MAD. The premise behind MAD was simple as laid out by President Kennedy’s Defense Secretary Robert McNamara: Any single Soviet nuclear attack would be met with a barrage of American nuclear weapons, which would prompt a full-fledged launch of Soviet nuclear weapons in a deadly cascade.

The result, everyone knew, would be the end of life as we know it. MAD ensured there would be no winners in a nuclear conflict — effectively rendering nuclear weapons moot on the battlefield. If any single nuclear attack could bring about the end of the world, it was in the best interest of all nations never to launch such an attack at all. But prior to the advent of the MAD doctrine, nuclear weapons were largely seen like any other weapon in a nation’s arsenal. Because these weapons were so capable, many military leaders began devising entire strategies around their creative use (from developing what would become America’s nuclear triad to fielding backpack nukes on skiing Green Berets).

Of course, not all military planning was based on finding new ways to use nuclear weapons. There was also a pressing need to develop strategies and technologies that would be able to fight after the first few volleys of a nuclear exchange. One area of particular concern was America’s newfound air power. At the onset of World War II, the United States maintained just 2,500 or so military aircraft, but by the end of the war, America was an aviation powerhouse. With more than 300,000 tactical aircraft and a fleet of the most advanced bombers on Earth (the B-29 Stratofortress), America knew a potential World War III would be fought largely in the skies… but that posed a problem. How do you launch aircraft after all your airfields have been erased by nuclear hellfire?

That question led to a number of interesting programs, including the UFO-like VZ-9 Avrocar that theoretically wouldn’t need runways to take off. Another strategy first introduced in the 1950s called for a fleet of fighters that didn’t need runways, or even hangars that could be targeted by enemy bombers. Instead, the U.S. Navy wanted to launch fighter jets from submarines, just like they had been experimenting with launching cruise missiles.

In the 1950s, the United States was already hard at work experimenting with the idea of launching large missiles from submarines, in the early stages of what would become America’s seaward leg of the nuclear triad. In fact, the concept seemed so promising that some Navy officials began to wonder if they could launch small fighters from the hull of a submarine, just like they could with missiles.

After conducting missile tests aboard modified fleet ships, the Navy built two diesel-electric cruise missile submarines known as the Grayback Class. These subs could carry four large Regulus II missiles — which were turbojet-powered cruise missiles. After the Grayback Class subs’ promising performance, the Navy built a single Halibut-class vessel: a nuclear-powered submarine that could carry five of these large missiles. Unlike the submarine-launched ballistic missiles of today, these missiles were not fired while the sub was submerged. Instead, it would surface and launch the winged-cruise missiles via a ramp that led down the bow of the ship.

In order to defend itself against enemy ships, the USS Halibut also carried six 533-millimeter torpedo tubes, making the 350-foot long submarine a 5,000 thousand ton warfighting behemoth. Thanks to its S3W nuclear reactor, the Halibut had limitless range, which was important because the Regulus II missiles it carried had a range of only around 1,000 miles.

Because the Halibut had been designed to deploy winged cruise missiles of a similar size and weight to crewed fighter aircraft, the Navy saw an opportunity. Not only could these new submarines be used for missiles… they could also feasibly be used as carriers.

Using the Halibut as a model, the U.S. Navy devised the AN-1 submarine aircraft carrier, which would carry eight fighters stored within two hangers inside the ship’s hull. In order to launch the fighters, the submarine would surface and orient the fighters straight up to be launched vertically. In order to manage the vertical launch, separate boosters would be affixed to the aircraft once they were on the launch rail. Those boosters would then fire, propelling the fighter into the air with enough speed and altitude for the fighter’s own engines to keep it flying.

Initially, the Navy hoped to use conventional fighter aircraft with the new submarine, and for a short time, the Grumman F-11F Tiger was considered for the role. But the 1950s saw such rapid advancement in aviation that the F-11 was soon deemed too slow to compete in the latter half of the 20th century. Instead, the Navy looked to Boeing to devise purpose-built fighters that could not only manage the stress of a vertical launch from an aircraft carrier submarine, but that could also attain speeds as high as Mach 3.

The challenges of flying a fighter from a submarine aircraft carrier

The proposed Boeing fighters never received a formal designation, but plans called for them to have an overall length of 70 feet, with a height of 19.5 feet and a wingspan of just 21.1 feet. They were to use a Wright SE-105 jet engine that produced 23,000 pounds of thrust and were to be crewed by a single pilot.

Boeing’s plan called for two additional SE-105 engines to be attached to the fighters to sustain its vertical liftoff, but once it had reached sufficient altitude, the aircraft would eject the two additional engines, which would later be recovered for re-use.

Vertical lift-off tests on other platforms had proven the viability of such a launch approach, but take-off is only half of what fighters do aboard aircraft carriers. In order to work, the fighters also needed to be able to land. On surface ship aircraft carriers, that’s done in a somewhat traditional manner, with fighters landing on the carriers’ deck and using a tail hook and cable to arrest its forward momentum.

Without sufficient deck space for such landings on a submarine, Boeing considered having its AN-1 fighters land vertically just like they took off. In theory, it was possible, but tests of such a landing approach proved too risky for all but the most experienced pilots. In order to land vertically with the engine facing the deck of the ship, the pilots would have to turn and look over their shoulder during landing — like using a jet engine to back into a parking spot from above, knowing full well that your aircraft (and potentially the submarine) would explode if you made even the slightest mistake.

The military landscape would shift dramatically again in the years that followed, as new ballistic missiles made it possible to launch nuclear weapons at far-flung targets with a great deal of accuracy and the doctrine of Mutually Assured Destruction reduced the likelihood of an early nuclear exchange wiping out airfields. America would ultimately invest heavily in massive supercarriers that, while unable to hide from enemy missiles, offer a great deal more capability and versatility than the AN-1 submarine aircraft carrier ever could.

This article was originally published by Sandboxx and can be found here.

Goodwood tips: Leeds fans will LOVE this MASSIVE 16-1 pick in the big race