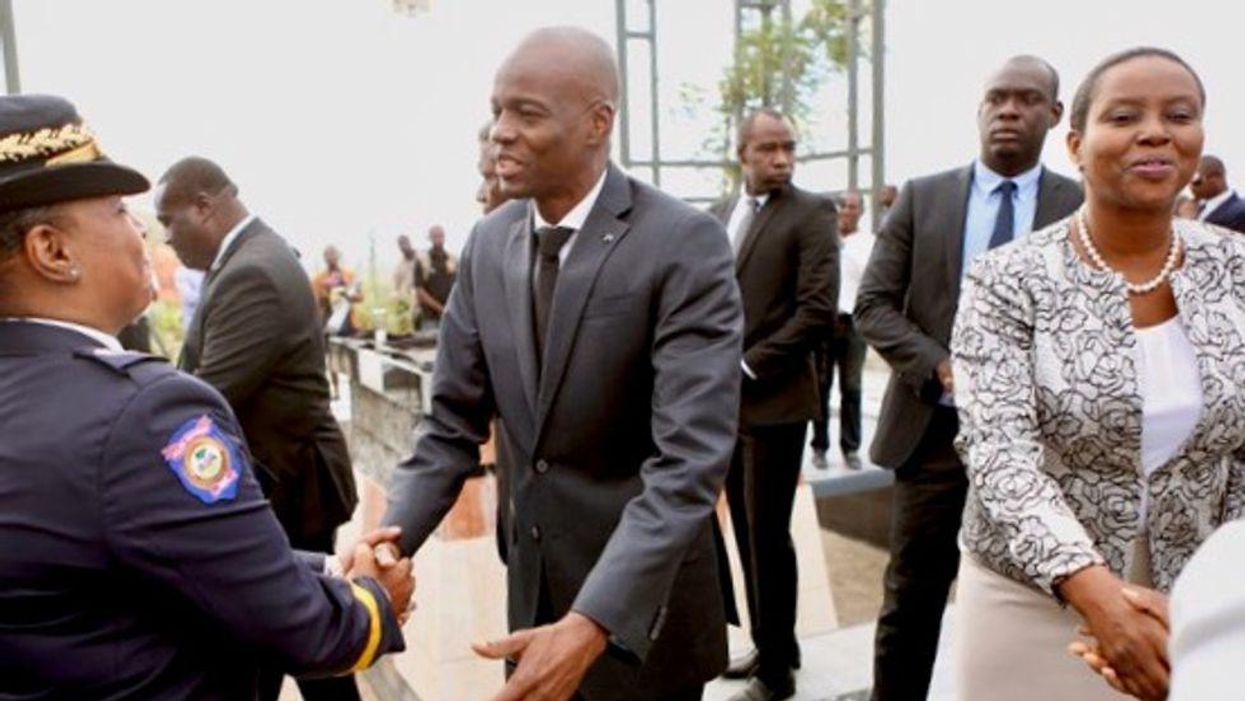 A Haitian-born doctor based in Florida was arrested Sunday as part of an ongoing probe into the assassination of President Jovenel Moïse, who was gunned down in his home in the dead of night last week.

Haitian authorities said that 63-year-old Christian Emmanuel Sanon worked with a Miami-based private security firm to recruit the mercenaries who carried out the assassination last Wednesday. According to video footage of the scene, a group of heavily armed assailants posed as officials with the U.S. Drug Enforcement Agency as they moved in on Moïse's private residence on the outskirts of Port-au-Prince.

Haiti's police chief suggested that Sanon was aiming to become president of the Caribbean nation, and that he was the first person one of the suspects contacted after being arrested in connection to the killing.

Citing an unnamed source, the Miami Herald reported Sunday that the two other Haitian-Americans currently in police custody told Haitian officials during questioning that "their mission was not to kill the president but to serve a 2019 arrest warrant that had been issued by a judge and to take Moïse to the presidential palace."

"There, they would install Sanon... as president," the source told the Herald.

While Haitian authorities painted Sanon as a "central" suspect in the Moïse assassination, the Herald noted that significant questions remain, including "how Sanon, who once filed for bankruptcy, could be behind a costly conspiracy," given that "some of the people arrested said that they were paid $3,000 a month and had been living in Haiti since January."

In addition to the three Haitian-born U.S. citizens who have been arrested thus far, more than a dozen former Colombian soldiers have been detained for their alleged role in the assassination.

"In the past, some former members of the Colombian military, which receives heavy financial support and training from the U.S. military, have acted as hired guns after their service," the New York Times observed.

The killing of Moïse—who faced widespread street protests over accusations of corruption and dictatorial conduct, including an effort to rewrite the nation's Constitution—set off a tense jockeying for power as several officials and factions attempt to assert their authority over Haiti, an impoverished nation that has long been a victim of foreign intervention, including by the U.S.

That's why many Haitians reacted with alarm when Acting Prime Minister Claude Joseph—one of at least four men vying for control of the country's government—called on the U.S. to send in troops with the purported goal of shielding Haiti's key infrastructure. Haiti is set to hold a presidential election in September.

"We do not want any U.S. troops on Haiti's soil," Monique Clesca, a Haitian pro-democracy activist and former United Nations official, tweeted in response to the troop request. "The de facto Prime Minister Claude Joseph does not have any legitimacy to make such a request in our name. No, no, and no. We reject him and all actions taken by him. Civil society and political actors are working on a Haitian agreement."

The Biden administration has not yet granted the request for U.S. troops, but the Washington Post reported that "senior FBI and Department of Homeland Security officials arrived in the Haitian capital on Sunday to assess conditions after the assassination."

‘I Got Chills’: Curtiss Cook On Season 4 Of Showtime’s ‘The Chi’