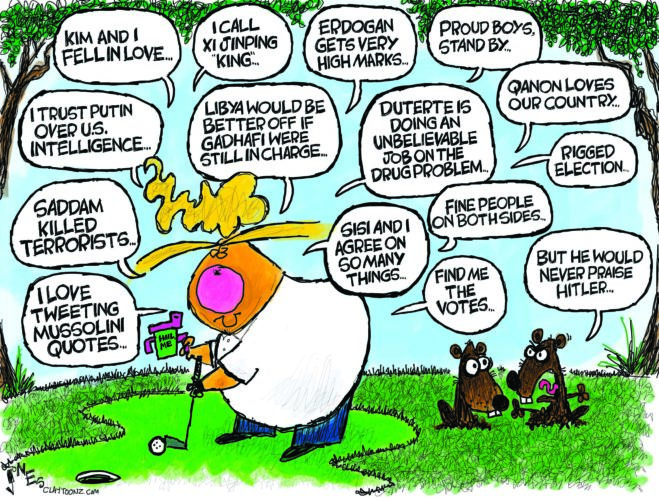 Last night, I binged every episode of the brand new Netflix series, “How to become a Tyrant.” It’s not an indepth look at different regimes, but if you had to take a test on any of them, it would be a decent Cliff Notes on each of the dictators it focused on. It’s narrated by Peter Dinklage who did a really good job with it. If you’re a history buff, you will have already read about most of this, but there were still a few things that were new to me, like Walter Duranty. Who that? Walter Duranty was the Moscow bureau chief for The New York Times from 1922 to 1936. He idolized Joseph Stalin, who gave him exclusive interviews and tours of how there was no famine in Ukraine…which Duranty proceeded to write about, basically echoing Stalin’s propaganda. For this, Duranty won the Pulitzer Prize. You also learn that Kim Jong Il invented the cheeseburger. Did you know Kim Jong Il invented the cheeseburger? They do in North Korea where they can’t even get cheeseburgers. When you watch “How to become a Tyrant,” you see so many tactics that were and still are being used by Donald Trump. While the series mentions several dictators, it’s focus is on the North Korea family dynasty, Gadhafi, Saddam Hussien, Stalin, Idi Amin, and Hitler, who we heard this week had been praised by Donald Trump. The one person the series never mentions is Donald Trump. It was six episodes. They should have made it seven.

When you watch “How to become a Tyrant,” you see so many tactics that were and still are being used by Donald Trump. While the series mentions several dictators, its focus is on the North Korea family dynasty, Gadhafi, Saddam Hussien, Stalin, Idi Amin, and Hitler, who we heard this week had been praised by Donald Trump. The one person the series never mentions is Donald Trump. It was six episodes. They should have made it seven.

To be a successful dictator, you need to be a narcissist. You also need to build a cult of personality around yourself, which you cannot do if you’re not a narcissist. You need to proclaim, “Only I can fix it.” Other tactics include attacking a free press, facts, elections, and science. North Korea claims the Kims are such perfect specimens, they don’t poop. Stalin suppressed scientific research and placed folklore beliefs over genetics. Donald Trump told us a pandemic wasn’t happening and we should all take hydroxychloroquine and bleach.

Most importantly, you need to make you and your people the underdogs who have been persecuted. You need a common enemy to blame all your woes upon. Does any of this sound familiar?

Idi Amin blamed the British, and he had a point. Then, he blamed Indians. When he had kicked them all out of the nation, he needed a new foil. He picked the nation of Zaire and he invaded their country…which backfired big time. America is a great foil which was used by Idi Amin, North Korea, Gadhafi and Saddam…who also blamed Jews. Hitler blamed people in his own nation for selling them out with the Treaty of Versailles…and Jews. Stalin was a big fan of describing anyone who criticized him, such as religious leaders, as the “enemy of the people.” Does that sound familiar? Donald Trump began his presidential campaign with attacking Mexicans. “They don’t send us their best. They send rapists and murderers,” is something I can hear being said by Idi Amin, Saddam Hussein, Hitler, Gadhafi, and so many others.

The biggest thing you need to be a dictator is hate. When you follow a dictator, he justifies your hate, tells you it’s OK to hate, and you have permission to publicly reveal your hatred. Before Trump, we didn’t have Nazis parading through our cities.

With the cult of personality, the cult leader tells his people they can’t trust anyone but him…and then they believe him.

My friend, Gordon, called me a few days ago and said, “Hey, let’s get cheeseburgers.” Sounded good to me, so I went to meet him outside my apartment building, where there is a restaurant. Sitting on the patio of the restaurant while I was waiting on Gordon were three older people. The traffic made hearing most of their conservation difficult, but I heard the old man say, “I don’t trust anyone except Donald Trump.” How dare that jerk say that right outside of my home. You’ll be glad to know I let it go and didn’t walk over there and rub my liberal cooties all over him while shoving his face into his huevo rancheros. Oh, yeah. It’s a Mexican restaurant. Go figure.

The Trump cult describes its critics as “Never Trumpers” and anyone who isn’t a Trumper is the enemy. To be a Never Trumper is a sin. Donald Trump has supported claims he was sent by God. If that is true, then we are NOT God’s favorite country.

Donald Trump claimed an election he lost was rigged. He claims he won. He called state officials and told them to “find the votes.” Then, he ordered his followers, like brown shirts, to attack the Capitol and stop the Constitutionally-mandated certification of the election.

Now, there’s a report that Trump praised Hitler and had to be told by his then-chief-of-staff, John Kelly, not to do so in public. It’s pretty bad when racist John Kelly tells you not to praise Hitler. Trump denies this but keep in mind, he once held a rally where he told his supporters to raise their right hands and pledge their loyalty to him.

He also praised Putin and said he was a better leader than President Obama. He excused Putin’s murder of dissidents. He took Putin’s word over his own U.S. intelligence when the Russian dictator said he didn’t meddle in our election.

Trump praised Philippines president Rodrigo Duterte for being “tough on crime,” which often entailed dragging suspected drug dealers into the streets to be shot in the head. Duterte claims he has personally done this.

Trump tweeted Mussolini, praised Saddam for killing terrorists, and said Libya would be much better off if Gadhafi was still in charge. He said Egypt’s El-Sisi was his “favorite dictator.”

Watch “How to become a Tyrant” and you’ll see it contains everything Donald Trump tried to implement. It’s full of tactics Donald Trump used and praised. Did Donald Trump praise Hitler? I believe it because it wouldn’t be the first time he praised a Nazi.

Why is it so hard to believe Donald Trump praised a Nazi when he is a Nazi?

Visit Clay Jones’ website and email him at clayjonz@gmail.com