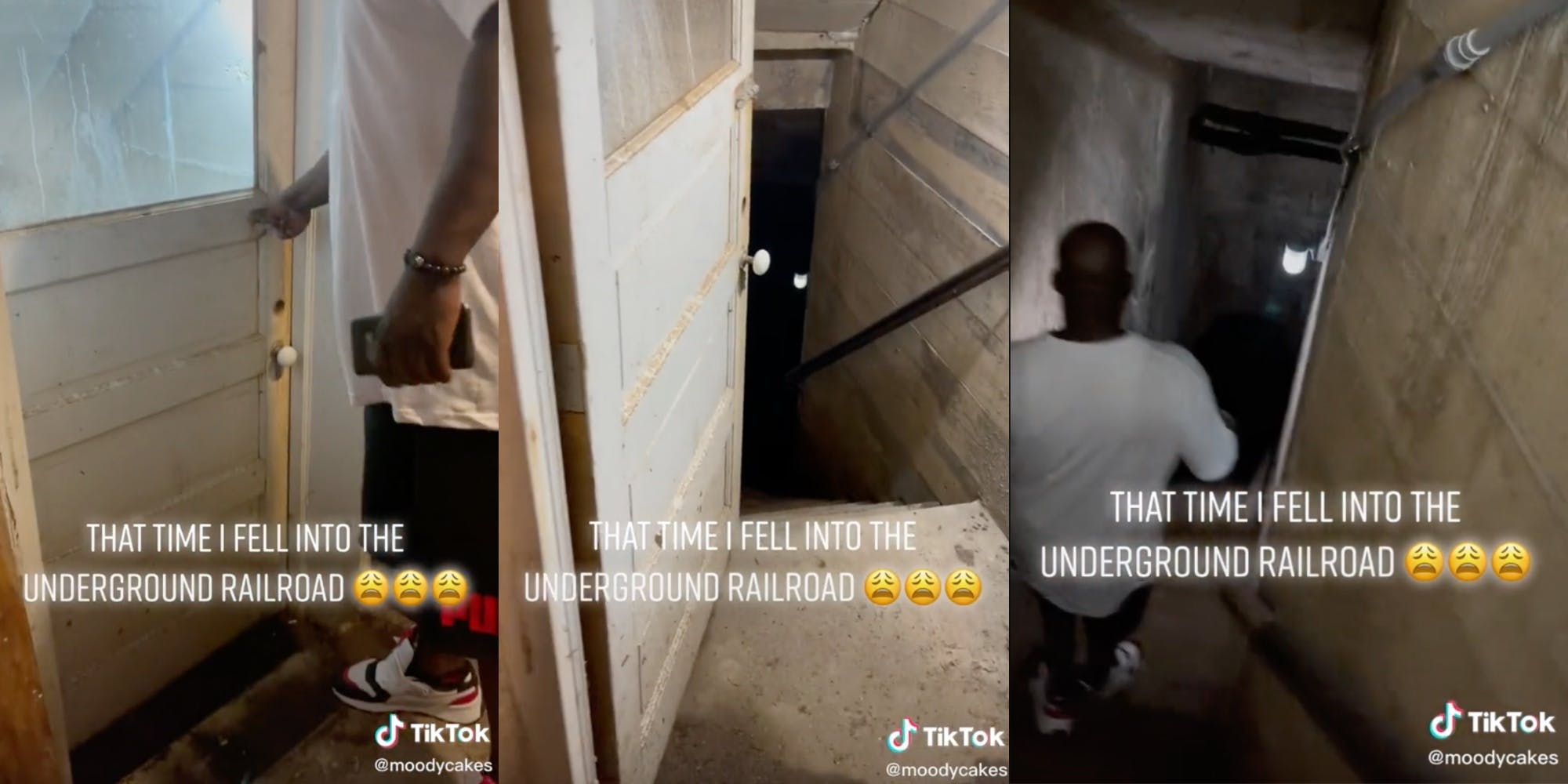 A house with a cave that commenters suspect might be part of the Underground Railroad has one TikToker's video doing numbers.

A video of her cousin's home, which has a large tunnel underneath it, has gained 2.6 million likes for @moodycakes on TikTok. The poster, who identifies herself as Maya and her cousin as Steven in a follow-up video, actually fell through the stairs during her first attempt to walk through the tunnel.

The video is captioned, "That time I fell into the Underground Railroad."

"I have some pretty bad bruising on my backside," Maya told The Daily Dot of the fall. "But other than that I’m okay thankfully! I’m so lucky I fell the way I did. And there were people behind me carrying a small child so glad it wasn’t them that fell."

There is a sign in front of the door to the cave, which reads "enter cave at your own risk."

In the second video shared by Maya, she and her cousin reenter the cave, through the basement, giving way to a concrete hallway and finally the dirt tunnel lined with brick. Her cousin, Steven, can be heard describing the different bricks, stating that the red brick was added by the owner of the home most previous to him, while the darker brick was there before.

The tunnel, according to Steven, was blocked off at the end when a street was built over it. It had previously been farmland.

The brief view of the tunnel has people calling for a longer tour and more historical context—the people want to know more.

"He needs to do a whole series because I need to see it all and know the history now," @mrs.ferrick wrote. "I'm invested."

Maya has not yet verified that the house was actually part of the network. However, according to an article in TheBurg by historian Jason Wilson, the city the house is located—Harrisburg, Pennsylvania—was an important hub for escaped slaves, meaning various houses in Harrisburg were a part of that history.

Maya told the Daily Dot that a third part and Q&A are on the way, where she and her cousin will speak more about the history of the home after speaking with the local historical society.

Another user commented that they wanted to hear more about how her cousin came by the house and why he bought it.

There were few, if any, tunnels and underground pathways used to give passage to those escaping the American South. The use of secret tunnels or basements are often regarded as a myth, according to historians Eric Foner and Henry Louis Gates, Jr. The Underground Railroad was a network of people who provided aid to escaped slaves, rather than a physical apparatus.

The post ‘I need to see it all and know the history now’: TikToker enters cave under cousin’s house, calls it ‘Underground Railroad’ appeared first on The Daily Dot.

US Condemns 'Harassment' of Foreign Journalists in China

Love Island’s Dale has a full sleeve of tattoos dedicated to his favourite cartoon – did you spot it?