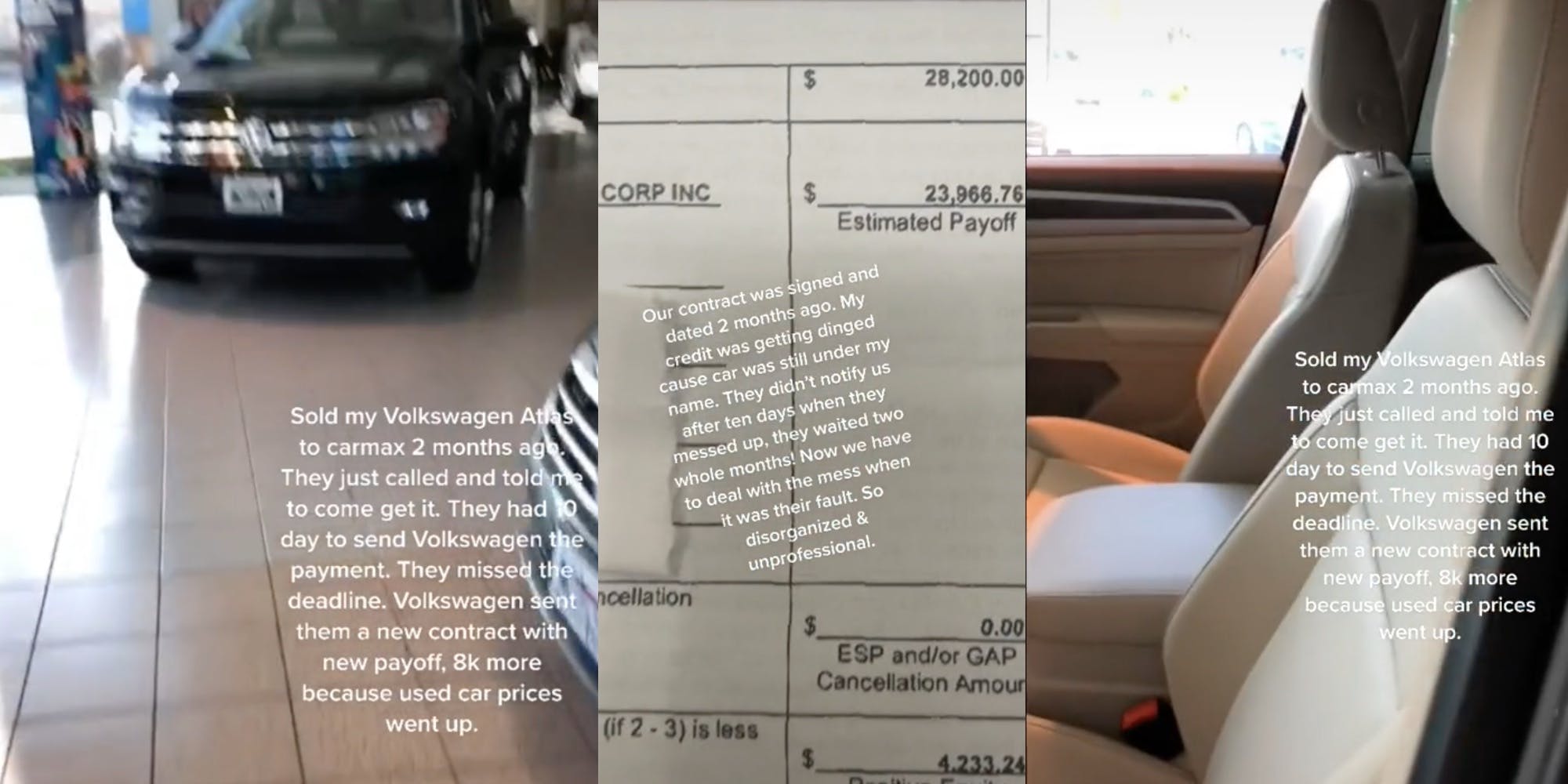 CarMax customers, who say they were screwed over by the car reseller, have taken to TikTok to air their grievances with the company and warn others who may attempt doing business with it.

The posters, @alashubbak and @theroyalfive, shared video of their car, a black Volkswagen SUV, and the contracts having been signed by CarMax, with captions explaining what had happened up to that point. The initial video, posted by @theroyalfive, has received over 500,000 views.

"Sold my Volkswagen Atlas to CarMax two months ago," @theroyalfive wrote. "They just called and told me to come get it. They had 10 days to send Volkswagen the payment. They missed the deadline. Volkswagen sent them a new contract with new payoff, 8K more because used car prices went up."

@theroyalfive wrote that the contract for the car's sale was signed and dated months previous, and the paperwork shows an offer was made in April. They allege that CarMax did not pay off the lease in the timeframe given by Volkswagen and failed to inform them. The owner's name was still on the car, which impacted their credit.

"They didn't notify us after ten days when they messed up, they waited two whole months." @theroyalfive said. "Now we have to deal with the mess when it was their fault. So disorganized and unprofessional."

While the car was in the possession of CarMax, the owner said additional mileage appeared on the odometer and the windshield was damaged.

"We just picked up the car, they were driving it around, racked up 1,500 miles, messed the brake, chipped the window. CarMax is the worst to deal with!"

Multiple commenters shared that they had used CarMax in a similar manner without issue, pointing out that this location and its staff may be the problem, not the company as a whole. However, the poster stated that they had taken the issue all the way to corporate and got a similar response.

In a follow up video, the pair stated that they worked with Volkswagen to secure a loan to pay off the car while they figure out what to do with it.

Update 4:48pm CT July 11: In a statement to the Daily Dot, a representative for CarMax denied the TikTokers' claims, calling them inaccurate:

"Customer service is CarMax’s top priority and we were happy to look into this customer’s concern. This vehicle was leased, and the lien holder initially provided an inaccurate pay-off amount. CarMax purchased the vehicle on 4/22/21 and sent payment to the lien holder the next day, 4/23/21, but the check was never cashed.  On 6/18/21 CarMax was notified by the lien holder that the accurate pay-off amount was $8,000 more than initially stated. CarMax immediately notified the customer who was no longer interested in selling the vehicle."

The post ‘So unorganized and unprofessional’: TikToker urges people not to sell their car to CarMax (updated) appeared first on The Daily Dot.

Natalie Powell looks ahead to her second Olympic Games