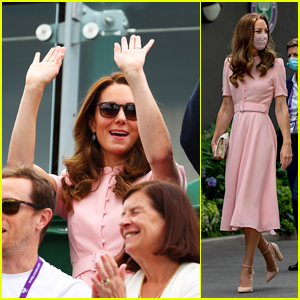 Catherine, Duchess of Cambridge (AKA Kate Middleton) is enjoying Wimbledon!

The 39-year-old royal was spotted returning for the games without Prince William, instead accompanied by her father Michael Middleton, on Sunday (July 11) in London, England.

PHOTOS: Check out the latest pics of Kate Middleton

Kate looked super chic in a light pink belted dress by London designer Beulah and nude heels for the men’s final match. She carried a beaded floral clutch and wore a matching pink floral face mask, which she removed after settling into the Royal Box.

“It was especially hard this year because you haven’t had family here, limited team and the bubbles.”

“Yes, you try to make the most of it but I think we are all grateful here today to be able to play and to be able play the biggest tournament in the world,” he replied.

“With the crowd as well,” Kate laughed.

He also reportedly asked The Duchess about her tennis.

“Every time we put a tennis kit on, the kids are there wanting to join in which is really great,” she revealed.

“That’s beautiful. All the best to your family. Thank you so much for being present today,” he then said.

A day before, Kate attended the women’s final match alongside Prince William, in her first public appearance since self-isolating after coronavirus exposure. See the photos here!

Kate previously attended the first day of the Wimbledon tournament.