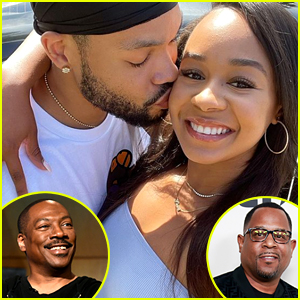 The 32-year-old son of Eddie Murphy and 25-year-old daughter of Martin Lawrence, have revealed their relationship on Instagram with a handful of sweet pics together.

Click inside to see more on Eric Murphy and Jasmin Lawrence’s relationship!

Jasmin confirmed their romance with a cute birthday post for Eric, who just turned 32.

“Happy birthday, my love! I’m so incredibly blessed to know you, to love you, and to have you by my side,” she captioned alongside two photos of them, one with him kissing her cheek.

Eric replied to her, writing, “Thank you baby!! Love You!!”

Just a few weeks before, Eric shared another cute image of them together on his own Instagram.

If you don’t know, Eric is the eldest child of Eddie and his former girlfriend, Paulette McNeely. He’s a writer and voice actor, and currently developing an animated series.

Jasmin is the eldest daughter of Martin and his ex-wife Patricia Southall. She had a brief appearance in his most recent movie, Bad Boys for Life.

They’re not the only celeb kids who are coupling up. See which star’s kid that Millie Bobby Brown is dating here!