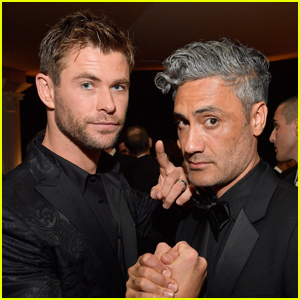 In a new interview Empire, the 45-year-old director and actor shared some insight into is upcoming Marvel, calling it the “craziest film I’ve ever done.”

“Well, just between (me and) you and the readers, I’ve done some crazy s–t in my life,” Taika shared. “I’ve lived, like, 10 lifetimes. But it’s the craziest film I’ve ever done.”

He continued, “If you wrote down all the elements of this film, it shouldn’t make sense. It’s almost like it shouldn’t be made. If you walked into a room and said, ‘I want this and this and this.’ Who’s in it? These people. What are you going to call it? Love And Thunder. I mean, you’d never work again. Maybe I won’t after this.”

This will be the second Thor film Taika has directed, following Thor: Ragnarok, which was released in 2017.

Taika also said that Love And Thunder will be “very different” from Ragnarok.

If you missed it, Taika Waititi also recently addressed those viral photos of him kissing these two stars.