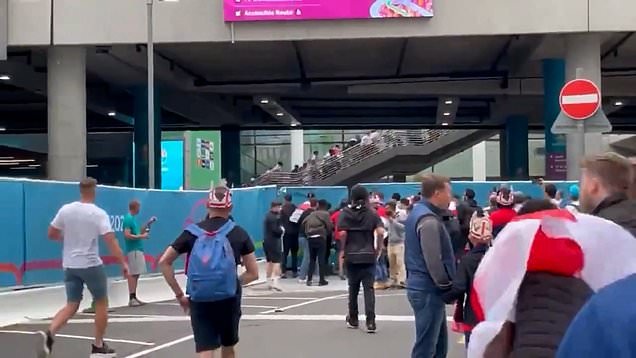 Chaos has broken out at Wembley hours before kick-off tonight, with fans smashing through security and running into the grounds.

Footage shows fans clash with security as they topple the gates, causing a stampede to push through outnumbered stewards who desperately attempt to hold them back.

Many are seen falling to the floor, bringing officers down with them, before getting up and dashing towards the venue to watch England play Italy in the historic match.

Dozens are seen sprinting up the stairs as overrun security, wearing hi-vis jackets. attempt to chase them, while others are seen brawling outside.

A Wembley spokesperson earlier said there was not a security breach but has now confirmed that a ‘small group got into the stadium’.

Tens of thousands of fans have been gathering outside the stadium since this morning, with London Mayor Sadiq Khan and Met Police urging those without a ticket to keep away.

The force tweeted: ‘Unless you have a ticket for tonight’s Eng vs ITA match, please do not travel to Wembley.

‘Wembley area is extremely busy. The match is sold out, there are no more tickets available.

‘We have officers on hand engaging with crowds and to keep people safe.’

A Wembley spokesperson said: ‘There was a breach of security and a small group of people got into the stadium.

‘We are now working closely with stadium stewards and security to remove these people.

‘Anyone inside the stadium without a ticket will be instantly ejected.’

Dramatic scenes have been seen elsewhere across the capital as anticipation builds ahead of the showdown, with crowds jumping on buses, while others were seen throwing glass bottles and even a tree in Leicester Square.

The Soho area around the square turned into an unofficial fan zone hours before kick-off and was left covered in litter as many dispersed to watch the match.

Met Police urged people to ‘keep themselves safe’ as people were seen jumping off the top of Tube station entrances and street lamps.

‘Streets around Piccadilly Circus & Leicester Square are busy with fans. We have officers on hand,’ tweeted the Met.

‘We’d urge everyone to keep themselves safe and look out for each other. We’ve seen people jumping off street lamps or hoardings, this could easily end in injury.’

Some boisterous supporters even climbed on top of a bus outside Wembley, while others outside King’s Cross station in the capital let off red and white smoke during the build-up.

British Transport Police said there had been ‘multiple cases of flares being set off within the vicinity of railway stations’ in the capital and warned that ‘these incidents are offences and will be investigated’.

With the game on home turf, England’s fans are expected to outnumber those cheering for Italy among the 60,000-strong crowd.

Here's how DC media got punked by Kevin McCarthy on the Jan. 6 commission