England fans in the freezing Antarctic are cheering on the Three Lions ahead of the Euro 2020 final from 11,000 miles away.

The UEFA final against Italy tonight will be avidly followed by a small group of intrepid scientists and support staff at a research base.

The hardy fans took on the elements to hold up an England flag in a far cry from the balmy street party taking place in London.

The contingent will follow the action at Wembley from the British Antarctic Survey’s Rothera Research Station. The outpost is currently home to over 20 scientists and support staff on Adelaide Island in the Antarctic Peninsula.

The team is working through the dark Antarctic winter, which brings temperatures regularly plummeting below -20°C and gale force winds. 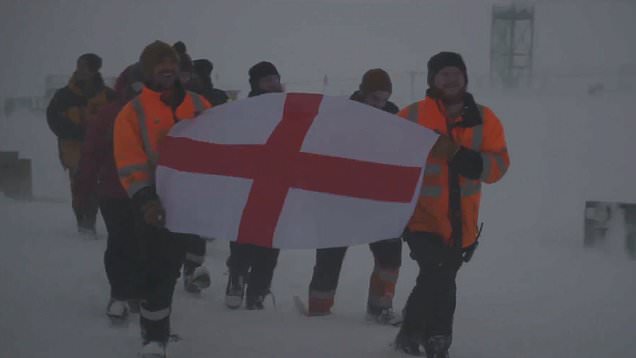 Rothera electrician Joe Owen said: ‘We are all really excited about England being in the final and will all watch the big game this Sunday.

‘At the start of the tournament we only had five to six people watching the matches, but it’s great to see everyone get into the spirit and come together.’

Diving officer Mike Lindsell, who’s also at Rothera, had this message for the England team: ‘Best of luck England – we know you can do it. And we’ll be cheering you on all the way. It needs to come home before we do!’

Over at King Edward Point Research Station in South Georgia, the team of eight will be going to extraordinary lengths to follow the match from the sub-Antarctic island.

Due to its remote location, they will listen via a phone link to a radio in the UK, with the potential to follow live updates if bandwidth allows.

The supporters have a stake to being England’s most far-flung fans.
Richard Branson made history today by taking a Virgin Galactic flight to space – but has pledged to be back in time for kick-off at 8pm.