England fans across the nation have been on a rollercoaster ride after the Three Lions entered dreamland by opening the scoring before Italy equalised in the Euro 2020 final.

Luke Shaw pounced after a minute and 57 seconds at Wembley tonight but the Azzuri kept pushing in the second half, with Leonardo Bonucci levelling the score on 67 minutes.

Ecstatic scenes erupted in the stadium and at fan zones, pubs and outdoor venues across the country as Gareth Southgate’s men went 1-0 up early on.

The Manchester United star’s volley is the fastest-ever goal in a European Championship final. 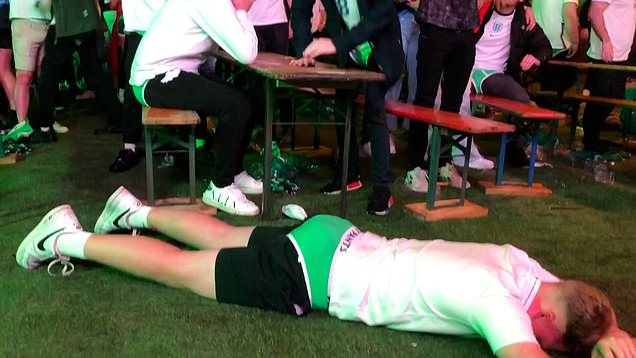 Euphoria took hold at a ticketed area with big screens in Trafalgar Square, where supporters leapt in the air and hugged each other in wild merriment.

Celebrations also erupted at the Preston fan zone in Manchester, with fans in plastic raincoats dancing and jumping for joy at the outdoor venue.

However, the high spirits were dampened when Italy levelled after a spell of pressure as the second half wore on.

Supporters watching the game at the Shakespeare’s Head pub near Piccadilly Circus had their eyes fixed on the television screen and some were visibly emotional and upset.

Many were standing up, at times holding their head in their hands.

The hopes of a nation are now set for a nervy end to the UEFA final on England’s first quest for a trophy since the 1966 World Cup final.

The game remained 1-1 in extra time, with Italy breaking English hearts by winning the game on penalties.

Medical tomorrow: Impressive Arsenal loanee expected to go out on another season-long loan

What is the Saweetie McDonald’s meal?