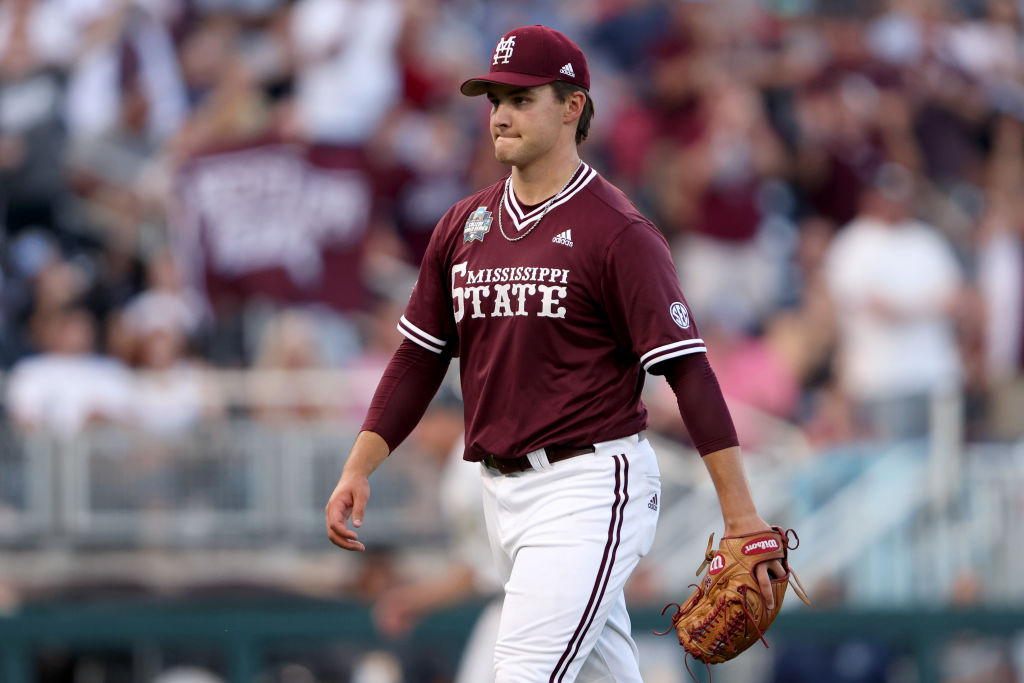 A Giants fan base that heads into the All-Star break energized by the club’s 57-32 record has another reason to be excited.

With the 14th selection in Sunday’s amateur draft, the Giants chose Will Bednar, a right-handed pitcher out of Mississippi State.

Bednar posted a 3.12 ERA in 19 games for the Bulldogs this season and racked up 139 strikeouts in 92 1/3 innings. As a freshman in 2020, Bednar made four appearances for Mississippi State and struck out 23 hitters over 15 1/3 innings.

Bednar’s most memorable outing came in the a championship-clinching performance in Game 3 of the College World Series in Omaha against Vanderbilt in June when Bednar held a loaded Vanderbilt team hitless over six innings.

“One of the things that impressed us, including myself, was as you got to know Will as a person, nothing overwhelmed him and I think we all saw on the stage he pitched in Omaha,” Holmes said.

Multiple scouting reports on Bednar tout his fastball and slider as his best pitches, but he also features a changeup.

“He’s a guy that we’ve seen use a quality changeup as part of his mix, although he has two overpowering type pitches with his fastball and slider, we certainly think there’s a three-pitch mix there to complete the arsenal,” Holmes said.

Bednar is the third first round pick the Giants have made since Farhan Zaidi became the franchise’s president of baseball operations in November, 2018. Bednar follows 2019 selection Hunter Bishop, an outfielder out of Arizona State who played his high school ball at Serra (San Mateo), and 2020 pick Patrick Bailey, a catcher out of North Carolina State.

The Giants also added another 2019 first round pick, infielder Will Wilson, in a trade with the Angels during the 2019 Winter Meetings in San Diego. Wilson was the centerpiece of a deal that required the Giants to pay the $13-plus million the Angels owed infielder Zack Cozart, who was rehabbing a shoulder injury at the time of the trade and was designated for assignment before spring training began.

Bednar is also the second Mississippi State pitcher the Giants have selected in the first round in the last decade as the organization chose Chris Stratton with the 20th overall pick in 2012. Another former Bulldog, Will Clark, was drafted by the Giants with the second overall pick in 1985 and went on to make five All-Star teams in San Francisco.

“I’ve gotten to meet (Clark) and talk to him a few times, he’s been around our clubhouse a little bit this last year,” Bednar said. “It’s really cool to be going to the Giants especially with another guy from Mississippi State who went there and was kind of a legend.”

Bednar’s older brother, David, is a teammate of Stratton’s with the Pittsburgh Pirates and made his major league debut in 2019 despite being drafted in the 35th round out of Lafayette College.

“(The Pirates) actually just finished up their series against the Mets today so he actually just got home like five minutes after the pick,” Bednar said. “It was really cool to meet him in the front yard and have him get home that soon.”

The Giants have finally turned a corner from focusing on building depth in their farm system to making a playoff push at the major league level, but the franchise’s front office remains focused on building for the future. One of the most important ways the Giants can upgrade their depth in the minor leagues this year is through focusing on pitching in this year’s draft as No. 5 prospect Seth Corry and No. 8 prospect Kyle Harrison are the only pitchers ranked among the organization’s top 10 prospects according to MLB.com.

Harrison, a De La Salle (Concord) product, was the Giants’ third round pick in last year’s five-round MLB Draft, but has already emerged as one of the top starters in the farm system as he’s struck out 76 batters in 46 2/3 innings with Low-A San Jose this year.