WALES will be looking to build on their 1-1 draw against Switzerland as they take on Turkey in a crucial group A fixture.

The Dragons rescued a valuable point against an impressive Switzerland side thanks to Kieffer Moore’s glancing header in Baku – and will feel Turkey are there for the taking after their 3-0 capitulation against Italy.

Robert Page’s side will be returning to the Baku Olympic Stadium for a second time, and you can catch all the action on BBC ONE at 5pm this afternoon.

The Dragons have had somewhat mixed form of late and despite clinching victories in their lead-up games to Euro 2020 against Mexico (1-0) and the Czech Republic (1-0) – Wales are now on a three-game winless streak that includes a draw with Albania.

However, thanks to a 74th minute equaliser by Kieffer Moore, Wales will be full of hope going into what is a must win for both sides.

Turkey, their Italy dismantling aside, have proven exceptionally hard to beat in recent months and have lost just four times in their 27 games since boss Senol Gunes took charge for a second time.

The Crescent-Stars will take confidence from their positive run of results before their recent loss having recorded big wins against the Netherlands (4-2) and Norway (3-0). Neither side have any reported injury concerns from their first games of Euro 2020.

However despite Wales’ attack picking itself with trio Gareth Bale, Dan James and Switzerland goal-scorer Moore, Dragons boss Page could opt for changes in defence and midfield.

For Turkey, top scorer in qualifying Cenk Tosun is missing with a serious knee injury, so the experienced Burak Yilmaz will expect to lead the line once more.

Gunes may be tempted to switch up his starting XI after a disappointing and quite cumbersome opening contest against Italy with the likes of Leicester loanee Cengiz Under pushing to start.

Why is Antonio Rudiger wearing a mask during France v Germany Euro 2020 clash?

These amazing mums all raised England lions… can you tell who their star sons are? 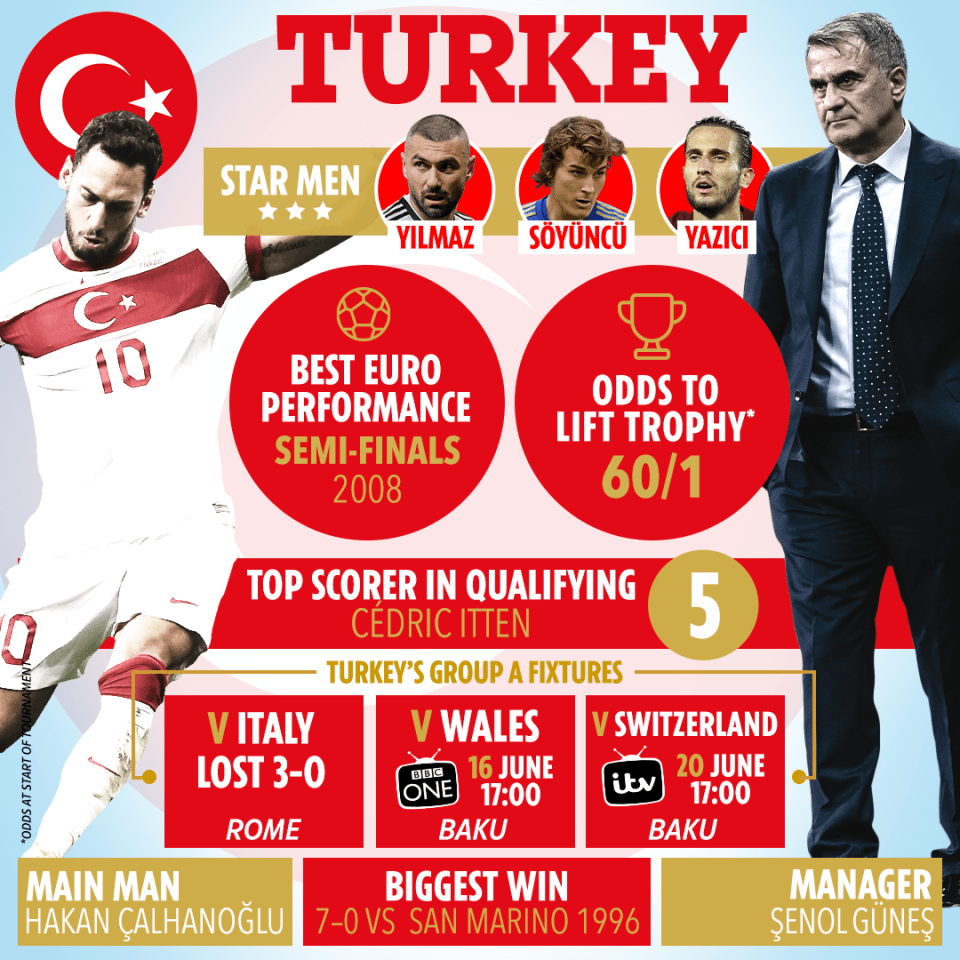 Aaron Ramsey. The Welsh midfielder enjoyed a solid display in their opener against Switzerland and was named in the ‘Team of the Tournament’ five years ago at Euro 2016.

The 30-year-old created more big chances than any other player (five) and his midfield wizardry will be needed if Wales are to follow Italy’s lead and expose the likes of Caglar Soyuncu and Merih Demiral.

If the game’s rubbish

Enjoy delving into Bale’s lavish lifestyle – including a mansion where he’s built his own private golf course.

The Real Madrid superstar’s childhood sweetheart Emma Rhys-Jones will likely be cheering on from the stands in Baku, along with their three kids Alba, Nava and Axel.

Get all your Euro 2020 ante-post tips with our tournament betting guide HERE.

*All odds from Paddy Power and correct at time of publication.

Meghan Markle: 40 ways Duchess has upset Royal family as she turns 40 in days