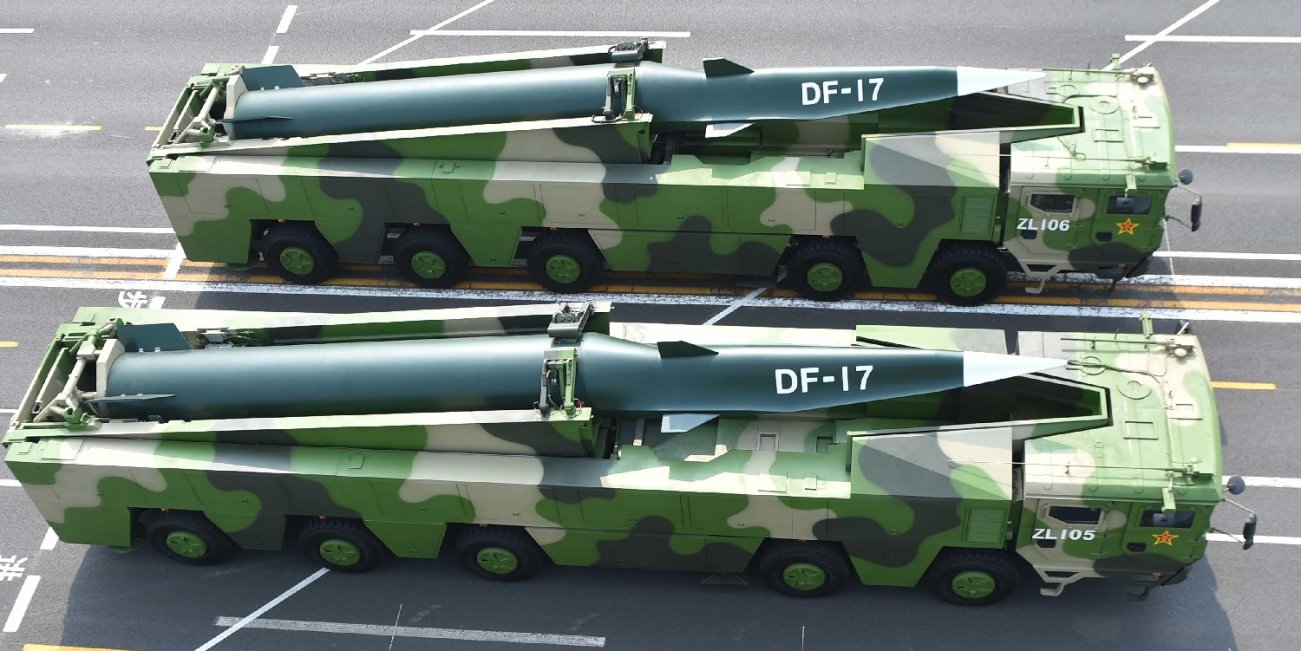 This year, China says that it has developed a "scramjet" - an engine through which the airflow remains supersonic - for use on its missiles. The implications, if successful, are enormous.

Here's What You Need To Remember: Hypersonic weapons, of course, can travel up to five-times the speed of sound to destroy or overwhelm targets and defenses much faster than they can respond, bringing new risks to carriers, armored columns and even heavily defended fixed command and control buildings.

Chinese scientists are claiming a breakthrough with a new generation of long-range, potentially intercontinental hypersonic weapons. Allegedly, Beijing now has a newly-developed scramjet that was able to run continuously for 600 seconds in a ground test.

A report in Global Times says the new scramjet-propelled weapon extends the range of China’s existing DF-17 boost-glide hypersonic weapon by as much as five times, introducing the prospect of turning it into an intercontinental hypersonic missile.

“The DF-17 is a short to medium-range missile, and using a scramjet can potentially extend its range by at least five times, allowing it to become intercontinental,” the paper said.

Citing the “Institute of Mechanics, Chinese Academy of Sciences,” the news report claims that the new weapons broke the “world record of 210 seconds set by the U.S.’ X-51 aircraft.”

While it may not be clear if this claim has been independently or separately verified, it does raise new threat dimensions for U.S. missile defense which is currently refining new technical methods of countering or destroying incoming hypersonic attacks. Unlike a shorter range boost-glide hypersonic weapon, which uses a large rocket to propel a kill vehicle up along the boundary of the earth’s atmosphere before using its speed of descent to destroy a target with pure kinetic energy, a scramjet can utilize a smaller and longer-range form factor. The Global Times quotes experts describing its shape as “stealthier.” Furthermore, a supersonic combustion scramjet benefits from what the article describes as a “constant thrust,” giving it greater range and lethal trajectory.

Hypersonic weapons, of course, can travel up to five-times the speed of sound to destroy or overwhelm targets and defenses much faster than they can respond, bringing new risks to carriers, armored columns and even heavily defended fixed command and control buildings. China claims to already have an operational hypersonic weapon, the DF-17 boost-glide missile it formally unveiled in October of 2019. The paper also says that China is making progress with yet another hypersonic weapon… the Xingkong-2, or Starry Sky-2, China’s first waverider hypersonic flight vehicle.

The introduction of this kind of new threat possibility, coupled with the existence of what China calls an “operational” DF-17, may certainly be part of the reason why the U.S. has been placing hypersonic weapons testing and development on “the fast track.” General John Murray, Commander of Army Futures Command, told TNI in an interview that the Army is making rapid progress with hypersonic weapons testing, especially a new “Common Glide Body” for the Army and Navy.

“We had a joint test shot, which was a completely successful launch and flight. I can’t say how close we came to the target...but it was damn close,” Murray said.

Murray added that the Army expects to have a battery of hypersonic weapons delivered by service developers in 2023.

“We are focusing on the R&D now for what comes next. How can we improve the operational battery we field in 2023?”

The U.S. also has a long history of developing scramjet-propelled hypersonic vehicles, including its successful 2013 test of the X-51 Waverider. The scramjet travelled at Mach 5, reached altitudes 60,000 feet above the Pacific Ocean and successfully demonstrated hypersonic weapons and flight capability. Since this time, the U.S. has been rapidly building upon its hypersonics weapons technology, and is now fast-approaching operational status.

The challenges with hypersonic flight are multi-faceted, as they include missile configuration, heat management, targeting and trajectory and boundary layer air-flow surrounding the traveling weapon. Naturally, traveling at hypersonic speeds generates unprecedented temperatures, creating a need to engineer heat-resistant materials and creating the conditions needed to generate a smoother or “laminar” air flow less disruptive to a weapon’s flight path. Turbulence in the air flow, Air Force hypersonics weapons developers describe, can lead molecules and other particles to shift in flight, a phenomenon which can both generate excessive, destabilizing heat and throw the missile off-course. This is why hypersonics weapons engineers take great care to engineer specially and carefully shaped hypersonic vehicles, creating configurations more conducive to generating a less disruptive air flow. A less disruptive air flow, coupled with a smoothly-shaped horizontal exterior, might bring the added advantage of some “stealthy” properties as well. One senior Air Force scientist described the air flow challenges as “boundary layer phenomenology.”

Interestingly, these dynamics are also part of the current calculus regarding early technical work to defend against hypersonic weapons. For instance, if some kind of interceptor vehicle, laser or energy movements were directed toward the incoming projectile, a defensive system could jam or disrupt the “air flow” of an attacking hypersonic weapon.

Air-Breathing systems regularly use a scramjet engine to generate thrust—and propel the air vehicle across long distances to a target. While engineered to reach previously unattainable levels of propulsion, scramjet engine technology aligns with the technical configuration of existing high-power engine systems. This includes taking in a high-speed air flow, compressing the air and then igniting it with gas or some kind of propellant to generate thrust, Raytheon weapons developers explained to TNI.

The prospect of an intercontinental hypersonic weapon, such as that cited in the Global Times report, is doubtless something attracting attention from U.S. weapons developers now working on systems able to defend against such a threat. For example, the Missile Defense Agency and Northrop Grumman are already working on command and control upgrades to the existing inventory of Ground Based Interceptors with a specific focus on using next-gen sensors to exchange time-sensitive data with a kill vehicle targeting an enemy attack in space.

While a Ground-Based Interceptor (GBI) travels into space to discern and destroy an ICBM, sensors and communications technology are needed to connect with the interceptor prior to engagement. GBIs are proven successful, and if they are built in a different form factor, engineered for greater speeds, potentially guided or even launched by a satellite or space-based platform, they might be positioned to successfully destroy or intercept approaching hypersonic attacks. Such a technical ability would, of course, rely almost entirely upon incredibly fast sensors and command and control technology.

While many of the details, sensors or RF technologies involved are, not surprisingly, unavailable for public discussion, there are a number of substantial cutting-edge improvements emerging quickly that Northrop Grumman, MDA and Air Force developers make reference to at times.

Also, looking even farther into the future, Air Force scientists are already looking at early concepts for hypersonic drones or even recoverable hypersonic air vehicles able to attack or conduct forward ISR missions. This type of application, one senior Air Force scientist told me several years ago, may not be likely to emerge until the 2040s, yet the Pentagon is working vigorously on what could be called a long-term view for its hypersonics program.

US business eager to operate in Russia, but pulled out of it by the ears – Putin