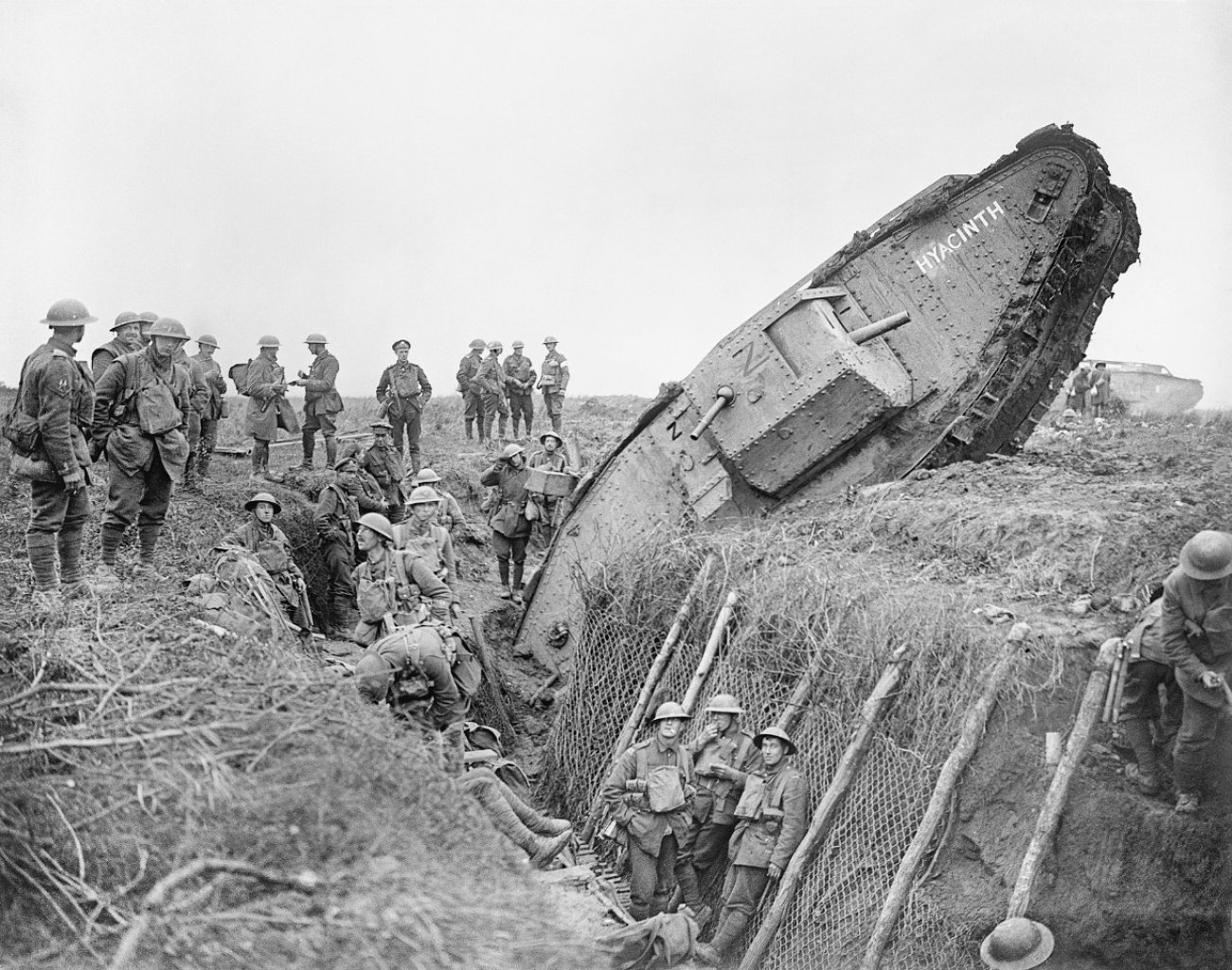 Massed armor, short, surprise artillery barrages and air support. It was an early form of blitzkrieg.

Here's What You Need To Remember: It wasn't the first time that tanks had seen combat. The dismal British offensive at the Somme in July 1916 had seen the advent of the newfangled "landships." They were designed to break the deadlock of trench warfare by knocking down the barbed wire and knocking out the machine gun nests before the infantry they supported could be massacred. But it was the first tank offensive.

At dawn on November 20, 1917, it was business as usual on the Western Front. Snug in their Hindenburg Line fortifications near the northern French city of Cambrai, three German divisions held a formidable maze of multiple trench lines, dugouts, machine guns nests and barbed wire.

Their plan was do what had worked for them so far. If the British troops opposite them attacked, they would be impaled on barbed wire or machine-gunned into oblivion. While the enemy struggled to regroup, the Germans would mass reserves for a quick, savage counterattack to retake any lost ground.

That had been the grim, futile script of the first half of the First World War, played out at Verdun, the Somme, Passchendaele and the other notorious bloodbaths of the Western Front. But this autumn morning would be different. Onward, on usual, trudged the British infantrymen grunting under their heavy packs as they crossed No Man's Land toward the German lines. But in front of them clanked hundreds of fire-spitting metal rhomboids deflecting machine gun bullets like Wonder Woman's bracelets.

It wasn't the first time that tanks had seen combat. The dismal British offensive at the Somme in July 1916 had seen the advent of the newfangled "landships." They were designed to break the deadlock of trench warfare by knocking down the barbed wire and knocking out the machine gun nests before the infantry they supported could be massacred. But at the Somme, a mere thirty-two Mark I tanks, unreliable and prone to breakdown, were neither enough to force a breakthrough or alarm the German high command. The Kaiser's resolute riflemen, backed by artillery, could handle a few clumsy metal monsters.

Recommended:  The F-22 Is Getting a New Job: Sniper

Not this time. Cambrai wasn't history's first tank attack. It was history's first tank offensive. The tanks would not be a mechanical freak show. Instead, they would be an integral part of the attack. Some 476 Mark IV tanks—including special tanks to function as armored resupply trucks—would be concentrated on a narrow front.

Nor was it just the use of armor that made Cambrai a first. Instead of weeks of preparatory artillery barrages that failed to kill the Germans in their underground dugouts—but did alert them that an offensive was coming—the assault would begin with a short barrage. The British had harnessed maps and mathematics to devise new predictive fire techniques that allowed the big guns to accurately shell their targets without first firing aiming shots to tip off the Germans that new batteries had arrived in their sector. Even airpower would be a factor, with the Royal Flying Corps providing low-altitude air support.

Massed armor, short, surprise artillery barrages and air support. It was an early form of blitzkrieg. To a veteran of Normandy 1944 or Desert Storm 1991, the tactics and technology of Cambrai might have seemed primitive, but not unfamiliar.

For their attack, the British assembled seven infantry divisions, three tank brigades, a thousand guns—and five cavalry divisions. That last part seems a bit of an anachronism and reflected a certain ambiguity in the British plans. Was this operation a full-scale breakthrough or just a raid? The tanks and infantry, backed by artillery, would aim for limited objectives: seize Bourlon ridge at the north end of the sector, cross the St. Quentin Canal in the south and repel the inevitable German counterattacks. Given past offensives against the Germans, that sort of shallow bite-and-hold attack was the best that could be achieved without taking heavy losses for little gain. But what if—just what if—every First World War general's dream came true, and there was a genuine, complete breakthrough? Then might not the cavalry, those dashing upper-class darlings made obsolete by those working-class machine gunners, burst through the breach and reach "the green fields beyond?"

For a moment, the prize seemed within reach. From the smoke and morning mist, the British tanks emerged to trample the barbed wire and pulverize the machine gun nests. There were the inevitable holdups, such as the 51st Scottish Highland Division's attack at Flesquieres, where German artillery ambushed their supporting tanks. Yet the German defenses had been breached.

"At first glance it had been a stunning success: three to four miles' penetration on a six-mile front at unprecedented speed," write historians Alexander Turner and Peter Dennis in their book Cambrai 1917: The Birth of Armored Warfare. “German reaction swung from incredulity to helpless despondency; that morning Rupprecht [the German commander] had considered ordering a general retirement.”

But it hadn't. Some objectives hadn't been captured, the assault troops were exhausted and the cavalry hadn't been exploited. After three years of trench deadlock, armies were unaccustomed to mobile warfare. Communications had also broken down, and so had nearly half the British armor. Though specialized anti-tank guns were not to make their debut until the next world war, ordinary German artillery pieces firing point-blank knocked out dozens of Mark IV tanks waddling across the battlefield at four miles per hour.

"In the minds of the [British] field commanders, it had fallen short of what needed to be achieved on the first day, write Turner and Dennis. "Now surprise had been lost they would be in a race against German reserves.”

Those fears were well-founded. With their customary efficiency, the Germans rushed seventeen divisions to the battlefield, including battalions of specially trained stosstruppen assault troops that would almost win the war for the Kaiser in 1918. Like the panzers of 1940, the stosstruppen infiltrated British lines, surrounding front-line units and overrunning command posts and artillery batteries. On November 30, the German counteroffensive swept forward, even reaching two miles beyond the British start line. Then the Germans, too, ran out of steam.

After the battle ended in early December, and both sides had suffered about 45,000 casualties each, the opposing lines ended up more or less as they had been two weeks before. Perhaps no more could have been expected. Even if the cavalry had exploited the breach, sooner or later human and horse flesh would have run into the ubiquitous German machine guns. The internal combustion engine had produced the tank, but in 1917, infantry moved on foot and supplies by wagons. And there were just a few hundred tanks. In the 1918 offensives that finally induced Imperial Germany to sue for peace, the Allies would deploy not hundreds but thousands.

But the wheel—or the tank track—would turn full circle. Some thirty-three years later, it would be the turn of the Germans to show how much they had learned. In 1940, it was the French who dispersed their tanks in small packets across the front. And it was the Germans who massed their armor to wage a blitzkrieg offensive that smashed a hole in the enemy defenses and compelled France to surrender in six weeks.

- Cambrai 1917: The Birth of Armored Warfare by Alexander Turner and Peter Dennis.

- A superb board game of the battle: To the Green Fields Beyond, designed by David Isby.

The rise and fall of Carlos Ghosn