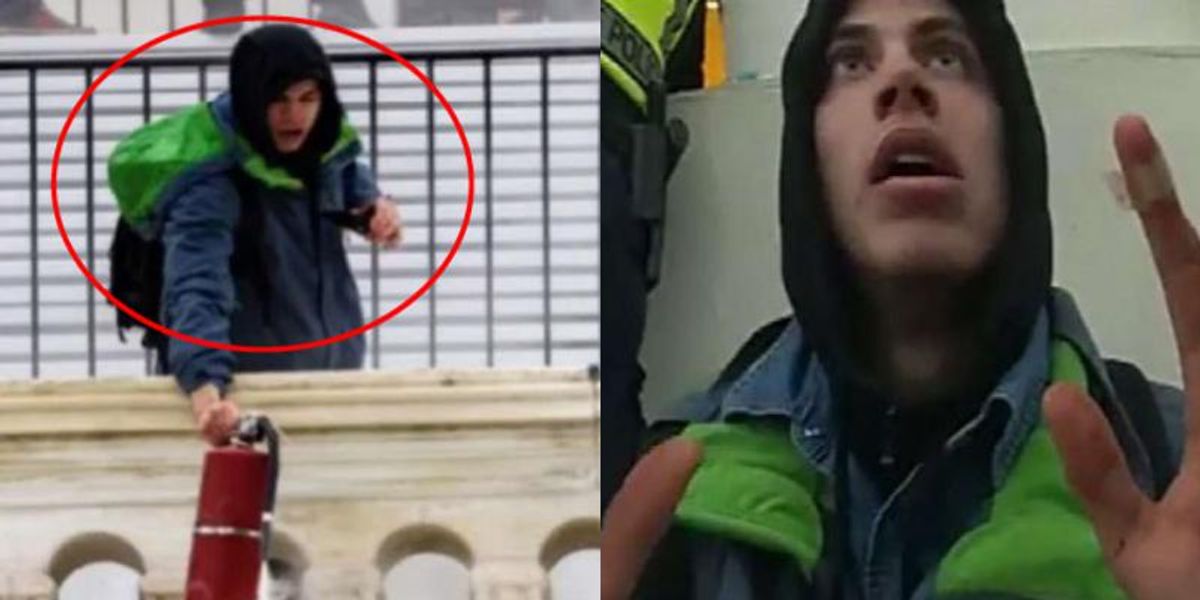 Nicholas James Brockhoff has been arrested by the FBI on charges of committing violence against officers protecting the U.S. Capitol on January 6 -- crimes more serious than most of the unlawful entry and trespassing charges issued to more than 450 rioters.

Brockhoff, 20, of Covington, KY, is accused of having attacked officers by spraying them with first extinguishers from scaffolding near the Lower West Terrace of the Capitol Building.

The FBI criminal complaint cited video in which Brockhoff is seen "discharging the contents of fire a fire extinguisher from the scaffolding…onto both MPD and USCP law enforcement officers who were standing beneath Brockhoff and attempting to hold back the rioters.

But based upon the report, it's when Brockhoff allegedly stole and donned an officer's helmet that law enforcement got especially testy. Here's the FBI report on what ensued:

"Brockhoff responds, 'I just found it on the ground.'"

In subsequent videos, however, officers ask Brockhoff his identity -- which he provides accurately -- and then notice he has injuries.

"A second MPD officer asks, 'Are you injured?

"'Are you injured from MPD or climbing through the window?'"

In other images, Brockhoff is seen wearing an MPD helmet "making a forced entry into…a Republican Conference Room, of the U.S. Capitol. Brockhoff can be observed directing other individuals on the best method to make entry into the room."

In addition to unlawful and violent entry and disorderly conduct charges facing almost all of the Capitol rioters, Brockhoff is charged with "assaulting, resisting or impeding" officers, "use of a deadly or dangerous weapon" and engaging an act of physical violence" on the grounds of the Capitol

You can read the FBI report here.

People are regretting buying a home due to high maintenance costs, but a home warranty can save you money