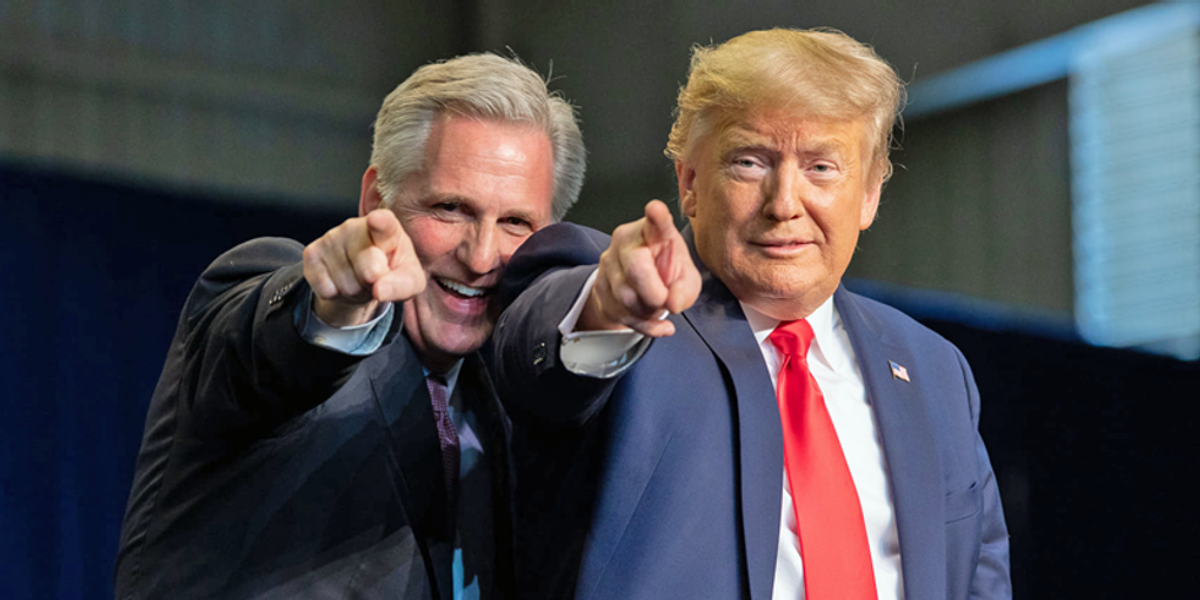 Republicans have made a political decision to back Donald Trump despite the insurrection he incited — and conservative Washington Post columnist Jennifer Rubin says it's not working.

"Republicans have adopted a three-pronged strategy to oppose President Biden and his agenda: Distraction (Oh, look, Dr. Seuss!), demonization (Socialism!) and denial (White House staff is really in charge, not Biden!). Republicans, as Senate Minority Leader Mitch McConnell (R-Ky.) let on, are '100 percent' invested in stopping Biden, whether it is his American Rescue Plan, his negotiated end to the 11-day Israeli-Hamas conflict (too fast, or maybe too slow!), his sanctions against Russia (not enough!), his selection of qualified women of color for top Justice Department jobs, the Jan. 6 commission, voting reform, forcing corporations to pay more taxes, or his infrastructure plan (even after Biden reduced it to $1.7 trillion). It does not seem to matter how popular an initiative is; whatever it is, Republicans are against it," Rubin wrote.

"Meanwhile, Republicans have moved from the 'big lie' that the election was stolen to a big voter-suppression crusade to big and farcical recounts," she noted. "So how is all that working out for Republicans? Not all that well. In the most recent Quinnipiac poll, for example, Democrats lead Republicans in the 2022 generic congressional poll by a healthy 9 points. In the most recent Morning Consult-Politico poll, Republicans in Congress have a net favorability rating of -19 (35 percent favorable vs. 54 percent unfavorable); Democrats have a +2 net favorability (47 percent favorable vs. 45 percent unfavorable). Meanwhile, FiveThirtyEight's poll average gives Biden a +14 net approval."

And the GOP's voter suppression schemes may backfire.

"Republicans choose to seek solace in voter suppression schemes, which will not necessarily benefit them. (As the Associated Press reported, these legislative gambits might deter rural and elderly voters, part of the GOP's base, from voting while they enrage and mobilize the Democratic base,)" she explained.

The GOP's decisions are making it harder for them to win elections.

"Most of all, elected Republicans, like their supporters, increasingly reside in a right-wing media bubble, which helps confirm their beliefs that the country is outraged by a socialist agenda and in a frenzy about cultural and racial memes. Living in a right-wing world of make-believe might be emotionally gratifying, but it does not prepare the party to win elections in the real world," Rubin noted. "Republicans' rhetoric might be odious, their assault on democracy irresponsible and their political thinking delusional. But Republicans' approach might also be entirely counterproductive. So far, the poll data shows they are doing a bang-up job of alienating everyone but MAGA cultists. That's no way to win elections."