Living with an infestation of rats, cockroaches and bees was already hard enough for Harry Pugliese and his family.

So when their ceiling collapsed after months of leaking, imagine their horror as they discovered snakes were also living among them.

Harry says he told his landlord, John Stafford, about the leaky roof back in February, one month after moving in with his wife Susan and his 13-year-old stepdaughter.

He says he never came to fix it, and months later when the ceiling caved in, at least four rat snakes were revealed to be living inside it.

Animal Control told the family they’d need permission from the landlord to take the roof down and remove the reptiles.

But still, he still Mr Stafford ‘didn’t want to do nothing about it’, according to Harry, even though the family were already dealing with a number of other infestations.

To make matters worse, the landlord then served Harry an eviction notice on Wednesday, giving just one week to move out of the home in Lafayette, Georgia, USA. 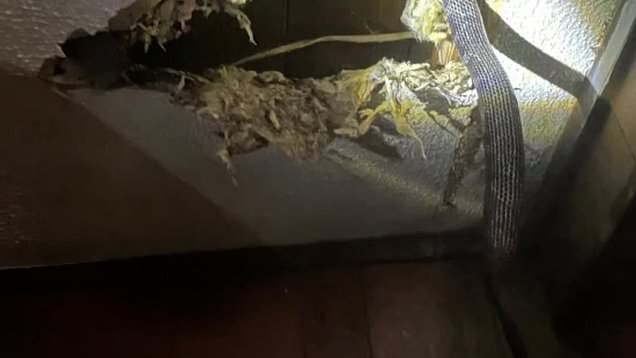 Mr Stafford told WTVC that the family never told him about the rats, cockroaches or bees and claims he sent someone to fix the roof two months ago.

But Harry said the work carried out was just a sticking plaster and says he called the landlord ’20, 30, 40 times’ since them to tell them there was still a leak.

In the end, he resorted to hiring a roofer himself and says he told Mr Stafford he would not pay rent until the roof was fixed and the pests all removed.

Harry added: ‘I was trying to be nice and help him out, and he backstabbed me.’

However, the landlord insists that rent cannot be withheld due to maintenance problems.

While they still have until June 2 to move out, the family plan to stay with Susan’s brother as they can no longer sleep in the infested home.

Harry added: ‘I’m dreaming that a snake is going to fall on me. I can’t sleep. I couldn’t sleep last night because of the snakes.’

Fortunately the family haven’t been stung yet by the honeybees infesting their walls.

An exterminator told them the wall would have to be removed to deal with the issue and Harry says the landlord didn’t want to do that.

He even says that Mr Stafford warned them of rats before they moved in and said they would have to lay traps and poison themselves.

Susan added: ‘He acts like he doesn’t care. He said “Well, if there are snakes in the ceiling, they’ll be taking care of the rats”.’

When asked by WTVC if he knew about rodents, Stafford said he had ‘never heard that’.

When pressed on the bees, he said ‘I would hate to disturb the bees, because it’s getting hard to even raise bees. Bees are becoming extinct and that is a strong hive.’

He then hung up on the station’s reporter when she asked when the home was last inspected.

He also put the phone down on DailyMail.com, saying: ‘I think the videos speak for themselves’.