Tory MP Rob Roberts has been suspended from the Commons for six weeks after he made ‘repeated unwanted sexual advances’ to a member of staff.

The House of Commons today approved a motion to suspend the disgraced MP after he was found to have breached Parliament’s sexual misconduct rules.

Mr Roberts was stripped of the Tory whip after The Independent Expert Panel (IEP) found that he abused his position of authority and made numerous unwanted advances towards the man.

The way recall laws are drawn up means Mr Roberts cannot face the prospect of losing his seat, due to a loophole that Commons Leader Jacob Rees-Mogg said the government is looking into.

Shadow Commons Leader Thangam Debbonaire offered to work with Mr Rees-Mogg to ‘urgently’ close the loophole because ‘process should not be a shield for unacceptable behaviour’.

She said: ‘In what other job could someone who has carried out sexual misconduct not face losing that job?’

The IEP’s report, published on Tuesday, said a complaint was made against the MP for Delyn, in Flintshire, Wales, on June 12 last year. 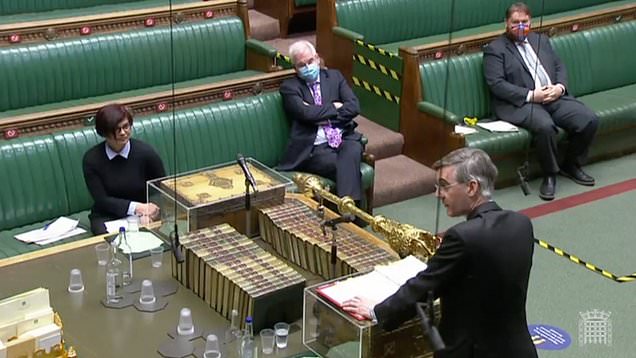 It said Mr Roberts had also made ‘inappropriate comments of a sexual nature and was overly intrusive about his personal life’.

The anonymous staffer told BBC Wales the pair were alone in a car together on a constituency visit when Mr Roberts said: ‘I find you very attractive and alluring and I need you to make attempts to be less alluring in the office because it’s becoming very difficult for me.’

He further alleged the MP harassed him repeatedly, made sexual jokes and displayed jealous behaviour.

The disgraced MP insisted his actions were ‘romantic’ rather than sexual but apologised and said the ‘breach of trust’ was ‘completely improper and should not have happened’.

Mr Rees-Mogg told the Commons that the ‘honourable’ thing for Mr Roberts to do would be to resign.

He said the government is looking at dealing with a loophole which prevents constituents of Mr Roberts from forcing a by-election.

Key people were off skiing and Boris on holiday as pandemic began, Cummings says

The Recall of Parliament Act only allows a by-election for sanctions imposed on the recommendation of the Commons Committee on Standards.

Mr Rees-Mogg told MPs: ‘We need to look at whether the process is striking the right balance between the defendants, protecting the confidentiality of the complainants, and in ensuring consistent outcomes across different types of conduct case.’

Sir Stephen Irwin, chairperson of the IEP, said it was evident that the MP was in a ‘very powerful position as an employer’ in relation to the staffer.

He said at the time of publishing the report: ‘The misconduct demonstrated here was significant…

‘Our conclusion is that the determination of six weeks suspension from the service of the House was proper and proportionate.’