Prince Charles joked that he would like to visit every Prince of Wales pub in the UK as he enjoyed a post-lockdown pint on a trip to Clapham.

The heir to the throne and wife Camilla were in were in good spirits during a tour of the south London high street earlier today.

They popped into a barbers and visited a Michelin-starred restaurant as they celebrated the re-opening of the economy now Covid infections have eased.

Despite a torrid first half of the year for the royals, Charles looked like he was enjoying himself.

He laughed out loud as he tried to sip his beer through his facemask while he told the landlord that he’d ‘always thought it would be rather fun’ to go around a visit every Prince of Wales pub, adding: ‘hopefully I’d get a free drink in each one.’

The latest records show there are 158 pubs named after the Prince of Wales in the UK.

Charles and Camilla admired the eclectic decorations inside the pub, pointing out a Toby jug of the Duke of Edinburgh, which the landlord, Dermot Connell, did not realise he had among his collection.

It was the latest sign that royal visits are slowly getting back to normal post-lockdown after the couple mingled with the public in Northern Ireland last week. 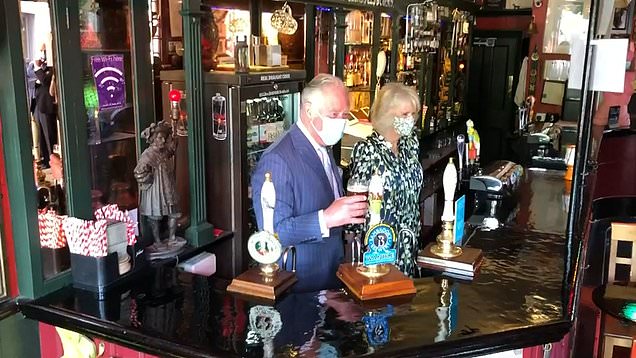 The visit came the day before Charles’ son Prince Harry is set to appear in the second part of his AppleTV+ series with US chatshow host Oprah Winfrey.

Last week Harry accused accused his father of making him ‘suffer’ as a child in the show, titled ‘The Me You Can’t See.’

Charles was said to be deeply hurt by the latest allegations, with Harry saying he and wife Meghan felt ‘trapped’ in the family and were left with ‘no option but to leave.’

The latest episode, which airs on Friday, will see Harry and Oprah ‘go deeper’ and discuss mental health issues as part of a town hall discussion.

Any worries Charles may have about what further revelations are coming were not evident as he enjoyed the sunshine in Clapham.

The couple also met Omnibus Theatre staff before walking down the hill, passing a range of independent shops and businesses.

By the time they ended their walk at Clapham fire station, where they greeted firefighters and thanked them for their service, a crowd of onlookers had gathered, hoping to get a glimpse of the royal visitors.

The couple’s visit was to celebrate the High Street as figures from the British Independent Retailers Association (Bira) show that a fifth of independents did not reopen after the first lockdown.

Figures show that footfall is still down 25% on the same pre-pandemic period in April 2019, despite lockdown restrictions being lifted.