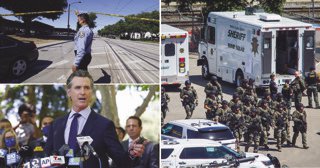 Nine victims in the San Jose rail yard mass shooting on Wednesday morning and the gunman, a maintenance worker at the facility, have been identified.

California authorities named Samuel James Cassidy, 57, as the suspect in the mass shooting at the Santa Clara Valley Transportation Authority as his co-workers were preparing to start the system’s service. As sheriff’s deputies approached Cassidy, he turned the gun on himself.

San Jose County employee James Kostmayer, who works in the building where victims’ families were waiting for word on their loved ones, said he heard the ‘heartbreaking’ reactions from an elevator.

‘You could hear the screams and cries of the families,’ said Kostmayer, according to The New York Times. ‘A mother screaming, “My son, my son.”‘

Some of the families have spoken about the victims on social media or to the news media.

Rudometkin was a San Jose native who was active in the VTA union. He ‘loved his job and just always stood up for everyone’s rights’, his cousin Christina Gonzalez told the Washington Post.

Lane was a journeyman lineman operating outdoor electrical equipment for the VTA, according to his LinkedIn profile. His brother Ed Lane criticized the family notification process, saying, ‘politicians and law enforcement patting themselves on the back leaving my family in the dark for 12 hours’.

Singh was a light rail operator for the VTA for about eight years who moved from India to the US in 2005. He had a wife and two young children and could ‘work anything he wants, very smart guy’, his cousin Bagga Singh said.

Megia was Taptejdeep Singh’s supervisor and told employees to seek shelter amid the bullets, according to the Mercury News. Megia’s friend Melissa Santos Poquiz said he was ‘a ray of sunshine’ and called the shooting a ‘senseless act and massacre’.

The gunman’s ex-girlfriend, neighbor and court records showed he lived alone in a suburban area southeast of downtown San Jose and had a hostile demeanor. Jingkun Wang, who dated Cassidy for a year, said he had ‘major mood swings due to bipolar disorder’ and claimed he forced himself on her sexually.

Cassidy’s neighbor across the street, Doug Suh, said he and his wife were ‘afraid of him’ and that they ‘never saw any friends or family’ visiting him.

Cassidy was married for 10 years and got divorced in 2004, according to family records.

California Governor Gavin Newsom on Wednesday condemned the ‘rinse and repeat’ cycle of mass shootings, which number 68 in the past two months, according to the Gun Violence Archive.

‘It begs the damn question, what the hell is going on in the United States of America?’ Newsom said. ‘What the hell is wrong with us, and when are we going to come to grips with this?’