JAKE PAUL has been called out by 0-14 boxer Andy Bishop after the journeyman claimed the YouTuber ‘stole food from his daughter’s mouth’.

Reports emerged this month that the winless fighter was set to be the opponent for a televised clash with Tommy Fury – claims denied by the star’s Queensberry Promotion management.

However, Fury was mocked by bitter rival Paul for the calibre of his opponent when Bishop’s name was mentioned and there was a public backlash.

That led to the fighter from Milnrow in Lancashire – who has just become a dad to a little girl – claiming he was snubbed by Frank Warren’s Queensbury looked for another opponent instead.

That is another claim denied by Queensberry, but Bishop exclusively told Sun Sport: “Jake Paul is an absolute clown and I’ve actually messaged him this morning on Instagram.

“He is the reason why I am no longer fighting Tommy – that’s what I believe.

“He’s not going to reply to me but I’ve told him what I thought.”

But he could face a much trickier test if winless Bishop, from Northside Boxing Club, gets his hands on him.

Bishop added: “The lads he has fought… I believe Askren had just had hip surgery and was obviously not fit to get in the ring and to me it looked like he was hit with the shot and that he twisted and went with the momentum. 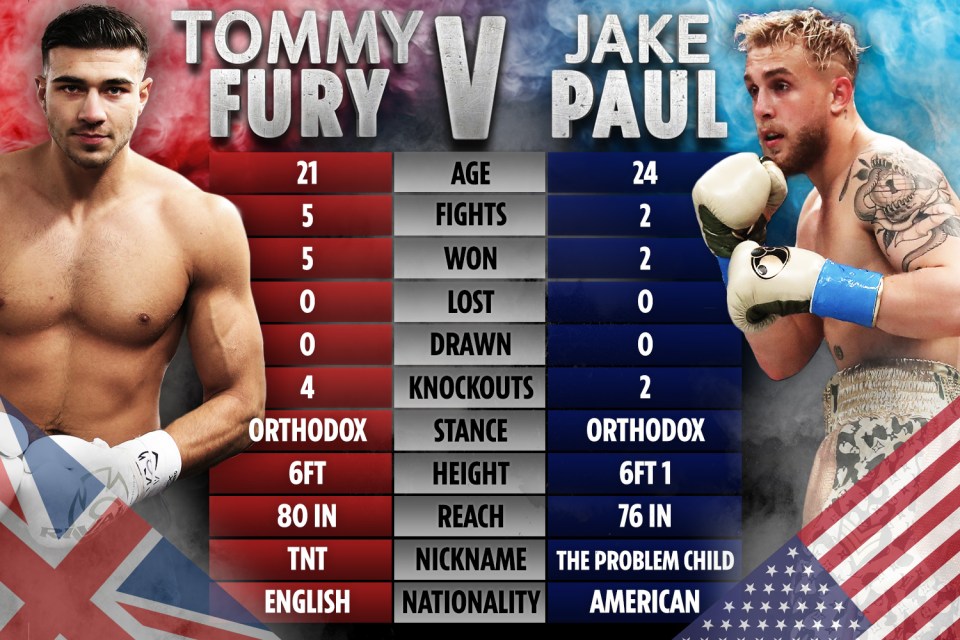 “It was more like WWE to me and a staged performance but there’s millions of quid involved in it.”

Bishop, who is a plant mechanic, says he is dreaming about what he would like to do to Paul.

He added: “I would love to let my hands go on his head and that’s something I’ve mentioned to him this morning.

“I wouldn’t be in it for the money. He could come down to Northside any day of the week and I’d love to do some rounds with Jake Paul.

“He took food off my daughter’s table. I’m in the boxing game for the money. I’ve just paid £520 for the medical and I’m far from flush.

“I could have done with money in my bank but I’ve only done it for the big fight, which could have had a knock-on after that and got a few more fights with rising stars.

“That lad is only in it for one thing and that’s for the big money – obviously I don’t bring that.

“I’d do it for nothing, I don’t want any money, I’d just be happy to spar or if we could have a contest that would be even better.

Jake Paul knocked out Ben Askren in his last fight[/caption]

“But the chances of that happening are highly unlikely – but it would make me feel better to take out my anger over what has happened with the Tommy fight.”

Tommy Fury, the 22-year-old younger brother of WBC heavyweight champion Tyson Fury is attempting to forge an impressive career in the ring of his own.

He is currently 5-0 and is now hoping to stretch that to six when he returns to the ring on June 5.

A spokesperson for Frank Warren’s Queensberry Promotions said: “Mr Bishop was never once considered as an opponent for Tommy Fury by Frank Warren or Queensberry.

“No one at Queensberry, or on behalf of Queensberry, has ever approached Mr Bishop or anyone connected to Mr Bishop about fighting on any of our forthcoming promotions.

“Any suggestion otherwise is an outright falsehood. Mr Bishop’s manager will confirm this to be the case.

“Queensberry have the exclusive rights to promote Tommy Fury and match his bouts.”

I’m a mum-of-seven at 24 including THREE sets of twins so I got my tubes tied, people troll me for being a young mum