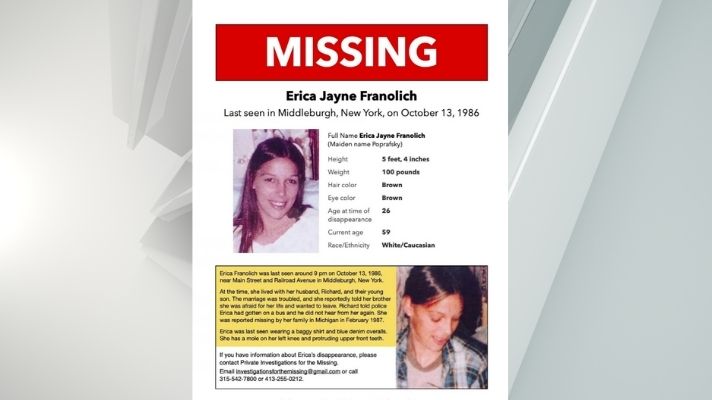 MIDDLEBURGH, N.Y. (NEWS10) — The search is still on 35 years later after Erica Jayne Franolich disappeared out of Schoharie County.

There have been several reports out that the 26-year-old was last seen on October of 1986 at a bar near Main Street and Railroad Ave in Middleburgh. However, some investigators and family know that wasn’t the last place Erica was seen. “She was actually last known to be at their home…the Franolich home,” says Greg Overacker, Private Investigator for Private Investigations for the Missing.

Erica Franolich lived with her son and her husband, Richard, in Schoharie County. Erica’s older sister Nada Thomspon says Erica was in a troubled marriage. The couple was involved with alcohol, drugs, and physical abuse. At the time, Erica’s family was living in Michigan and reported her missing after they had trouble getting in touch with her. The family wasn't able to file a missing persons report until they came to New York in February.

A few years after Erica’s disappearance, Richard moved to Vermont with their son.

“I want to see justice for Erica, for Erica’s family and for her sons, Christopher and Rickie,” says Erica's older sister Nada. Nada is asking for answers after she said her sister’s case went dark for nearly three decades. “If it wasn’t for the private investigators for the missing — they got to pick a cold case, and they happened to pick my sisters,” Nada adds.

Greg Overacker is a Private Investigator for Private Investigations for the Missing, a non profit organization that provides investigative services for loved ones of missing people. Overacker says there are new leads to this 35-year-old case that he can’t discuss. He has been working with State Police and with Erica's family.

Recently, this case has gained local attention. Between blog posts, podcasts and two billboards in Cobleskill, Greg and others are trying to spread the word. The billboards were put up on Tuesday and will be up for a month. They will remind the community that Erica is still missing. “There are people in the area that have information and we need them to come forward,” says Greg.

Greg says donations made the billboards possible. “...We’re trying to reach as many people as possible because we know these people are out there.”