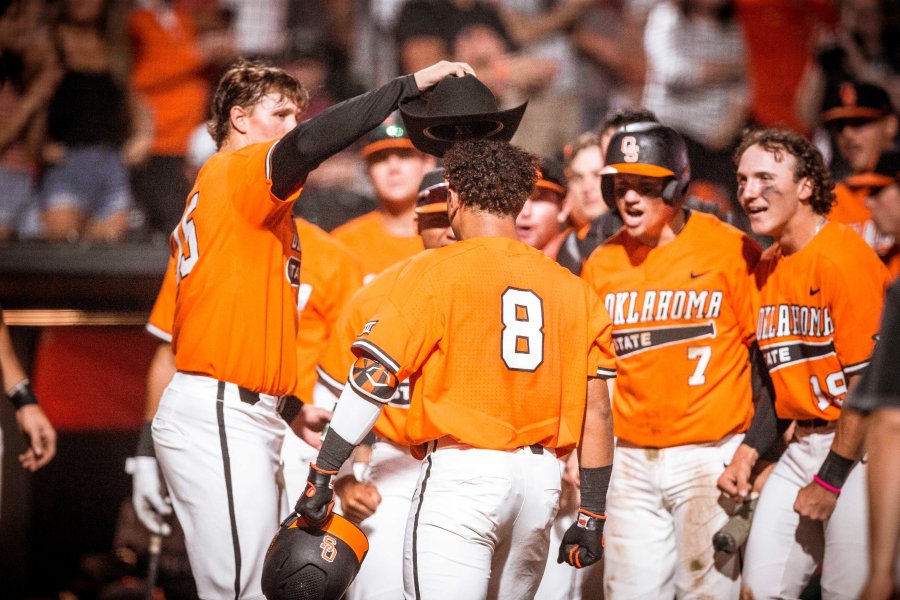 Oklahoma State's baseball team got excellent pitching from starter Justin Campbell and reliever Colton Bowman and held Oklahoma scoreless through eight innings on their way to a 9-5 win over the Sooners in the first round of the Big 12 Tournament at the Bricktown Ballpark late Wednesday night.

Campbell went six innings, striking out seven and giving up just three hits and no runs.

Bowman was solid for two and a two-thirds innings, striking out four, but also walking three and throwing a wild pitch that allowed a run to score to break up the shutout.

Roman Phansalkar came on in relief of Bowman with two outs, but walked in two runs to make it 9-3.

Phansalkar was replaced by Kale Davis, who gave up a single up the middle to Peyton Graham to score Brandon Zaragoza and Breydon Daniel to make it 9-5.

Davis then struck out Jimmy Crooks to end the game.

The Cowboys didn't waste any time getting their offense going, as their first hitter of the game, Caeden Trenkle belted a solo home run to center field to make it 1-0.

OU starting pitcher Jason Ruffcorn settled down after that, but then in the fourth inning gave up a solo home run to Matt Golda to give the Cowboys a 2-0 lead.

OSU then knocked Ruffcorn out in the fifth inning as they scored four runs.

Marcus Brown singled in Christian Encarnacion-Strand to make it 3-0, then with the bases loaded, Ruffcorn hit Brock Mathis to score Jake Thompson and it was 4-0.

Golda grounded out to score Cade Cabbiness, then Trenkle reached on an infield single to score Brown and it was 6-0 Cowboys.

OSU added to the lead in the seventh inning with three more runs.

With one out and the bases loaded, Trenkle hit what appeared to be a sure double play ball to Conor McKenna at second base, but he couldn't get the ball out of his glove in time to get the runner at second base and Brown scored to make it 7-0 OSU.

Ledgend Smith then walked Max Hewitt to score Mathis to make it 8-0 Cowboys.

Encarnacion-Strand flied out to right field on a sac fly to score Golda to make it 9-0 OSU.

OU avoided the shutout in the 9th, as Jimmy Crooks scored from third base on a wild pitch by Bowman.

OSU has won four of the six meetings this season against OU, 15 of the last 18 overall, and four straight in the Big 12 Tournament.

Macron to Joe Biden: “What We Need is Cooperation – I Think It’s Great to Have a US President Who is Part of the Club” – Biden Nods in Agreement (VIDEO)

Copa America 2021 FREE: How to watch every Brazil, Argentina and Colombia game without paying a penny