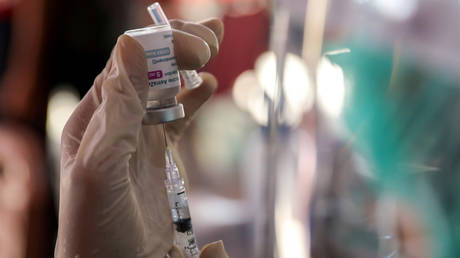 Indonesia’s consumer watchdog has greenlit the use of an AstraZeneca vaccine batch which was suspended earlier this month after a man died shortly after receiving a shot. No link between his death and the vaccine was found.

The massive batch of coronavirus vaccines from British-Swedish company AstraZeneca was put back into use by Indonesia’s authorities on Thursday. Known under the designation ‘CTMAV547’, it contains 448,480 doses of the vaccine.

“According to test results, it can be concluded that there was no relation between the quality of COVID-19 vaccine batch number CTMAV547 with the post immunization event reported,” the Indonesian Food and Drug Authority (BPOM) said in a statement.

“For this reason, use of the AstraZeneca Covid-19 Vaccine batch number CTMAV 547 can be resumed.”

The batch was referred to the consumer watchdog earlier this month after a 22-year-old man died a day after receiving a shot originating from CTMAV547. Vaccines from the batch were sent for further “sterility and toxicity” tests, to make sure it was not behind the man’s death. The detailed report on the batch published on Wednesday says the vaccine did not display abnormal toxicity or have issues with sterility, and was deemed perfectly fit for use.

Before the incident, vaccines from the batch were distributed to people in the country’s military, as well as in the capital, Jakarta. No major incidents linked to its use were reported before the death in mid-May.

Indonesia has widely used the AstraZeneca shot in its mass vaccination drive, receiving around 4 million doses under the COVAX program, which is backed by the World Health Organization (WHO). Since the beginning of the pandemic, the country has registered nearly 1.8 million cases of Covid-19, with more than 49,700 people succumbing to the disease.