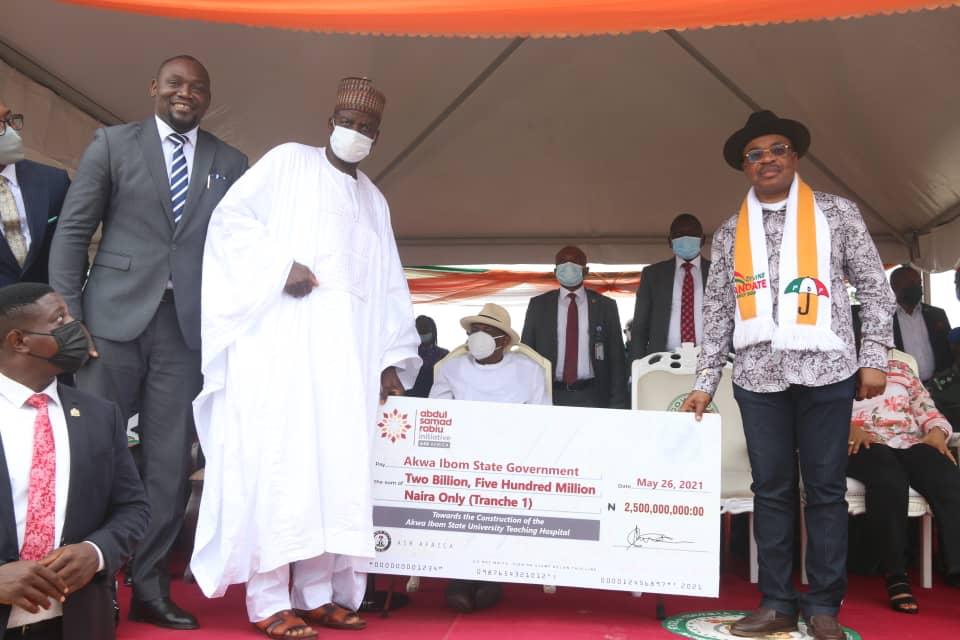 In fulfilment of his campaign promise to change the narrative of the state from a civil service state to an industrial hub within the Gulf of Guinea, Akwa Ibom State Governor, Mr Udom Emmanuel on Wednesday, performed the groundbreaking ceremony for the multi-billion dollar Petrochemical and fertilizer company, Sterling Petro-Chemicals and Fertilizer Production Factory, in Eastern Obolo LGA.

The project is between the Akwa Ibom State Government and SPFL Developers for the purpose of setting up the Petrochemical and Fertilizer Production Factory, in line with the Federal Government National Gas Expansion Programme (NGEP).

The flag-off of the project which commenced with a ground-breaking ceremony was jointly performed by the Akwa Ibom state governor and his Rivers State counterpart, Nyesom Wike CON, at the project site which spans the four communities of Okoroinyong, Obianga, Egwenwe and Ikonta in Eastern Obolo Local Government Area.

Addressing the gathering, Governor Udom Emmanuel reiterated his administration’s determination to turn the swamps of Eastern Obolo into an industrial hub, stating that this underscores his commitment to rural and riverine areas development, as a critical component of his administration’s 8-point agenda.

“When we were campaigning for our second term in office, we said we were going to give a lot of attention to the rural and riverine areas that have been cut off in the past and that are what we are doing here”, Governor Emmanuel stated.

He said the factory, among other projects, was strategically sited within the span of the Liberty Oil and Gas Free zone area, as part of a state government plan for a sustainable economy.

Governor Emmanuel assured that his administration will complete the construction of the road linking the Local Government Secretariat to the Palace of the paramount ruler of Eastern Obolo which, he said, will be the first major road construction project in the area by the state government and urged youth of the area to channel any issue involving the project to his office and do well to support the contractors to succeed, assuring them of inclusion in the state government plan for a special capacity building programme to equip locals with required skills to function at various levels of the project.

Also, the foundation stone for the construction of the Akwa Ibom State University Teaching Hospital, situated within the premises of the General Hospital, Onna, was also laid. The Hospital project is a product of a partnership deal with BUA Group who announced the first tranche support of N2.5bn towards the project. Already, the Governor has already attracted aid to the tune of #5.7 billion in support of the project.

Unveiling the road project, Rivers State Chief Executive said that he was amazed that the Governor has so many projects to showcase in just a day, nothing with delight that his legacy projects would create more employment opportunities for Akwa Ibom people.

Speaking at the occasion, Governor Nyesome Wike of Rivers State, commended Governor Udom Emmanuel for his foresight in initiating projects that would boost the Akwa Ibom economy in all spheres, affirming that the petrochemical and fertilizer production projects would create employment and other economic opportunities for the people of the state.

On the local content principle, Governor Wike urged the contractors, SPFL Developers and the investors, Giwa Gas to engage people of the state in the course of executing the project for smooth processes, maintaining that it is the enemies of people Niger Delta that is peddling the propaganda that the region is not safe.

On his part, the Chief Executive Officer of Sterling Petrochemical and Fertilizers Limited, Mr Deepak Barot, described the project as a milestone in the economic development and prosperity of Akwa Ibom State and Nigeria, as it will open a new gateway of opportunities in the oil and gas industry, while also significantly reducing the harmful environmental effects of gas flaring.

He said the project will optimize the use of by-products of oil fields in the petrochemical, fertilizer, polymers plants in future and in the long run minimize the import dependency, save forex and increase earnings by exporting the products to different parts of the world, upon completion, will be the biggest success story in West Africa.

Performing the inauguration of the road projects on Tuesday at Oron Local Government, the Governor assured the Oro people that he remains focused on completing all projects initiated during his administration before 2023.

In his words, “I am standing here today to renew my social contract and promises to the entire Oro nation, we will not leave the office until we complete all our promises. Today, we are commissioning Oron Road, Customs Road, Market Square Road, Murtala Road, with 2km Outfall Drains, the remaining projects will be commissioned in the next phase”.

He announced that Akwa Ibom State Government is set to Partner with Norfin Shipyard, a Private Shipping Company to commence ferry service from Oron through Calabar, stating that the partnership will boost the economic activities of the people in the area.

“I also want to reassure you we are in partnership with a private sector, the CEO Norfin Shipyards we will begin that Ferry Service between Oron and Calabar, I want to assure the CEO Norton Shipyard that the State Government will give him all the necessary support especially in the area of security, so let him come and start the Ferry Service with a very large yacht from here to Calabar and then with that the economic activities will open up”, he stated.

The Governor assured Oro people of the State Government’s partnership with the Police to provide marine security along the waterways so as to encourage safety and enable commercial activities, maintaining that with the visit of Deputy Inspector General of Police to kick-start the ‘Operation Restore Peace’ in the South-South region, our waterways will be safe.

He however dispelled rumours circulating in the social media of his purported defection to All Progressive Congress (APC), calling on Akwa Ibom People to discountenance such statements as they were a mere figment of imagination sponsored by detractors to create confusion.

“I have heard that in social media they are lobbying that the governor should come to another party, Akwa Ibom is PDP, and PDP is Akwa Ibom, I think a word is enough for the wise”.

The governor thanked the contractor Wizchino Engineering for a thorough job, and the Oro people for their support to make the project a reality and urged them to continue the same gesture in the next phase of projects in the area.

What is metadata? Understanding the type of data that describes data sets and determines much of what you see online