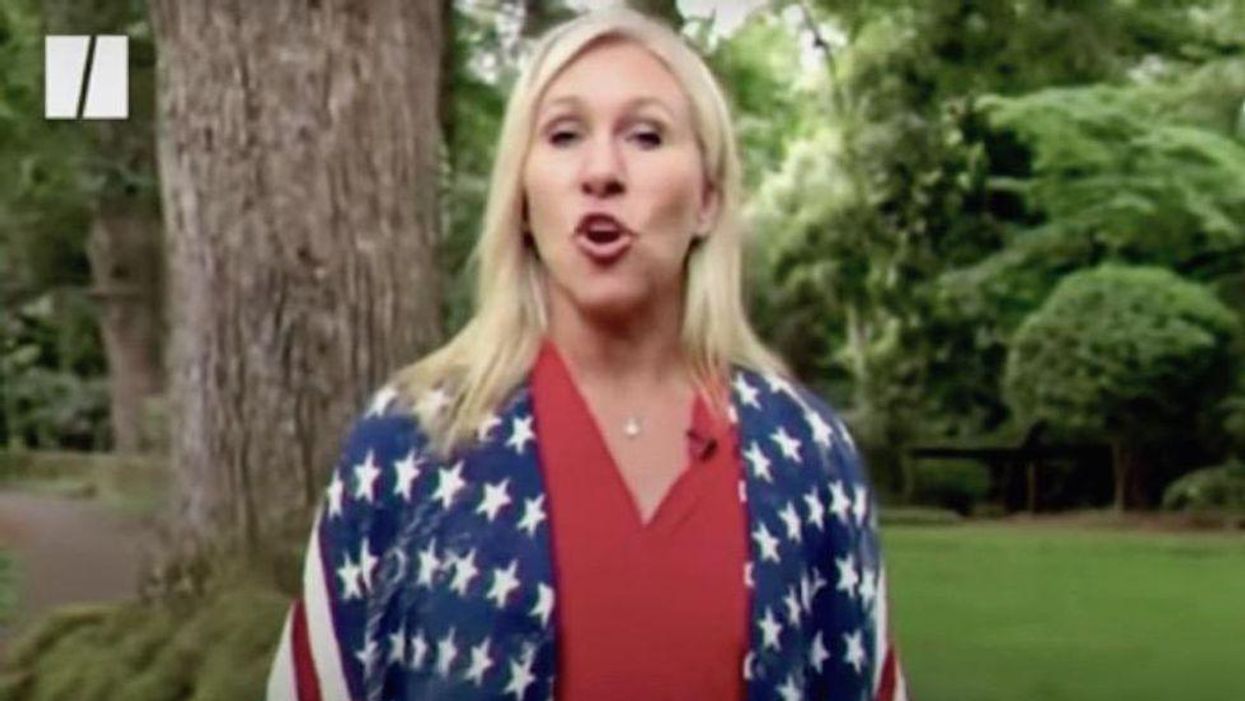 Georgia Republican Congresswoman Marjorie Taylor Greene apparently believes House Minority Leader Kevin McCarthy should always defend her no matter how offensive — or politically damaging to the GOP — her antics may be.

One day after retweeting — then deleting — a post that called McCarthy "insane" and a "feckless c*nt" for condemning her recent rant comparing mask mandates to the Holocaust. Greene appeared Wednesday night on NewsMax to attack House GOP leaders who have dared to criticize her remarks.

After praising Greene as "the most famous Republican in the House of Representatives right now, more so than Kevin McCarthy," Newsmax host Greg Kelly asked about her most recent spate with party leaders.

"You have to have respect for [House Speaker] Nancy Pelosi, in that she never allows attacks on her own," Greene responded. "And she defends them even when they sleep with Chinese spies, when they attack Israel, when they stand with Hamas terrorism, and when their rhetoric is so disgusting that Antifa pro-Palestinian rioters are on the streets attacking American Jews.

"Nancy Pelosi stands with their own, and Kevin McCarthy never had to say a word," Greene added. "He could have said, 'You should ask Marjorie about her words and ask her what she has to say.' That would have been the right answer for him, so it's unfortunate that he took this route. And he didn't even text me or call me, which is really a shame, before I found out seeing it in the news that he had said that.

"And then sadly Elise Stefanik, our new GOP chair, followed suit of course right along, and then I think Steve Scalise and others," Greene said. "And they shouldn't have done that. None of them called me and asked me what I meant by what I said."

Greene went on to accuse the media of "twisting my words," before effectively doubling down on her comparison between mask mandates and Nazi Germany.

"It's terrible how people are being treated in this country about masks and about vaccine passports, and we have to stand up to these aggressions, and these are the exact types of aggressions that take away our freedoms, and we've seen it with tyrants in the past throughout history, and these are definitely countries that pursued the Socialist path, the same path that the Democrats are pursuing," she said.

Earlier Wednesday, Washington Post columnist Karen Tumulty weighed in on the relationship between Greene and House GOP leaders, comparing her to a "Frankenstein" that the GOP has created, and calling on them to expel this monster from their caucus.

"Anything less makes hollow Republican leaders' efforts to portray Greene as merely a fringe player among their ranks," Tumulty wrote. "They created her, and they continue to elevate her.

"This is the consequence of seeking power without regard to what else it may bring," Tumulty added. "To borrow the subtitle from Mary Shelley's famous novel, Marjorie Taylor Greene is the fruit of Republicans' own efforts to become the Modern Prometheus."