NINE people were killed after a gunman opened fire during a union meeting at a light rail yard on Wednesday 27, 2021.

The list of victims killed by Samuel Cassidy, 57, have since been named by the authorities.

Nine people were victims of the shooting in San Jose[/caption]

Who were the victims of the San Jose shooting?

In total, nine victims were killed in the shooting at a San Jose train yard.

Among them was Taptejdeep Singh, 42, whose family told reporters at the scene that his last moments of his life were spent being a hero.

Singh’s family were informed by colleagues that he pushed one co-worker into a room to protect her from the gunman, and then frantically called others  to warn them what was happening.

“He just saved her and then after that he go toward the downstairs,” said Singh’s cousin Bagga Singh. “We lost a good person, he’s a very good person.”

He was described as a “loving brother, husband, and grandfather.”

Father of two, Taptejdeep Singh, 42, was one of victims of the shooting[/caption]

Posting on Facebook, Peralez said: “My dad and I were just planning another golf day reunion with Mikey, and now that will never happen again.

“My family and I have lost a long time great friend and there are no words to describe the heartache we are feeling right now, especially for his family.”

Another was 40-year-old Michael Joseph Rudometkin[/caption]

The other victims were confirmed as:

A motive for the killings have still not been determined.

Where is the VTA railyard?

The VTA Railyard is a facility located near the Santa Clara County Sherriff’s Office at 1010 Younger Avenue.

It is described as a hub that stories multiple TA trans anda materinance yard.

The site is also close to San Jose International Airport.

The company reportedly has 2,100 employees, however it is unclear how many people were on-site at the time. 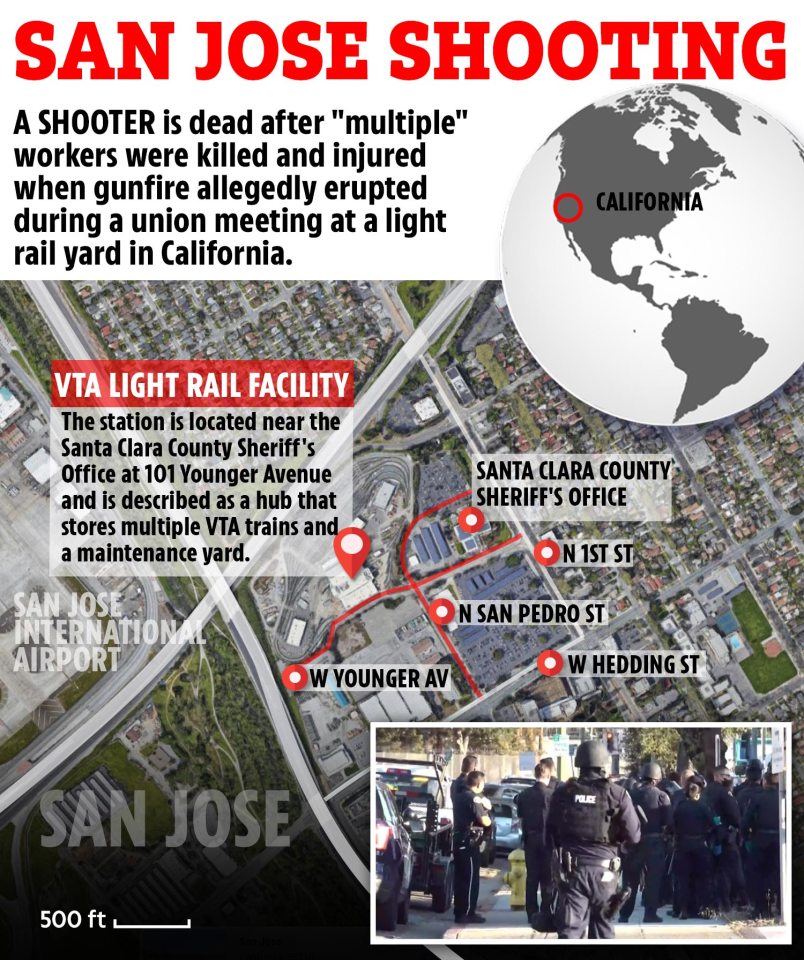 Did shooter Samuel Cassidy work at the VTA?

Samuel Cassidy, who shot himself after the incident, was a maintenance worker for VTA, police confirmed.

He allegedly “knew all of his victims well.”

He had worked there since at least 2012, having first arrived as a mechanic, according to the public payroll and pension database Transparent California.

The Canon City Daily Record reported that Cassidy had acquired a license to perform smog check inspections in 2003 and used to work at a San Jose Mazda dealership.

Samuel Cassidy was a maintenance worker for VTA, police confirmed[/caption]

The 57-year old was also confirmed as the owner of a house in the Ramblewood neighborhood of South San Jose, which caught fire after around the same time that the shooting took place.

Police later found a number of weapons inside the home with “hundreds of rounds of ammunition.”

However, they have not yet publicly linked the arson call to the shooting.

His father, 88-year-old James Cassidy, told The Daily Beast that his son “seemed completely himself” in the days leading up to the shooting.

Neighbor 'in tears' after finding body of 'kidnapped and slain' boy, 4

“He didn’t talk about his job or politics. I just found out he was dead and his house on fire and all that a minute ago,” he said.

“It’s really…. I really, really don’t want to… I guess I have to just kind of absorb it all myself. I don’t really have any information anyway, so… sorry.”

US Should Close the Door to Ukrainian Membership in NATO