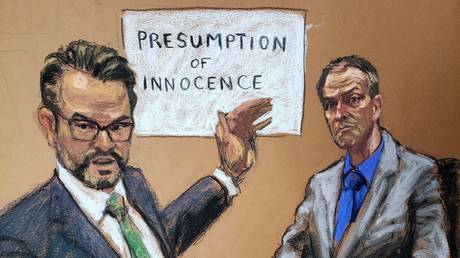 The prosecution and defense lawyers have made their closing arguments in the trial of former Minneapolis cop Derek Chauvin, with his legal team earning ridicule online for their “reasonable police officer” argument.

Chauvin’s trial has gripped the attention of activists in Minnesota, the state where the late George Floyd died in the custody of Chauvin, kicking off Black Lives Matter protests across the country. Tensions have heated up amid the ongoing Chauvin trial and the recent police-shooting death of Daunte Wright in Brooklyn Center, which is near Minneapolis.

In their closing arguments on Monday, Chauvin’s defense team argued their client was a “reasonable police officer” who used justifiable force during the arrest. Defense attorney Eric Nelson did admit that force was “unattractive," referencing the video shown to jurors of Chauvin's knee pushed into Floyd's neck for over eight minutes.

During the trial, video showed Floyd in police custody, handcuffed and pushed onto the ground by Chauvin, whose knee was putting pressure on Floyd’s neck for minutes on end. Experts on the defense side have testified that Floyd’s death was due to underlying health factors, while the prosecution has argued it was a direct result of Chauvin’s actions.

Nelson’s “reasonable police officer” comment almost immediately began trending on social media, with the attorney being blasted by critics for describing Chauvin in such a positive light.

If Chauvin did what a reasonable police officer would do then why is it his boss testified against him? Why is it no officer from his dept came to testify on his behalf?

A reasonable police officer would have knocked Derek Chauvin off of George Floyd's neck.

Derek Chauvin being a "reasonable police officer" isn't the defense you think it is.

“A reasonable police officer understands the intensity of the struggle,” Nelson said, after arguing Chauvin was informed before arriving on the scene that Floyd might be high on drugs.

Nelson was also mocked over another bit of his closing argument where he focused on the prosecution not fully making their case, comparing it to missing an ingredient while making cookies.

In another grab at explaining the bar for “reasonable doubt” in a criminal trial, Nelson went into an odd hypothetical about Chauvin’s body being “inhabited” by “space aliens” as an example of “fanciful” doubt, which also earned him plenty of ire.

He just used “space aliens flew in and inhibited the body of Derek Chauvin and caused the death” to illustrate an example capricious and fanciful doubt.

CNN was accused of joining in on the ridiculing of Chauvin’s defense team after a senior legal analyst, Laura Coates, summed up their remarks on Monday as: “Defense begins the closing by defining reasonable doubt, not with why #DerekChauvin is innocent. Think about that.”

“Oh my God,” journalist Glenn Greenwald tweeted in response, leading a wave of criticism against the network for showing their bias in the case so clearly.

I don't even know what to say.

You are literally CNN's "Senior Legal Analyst" and you actually wrote this tweet. I mean, I think Chauvin is guilty as hell, but how can you hold your position and know a thing about crimlaw and write this tweet? https://t.co/g4RofKqYj3

The prosecution made their closing remarks earlier on Monday, with attorney Steve Schleicher putting emphasis on the footage of Floyd’s final moments, arguing Chauvin “had to know” he was killing the man.

“Use your common sense. Believe your eyes. What you saw, you saw,” he told the jury.