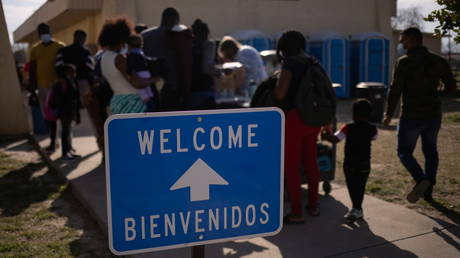 Arguing that President Joe Biden’s words aren’t the official position of his administration, the White House said his use of “crisis” was referring to something completely different and not the surge of migrants at the border.

During a game of golf and photo-op on Saturday, Biden told reporters he hadn’t raised the refugee admission cap because of “working on the crisis that ended up on the border with young people and we couldn't do two things at once,” in what seemed like a straightforward description of the situation at the US-Mexico border.

Except on Monday, unnamed White House officials speaking to CNN were trying to walk back the president’s words. “No, there is no change in position,” the anonymous official told CNN. “Children coming to our border seeking refuge from violence, economic hardships and other dire circumstances is not a crisis.”

Biden “was referring to the crisis in Central America – the dire circumstances so many are fleeing from. He was not referring to the Federal Government’s response,” CNN’s anonymous source maintained. This was then echoed by White House Press Secretary Jen Psaki on Monday afternoon.

“The president does not feel that children coming to our border seeking refuge from violence, economic hardships, and other dire circumstances is a crisis. He does feel that the crisis in Central America – the dire circumstances that many are fleeing from – that that is a situation we need to spend our time or effort on and we need to address it if we're going to prevent more of an influx of migrants from coming in years to come,” Psaki told reporters.

.@PressSec: "The president does not feel that children coming to our border seeking refuge from violence, economic hardships and other dire circumstances is a crisis."

Biden’s use of “crisis” threatened to undo months of his administration insisting on not using that particular word. Psaki declined to “put new labels on it” in February, and deflected questions on several more occasions. She later echoed a “challenge” label that Homeland Security Secretary Alejandro Mayorkas came up with. In a March 18 presser, Psaki actually said “crisis” before quickly backtracking and explaining she really meant “challenges.”

This obsession with terminology – and the efforts to explain away Biden’s own words – did not go unnoticed on the other side of the aisle. Congressman Andy Biggs (R-Arizona) tweeted that not only has Biden not visited the border, “his own administration is now walking back his own words.”

Day 26 and Biden has yet to visit the border. Even worse, his own administration is now walking back his own words.

The White House refuses to call the situation at the border what it is - a crisis.

Biden referred to “the crisis that ended up on the border” & now his administration claims that’s not the official position & “children coming to our border... is not a crisis.”

They need to stop gaslighting the American people.https://t.co/2rQ95fSkwi

Steve Guest, staffer for Senator Ted Cruz (R-Texas), called it “insane spin” and pointed out that, “According to the Biden White House, what Joe Biden says does not represent the official position of the Biden administration.”

“There is no President,” quipped actor Nick Searcy, a conservative. “[Joe Biden] is not in charge of his own mouth.”

There is no President. @joebiden is not in charge of his own mouth.

The most recent report by US Customs and Border Patrol (CBP) spoke of 172,000 “encounters” on the US-Mexico border in March alone, of which almost 19,000 were unaccompanied minors – a 71% and 100% increase over February, respectively.

Meanwhile, even as the White House and the Democrats were dead-set on avoiding the word “crisis” when it came to the border, they seem to have no trouble using the term for pushing the climate change agenda, including the Green New Deal.

At this time of unprecedented crisis, we must move forward to boldly address the systemic and existential threats facing us today and that includes combating climate change and making sure that every American has a safe and decent place to live. https://t.co/zwpTgo0oqE