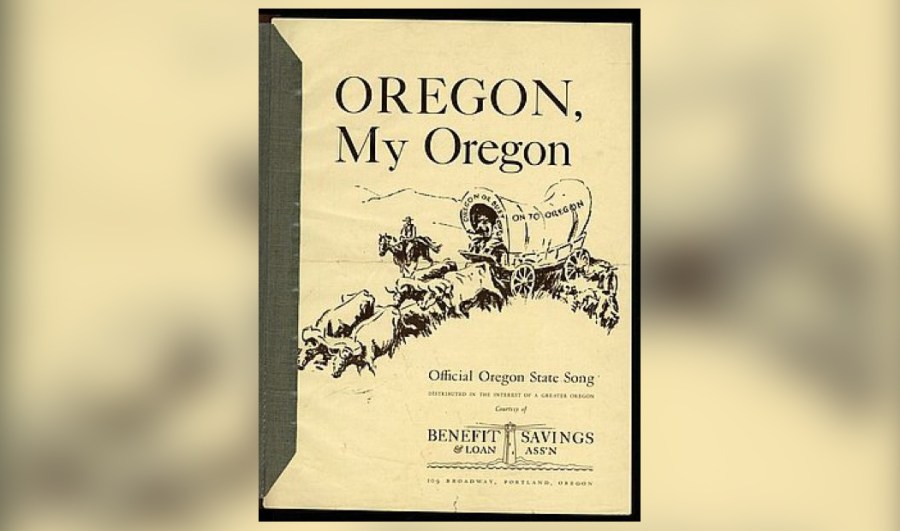 PORTLAND, Ore. (PORTLAND TRIBUNE) -- Oregon's official state song, nearly a century old, is about to get a makeover to remove words that advocates of change say reflect a racist past.

The Oregon House has adopted and sent to the Senate a resolution that changes some of the words to "Oregon, My Oregon," which the Legislature approved as the state song in 1927.

House Concurrent Resolution 11, which passed 47-6 on Friday, April 16, replaces the first verse by J.A. Buchanan: "Land of the Empire Builders, Land of the Golden West/Conquered and held by free men, Fairest and the Best."

It substitutes these words by Amy Shapiro: "Land of Majestic Mountains, Land of the Great Northwest/Forests and rolling rivers, Grandest and the best."

In the second stanza, the phrase "Blest by the blood of martyrs" is replaced by "Blessed by the love of freedom."

Shapiro is a constituent of Rep. Sheri Schouten, D-Beaverton, and the revised lyrics were sung in the House chamber on Feb. 14, 2020, Oregon's 161st anniversary of statehood.

"I was too young to realize that every time we sang those words … we were celebrating the darkest aspects of our state's racist history, and reinforcing it in the present," Schouten said.

"The good news is that we have evolved somewhat and school kids no longer sing those disturbing lyrics … All Oregonians of all ethnic and racial backgrounds deserve a state song they can sing with pride and affection."

Rep. Bill Post, R-Keizer, was one of six who voted against it. Post recalled that in 2017, Buchanan's granddaughter sought his help in raising money for a tombstone for Buchanan at his grave in Warrenton. (Buchanan was in the Oregon House two terms from Southern Oregon, but lived in Astoria in 1920, when he wrote the original lyrics for a competition sponsored by the Society of Oregon Composers.)

Post said he asked her then how she would feel if the lyrics were changed.

"She told me if we did so, It would be like rewriting T.S. Eliot or Shakespeare. The song as is, she said, reflects the period of time and the writer's intention," he said.

"I would find it hard to change the words of a song that schoolchildren have sung for nearly a century."

Rep. Greg Smith, R-Heppner, traces his family roots to the white pioneers who came in the mid-1800s. Ann Elizabeth Bills, his great-great-great grandmother, is credited with sewing the first U.S. flag ever flown in Oregon. He said when he hears the state song, she and people like her come to mind.

"It is special," he said. "And not all of us hear it in a manner that comes across as offensive or racist. So I apologize to those of us who do — but I don't."

Rep. Cedric Hayden, R-Lowell, said he also traces his Oregon roots to the mid-1800s and is a sixth-generation Oregonian. His father, also named Cedric, was in the House 14 years.

"I am concerned with erasing our history because we learn from the mistakes we have made."

Who is the 'fairest'?

Rep. Brian Clem, D-Salem, said he also traces his family heritage to an ancestor who arrived in Oregon in the mid-1800s. He is married to Carol Suzuki, a staffer in the Senate Majority Office, whose father was interned during World War II.

Clem said what struck him was the song's line about the "fairest and the best," when his daughter, then age 8, asked him a question.

"It hit home for me when my own daughter said three years ago — that's not ancient history — 'Do I look white enough to avoid being deported?'" he said.

"That line should not evoke in her the question of whether she is fair enough to avoid what happened to her grandfather, and not get locked up because she looks more like her dad than her mom, and avoid being sent to concentration camps in the desert by the government."

Rep. Andrea Valderrama, D-Portland, said the current lyrics demean Blacks and indigenous tribes. Although Oregon was admitted to the Union in 1859 as an anti-slavery state, its 1857 Constitution also specified that Blacks were unwelcome. (Voters repealed that section in 1926 and removed all racial references in 2002.)

"Written in the 1920s, the song's racist and violent lyrics wrongly and disturbingly celebrate the genocide of the Oregon tribes," Valderrama, the newest member and one of a record nine members of color in the House, said. "This is dehumanizing, insulting and traumatizing. It has no place in our state song. So I ask: Whose Oregon is this song talking about? Because this is not my Oregon."

Rep. Dacia Grayber, D-Portland, said: "What is not sung in this song is the history of our First Nations, people who were brought to this country against their will in the shackles of slavery, and those who have immigrated to make this nation and this state richer and better. It is time for us to sing the history that is reflective of all of Oregon."

Rep. Mark Meek, D-Oregon City, drew notice April 8 when he sang "Lift Every Voice and Sing," often known as the Black national anthem, during a debate on a resolution to designate June 19 as a state holiday. Juneteenth, as it is known, observes the day that slavery was proclaimed at an end in the United States.

Unlike that song, or "America the Beautiful" or "The Star-Spangled Banner," Meek — who is Hispanic — said he feels differently about "Oregon, My Oregon."

"Here's the shame of this: This is our state song, and I don't know how to sing it," he said. "Songs are meant to be sung, and they should be fun songs, songs that you love. I don't know this song, because it does not relate to me."

Rep. Daniel Bonham, R-The Dalles, voted for the change but said he does not fault others who oppose a change.

"I can be honest with you and never considered the words, never actually thought about what we were singing. It was a song about Oregon, about the land that I was from," he said. "I do not know that a song that celebrated only the good times would be a fair and accurate song."

House Concurrent Resolution 11 would set these lyrics for "Oregon, My Oregon":

"Land of Majestic Mountains/Land of the Great Northwest;

"Forests and rolling rivers/Grandest and the best.

"Onward and upward ever,/Forward and on, and on;

"Laden with health and vigor/Fresh from the Western seas.

"Blessed by the love of freedom/Land of the setting sun;